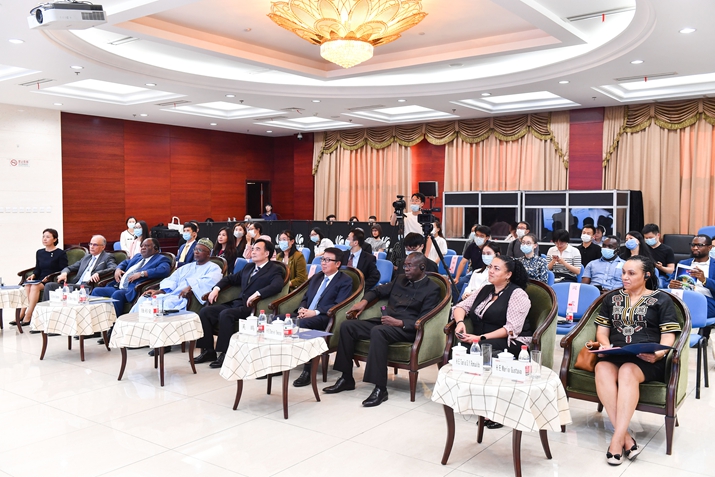 Attendees to the ceremony (WEI YAO)

The 2021 China-Africa Video and Photo Competition was launched in Beijing on May 21. Themed Friendship in Focus, Together for Future, the competition aims to provide a platform for Chinese and African people to communicate through videos and photos.

The competition is co-sponsored by the Secretariat of the Chinese Follow-up Committee of the Forum on China-Africa Cooperation (FOCAC) and China International Publishing Group (CIPG) and co-hosted by BEIJING REVIEW, Yangshipin, CGTN French, and TRASSION’s HippoAD and Vskit, in partnership with Seneweb in Senegal and South African Independent Media Group.

"In the history of traditional friendship between China and Africa, stories of mutual understanding can always touch people’s hearts regardless of time and distance," Lu Cairong, Vice President of CIPG, said in his speech at the ceremony.

Lu said he hopes that the competition would see extensive participation and unveil moving stories about China-Africa friendship and collaboration from various perspectives. He stressed the value of creativity and originality in video and photo works and that of a down-to-earth manner in telling appealing stories.

"I hope that more people from Africa and China will participate in this competition to capture the vivid images of China-Africa practical cooperation and friendly exchanges," he said.

In his speech, Martin Mpana, Dean of the African Diplomatic Corps and Ambassador of Cameroon to China, recognized the inestimable value of photos and videos as a powerful means of communication and in preserving sound and verifiable information for the public, and expressed his support for the competition considering its role in reflecting the joint efforts of Chinese and African governments.

He also encouraged the launch of similar initiatives in Africa to create the conditions for an environment conducive to the development of the image industry and promotion of artistic creation.

"This is one of the ways in which we will be able to show the true face of China-Africa relations, which bears the encouraging mark of an ambitious, fruitful and win-win partnership," he said.

Wu Peng, Secretary General of the Chinese Follow-up Committee of FOCAC and Director General of the Department of African Affairs of the Foreign Ministry, said in his speech that the competition will enhance understanding on the friendship and win-win cooperation between China and Africa, as well as on the vision of a China-Africa community with a shared future, by allowing individuals in China and Africa to share their own stories.

Wu applauded China-Africa solidarity in fighting the pandemic, adding that cooperation between China and Africa has kept progressing despite the pandemic. Citing Chinese President Xi Jinping’s comment on the key role of youth in China-Africa relations, he called on Chinese and African young people to carry forward the great cause of China-Africa friendship.

Li Yafang, President of BEIJING REVIEW, a media outlet under CIPG and one of the organizers of the competition, said in her speech that the media agency’s intensive participation in promoting China-Africa ties has led to the understanding that media-led exhange activities are crucial for enhancing people-to-people bonds between China and Africa. The organization is the publisher of the ChinAfrica monthly magazine dedicated to African readers, and held the first and second editions of the competition.

Piet Rampedi, Editor of Pretoria News of Independent Media Group in South Africa, said in his speech that the competition is important in that it helps counter Western media propaganda that doesn’t reflect the truth about China and China-Africa relations. He added that China and Africa have been enjoying solidarity, which has been further enhanced by their joint fight against the COVID-19 pandemic. Highlighting the role of the media in combating COVID-19, he called for strengthened solidarity across the international community to fight the pandemic.

Danial Oloo, a Kenyan student at Communication University of China, spoke at the ceremony on behalf of contestants of the competition. An active participant of the previous short video competitions held by BEIJING REVIEW, he shared his views on the role of such a competition in promoting understanding between Chinese and African people. "Undoubtedly, there is still a lack of proper understanding about China in foreign countries, and the short video competitions offer Chinese and African people a valuable platform to tell their stories directly," he said.