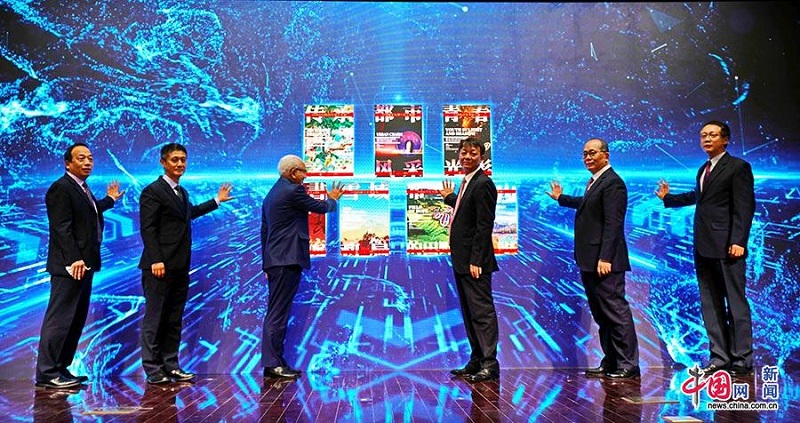 As an annual activity which was launched in 2004, the CTAW focuses on promoting the latest artworks and artistic ideas in contemporary China and enhancing mutual learning and friendship among artists and the public from different countries.

Increased exchanges and mutual learning across the world will inject new momentum into the development and progress of global civilization, Zhang Yanbin, a member of the executive board of the China Federation of Literary and Art Circles (CFLAC), said during his speech at the opening ceremony.

He noted that amid the raging pandemic, people all over the world need art to lift their spirit and artists need to unite more than ever to provide moral support for the global fight against the pandemic through artworks.

Gao Anming, vice president and editor-in-chief of the China International Publishing Group (CIPG), said that the CIPG is committed to promoting exchanges and mutual learning between Chinese and foreign cultures.

To improve cultural exchanges, Gao called for mutual respect, openness and inclusiveness, and the building of bridges for dialogue concerning different literary and arts genres.

Komaki Kurihara, vice president of the Japan-China Cultural Exchange Association, said at the opening ceremony that the association, the CFLAC and the CIPG share a common lofty ideal, which is to promote peace through culture and arts, adding that the CTAW is a valuable opportunity to realize this goal.

Rosa Cervera, honorary president of Cátedra China, expressed her hope that the CTAW can be held in Spain when the pandemic is under control to showcase China's achievements in cultural and artistic fields.

Jose Luis Uribe Ortega, president of the Primera Plana Club, spoke highly of the efforts made by the CFLAC and the CIPG to promote cultural and artistic exchanges between China and the rest of the world by organizing the CTAW events for over a decade.

The online exhibition reminded him of his experiences in China, he said.

She added that she is looking forward to the gathering and experiencing these extraordinary events in person.