A Realer World Through Art - Dialogue with Artist Yang Zhiling 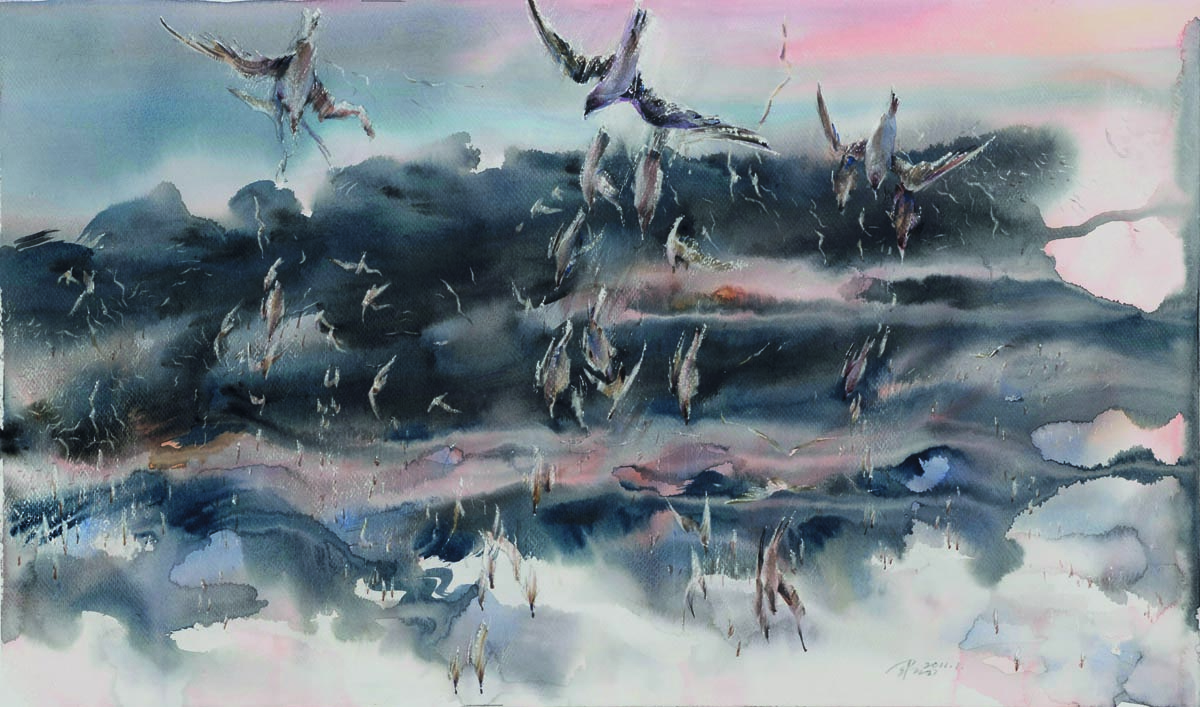 Death of Birds from Yang’s Environmental Protection series. In the painting, high above in the sky, flying birds suddenly die. Starkly contrasting both traditional Chinese paintings of flowers and birds and Western paintings of birds, this piece emphasizes physical conceptions including gravitational acceleration and vertical falling. Using the falling moment of birds, Yang exhibits the eternal theme of inner unity between man and nature, and the theme of realizing sustainable social development on the premise of environmental protection.

Yang Zhiling was born in northern China’s Inner Mongolia Autonomous Region in 1954. When he was a child, he loved Chinese picture storybooks. Legends such as the generals of the Yang family, the great general Yue Fei, and the Magical Brush left a deep impression on him and sowed the seeds of patriotism in his heart. Since childhood, Yang has maintained the goal of praising virtue and punishing vice with his brush. After graduating from the Art Department of Inner Mongolia Normal University, Yang continued studying diligently to broaden his mind. Later, he committed to depicting human lives and destiny in his paintings.

Although Yang majored in art, he has hardly made a living out of it. Instead, he transformed his rich life experience into a unique inner artistic experience. This “aloofness” from art has proved quite valuable, enabling Yang not only to maintain sober observations on the latest artistic trends, but also to gain insight into the role of art in social progress from a broader perspective.

Yang’s work starkly contrasts many contemporary paintings. Presently, the art of painting is dominated by the image of  economic logic and pursues commercial interests. Many artists, both from China and beyond, are devoted to establishing their own artistic languages. However, Yang refuses to symbolize himself, which makes his art stand out. At the same time, through Yang’s work, audience can catch sight of ordinary people’s thoughts and changes in the natural environment.

Yang seldom paints ordinary scenes of life, but strives to exhibit a sense of aliveness and of the people’s well-being. No matter what creative form he adopts for a particular piece, Yang injects his own emotion, feelings, and views on people and the whole world into the work. For example, in his Death of Birds, high above in the sky, flying birds suddenly die. This shocking moment showcases the deformed expansion of human desire, referring to the destructive blows on some species caused by devastated forest vegetation. Using the moment that dead birds fall from the sky, Yang exhibits the eternal theme of the inherent struggle between man and nature.

A decade of artistic experience has gifted Yang with three effective weapons: observation, sketching and experimentation. “Observation” encompasses his study of society. “Sketching” refers to his study of nature. “Experimentation” requires application of scientific principles. On this basis, Yang created new theories and practices including “personified landscape,” “idea reflection,” and “promoting the good.” He believes that even before spectators see a painting, the ideas expressed in the work are already rooted in their subconsciousness. So, when viewers face the piece, the painting quickly activates ideas already embedded in their subconsciousness. Yang hopes to touch the public with art and arouse awareness for promoting social development. These artistic theories are fully embodied in Yang’s works. His works strive to be socially, intellectually and experimentally significant, gifting the audience with a sample of deep and rich philosophies.

Not long ago, China Pictorial (CP) sat down with Yang to discuss his works and his understanding of art.

CP: In your opinion, how many stages can your works be divided into?

Yang: I think there are primarily four periods. The first period was about graphic manifestation. During that period, I worked as a university teacher in Inner Mongolia and participated in China’s National Exhibition of Fine Arts three times, an exhibition at the forefront of Chinese fine arts for decades. I helped restore the murals in the Dazhao Monastery, one of the oldest and largest Tibetan Buddhist monasteries in the city of Hohhot, served as the president of the Inner Mongolia Autonomous Region Watercolor Association, and published many works. The second period was about three-dimensional manifestation. During this stage, I was responsible for design and construction of several dozen important renovation projects, including the Inner Mongolia Hall in the Great Hall of the People. I also received a number of national awards and prizes. During the third period, through integrative recombination of social art, I gradually employed art as a means and foundation to participate in social practice. The fourth period is about enlightenment and change. During this period, I developed theories and practices including “personified landscape,” “idea reflection,” and “promoting the good.” Also during this stage, I became devoted to artistic creation related to the development of human civilization, emphasizing the resonance between the artist’s spirit and the audience and paying close attention to human thoughts and life, which formed my present style. This period has created the results of my “enlightenment” and “change.”

CP: When did you start to make social and environmental challenges the core topics of your artistic creation? Why did this change happen?

Yang: Actually, my aspiration to produce work on social and environmental topics has always been there. However, in the past, I was constrained by the social environment of the time and choices of personal development. During my childhood, influenced by Chinese picture storybooks, I adored and worshiped heroes and made up my mind to praise virtue and punish vice with my brush. Later, after I received a national science and technology award for restoring ancient structures, I became even more determined to protect human civilization, nature, and living beings. You can see such expression in many of my works, including my sketches and those I produced for my own entertainment. For example, my watercolor series on the Zhoushan Archipelago were all named after various winds: Light Air, Light Breeze, Gentle Breeze, Moderate Breeze, and Fresh Breeze. These works depict different wind power through portraying changes of sea waves. And these works were the embodiment of my views on environmental protection at that time.

Now, with China’s social development entering a new era, the country has proposed to build a community of shared future for mankind. Since China is making increasingly greater contributions to human development, its artistic vision and mind should also become more open. I think painters from such a responsible great country should keep the motherland in mind and at the same time look to the whole world. Thus, I decided to make producing artistic works devoted to living beings, global survival and the development of human civilization my lifelong goal.

CP: What is the relationship between creation techniques, manifestation patterns and cultural connotations? What positive effects will exploration and breakthroughs in new artistic media and forms have on easel art?

Yang: Artistic creation is innovation. You need to be different — you can neither copy the masters nor repeat yourself. You shouldn’t compete with science and technology, or clone others, but always stay down-to-earth and be yourself. The purpose of artistic creation is to express public demands and appeals or the feelings of the artist himself or herself. Thus, artists should be bold enough to use whatever forms or techniques are necessary and create new techniques or forms when necessary. All these efforts are for the purpose of producing resonance as well as spiritual connections between the audience and the works.

Just a few years ago, crisis or even the impending death of easel paintings was a hot topic in both academic and artistic circles. “Crisis” or “death” didn’t mean that the number of painters decreased or painting in a particular form disappeared. This form still exists. However, the correlation between painting and society, or, paintings’ ability to reflect life and the times, has weakened. Art gradually became a closed arena, and drifted away from the society that created it. That’s the so-called “crisis” of easel paintings in a nutshell. I tried my best to break through these limitations with my works, and I refused to confine myself to a fortress built with symbols. I challenged established symbols and used all available image resources to get back to the needs of society. Regardless of form, whether easel art, installation or multimedia, art should strive for closer connections with society.