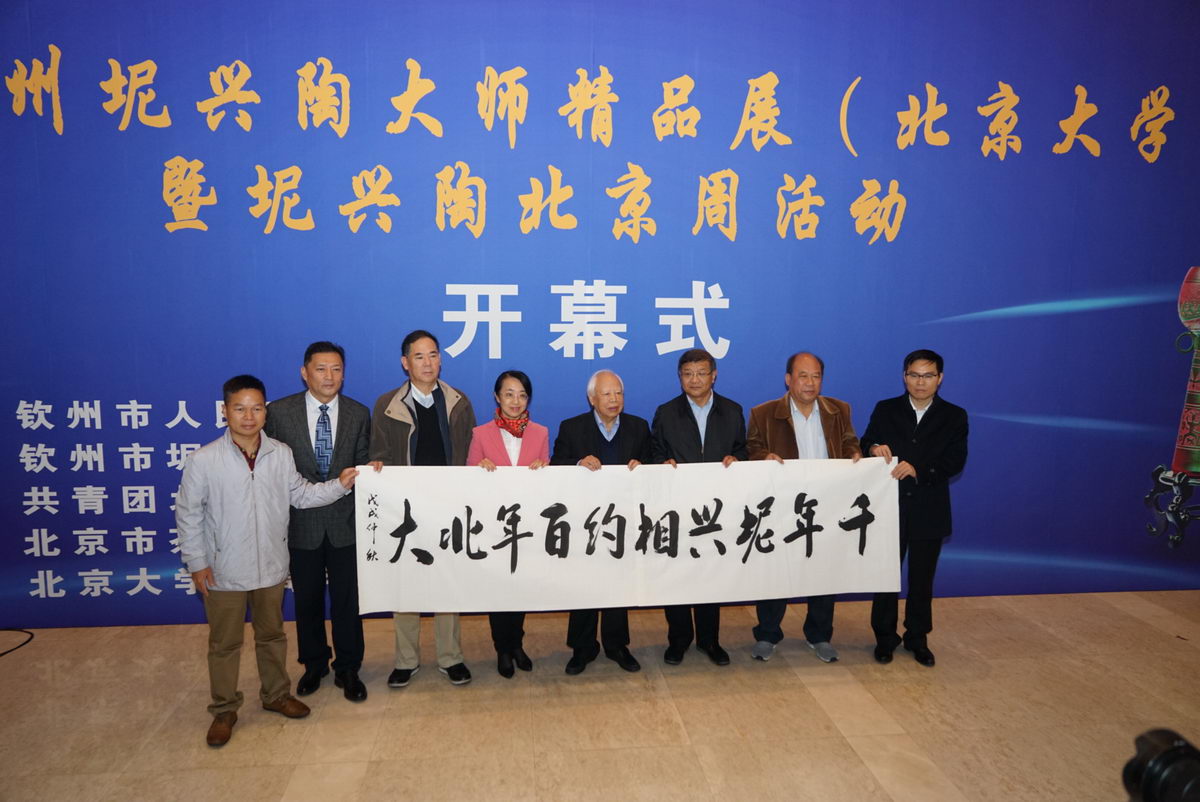 As China celebrates the 40th anniversary of the reform and opening up and welcomes the 60th anniversary of the founding of Guangxi Zhuang Autonomous Region, the country is focused on inheriting and innovating its intangible cultural heritage and revitalizing traditional crafts through the Qinzhou Nixing Pottery Exhibition and the Nixing Pottery Beijing Week at Peking University from November 4 to 8, 2018. The event is hosted by Qinzhou Municipal Government, organized by Qinzhou Nixing Pottery Industry Association, and co-organized by Peking University Communist Youth League Committee and Beijing Tea Enterprise Chamber of Commerce. Photo courtesy of the Publicity Department of Qinzhou Municipal Party Committee

On November 4, 2018, the opening ceremony of the Qinzhou Nixing Pottery Exhibition and the Nixing Pottery Beijing Week was held at the Peking University Hall. Former Secretary of the Party Committee of Peking University and Ph.D. supervisor Wang Debing, as well as Jiang Langlang, standing member of the university’s Party Committee and director of its Publicity Department, attended the opening ceremony. Xu Lijing, member of the Standing Committee of Qinzhou Municipal Party Committee and vice mayor of Qinzhou, and Ma Shengde, former official of the Department of Intangible Cultural Heritage of the Ministry of Culture and Tourism and director of the National Intangible Cultural Heritage Exhibition and Protection Base, were also present and delivered speeches at the event. The ceremony was chaired by Wu Feng, deputy secretary-general of Qinzhou Municipal Party Committee and director of the Qinzhou Liaison Office in Beijing.

In her address, Xu Lijing identified the status and role of Qinzhou as a land and sea hub amid the construction of the southern route of the Belt and Road Initiative and reviewed the course of development and achievements of Qinzhou’s Nixing Pottery. Peking University, considering its sterling academic tradition handed down over generations, shows great enthusiasm toward the development of the cultural heritage, and provides a rare platform for Nixing pottery masters from Qinzhou to exchange with experts and scholars in Beijing. The institution hopes all sectors of society will continue to support Qinzhou Nixing Pottery and strengthen academic exchange and investment cooperation.

At the opening ceremony of the event, Li Renping, a state-level master of arts and crafts, donated his representative work Drum-shaped Vase to Peking University, which was awarded the Seal of Excellence for Handicrafts by UNESCO. Jiang Langlang accepted the gift on behalf of Peking University. Xu Dongdong, a Chinese master of abstract painting, and Zhang Biyong, deputy editor-in-chief of Guangming Daily, served as witnesses.

Nixing Pottery of Qinzhou, with history of over 1,300 years, is one of China’s four most famous potteries. In June 2008, Nixing Pottery was listed as a National Intangible Cultural Heritage. In May 2018, it was ranked among the first group of “national traditional handicrafts to be revitalized.”

A total of 40 masterpieces of Nixing Pottery were displayed at the event. One vase was autographed by leaders of China and ASEAN countries as a symbol of joining hands during the sixth China-ASEAN Expo in 2009. The Drum-shaped Vase,  Lucky Tea Set, and Lotus Teapot that were awarded the Seal of Excellence for Handicrafts by UNESCO in 2008, 2012 and 2016, respectively also went on display along with a variety of exquisite works embodying local conditions and customs of Qinzhou and the rich ethnic characteristics of Guangxi Zhuang Autonomous Region.

A Qinzhou photo exhibition was presented on the second floor of Peking University Hall, showcasing the beautiful scenery and unique customs of Qinzhou.

After the opening ceremony, Qinzhou Nixing Pottery masters and famous cultural experts attended a roundtable dialogue on Nixing Pottery culture and conducted in-depth exchange on the inheritance and innovation of the making techniques of Nixing Pottery, development of the industry, the direction of academic research and product marketing.