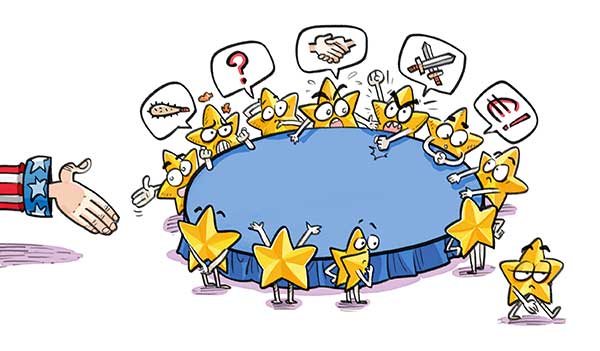 Developing nations wary of US, EU moves
Scan with wechat to share

US President Donald Trump said last week that he and European Commission President Jean-Claude Junker have agreed to hold new talks to discuss the possibility of removing trade barriers. This eased concerns over a US-EU trade war but increased fears that the United States and the European Union could join hands to take trade actions against China.

The US-EU trade talks were more significant from the political point of view, as they eased the fears over a full-scale transatlantic trade war before the US midterm elections, but not so important from the economic perspective.

Still, it is difficult for the US and the EU to reach a tangible agreement to "work together toward zero tariffs, zero non-tariff barriers, and zero subsidies on non-auto industrial goods", as Trump said, because of the contradictory ideas and opinions on the two sides.

Since the EU member states' trade with the US centers on different products and services, they reacted differently to the EU-US talks. While German officials lauded the talks because the US agreed to hold off on further import tariffs on cars and auto parts, which favors a pillar German industry, French officials, including French President Emmanuel Macron, appeared to challenge a deal that would include importing US agricultural products, especially US soybean which many Europeans believe is genetically modified.

For the Trump administration, the possible bulk export of soybean to Europe has eased some pressure as the US provides subsidies worth $12 billion for farmers, even though the hold on tariffs on European cars and auto parts while negotiating the best deal for a "zero-tariff" trade regime will increase the pressure on the US automobile sector. As of now, the US and the EU have agreed only on non-auto industry cooperation.

However, the US-EU discussion on "reforming" the World Trade Organization rules have left many other economies, especially emerging and developing economies, worried that the two sides could work together to change the international trade rules in their favor.

Besides, the Economic Partnership Agreement signed by the EU and Japan on July 17, too, suggests trade conflicts between the developing and developed economies will likely intensify in the future, which would severely affect China.

And since the US, the EU and Japan agree that China has drawbacks when it comes to intellectual property rights protection and government subsidy, they could take joint trade actions against China. So China must deepen domestic reform so it can be in position to counter any possible moves against it by the developed world.

US, EU must improve global trade, not seek narrow gains

Perhaps the rising wave of populism prompted the EU to hold talks with the US in a bid to stop the tit-for-tat tariffs and prevent a US-EU trade war. For example, the 25 percent tariffs that the US had threatened to impose on EU cars and auto parts would have resulted in job losses leading to social problems in countries such as Germany.

But the US did not agree to withdraw the 25 percent tariff on EU steel and 10 percent tariff on aluminum, which used to be a precondition for Brussels to hold any talks with Washington. As such, Brussels seems to have buckled under Washington's pressure, and in the future the two sides could cite common concerns to jointly seek to reform WTO rules.

In fact, tariffs in US-EU trade－or the trade between any two economies engaged in economic cooperation－are bound to fall, as that is what free trade is all about. Also, developed countries will demand a higher "price" for their cooperation as developing countries are becoming increasingly competitive in many fields, including advanced technology, which used to be the domain of the developed countries.

In the long run, emerging economies would seek to upgrade their economies and developed countries strive to hold on to, if not expand, their advantages in the high-end sectors with the help of their technological prowess and innovation capability.

But for the good of both the developed and developing economies, in fact, the world economy as a whole, the two sides should make efforts to clear the clouds of a trade war, and work out and follow the rules for a fair and healthy competition and win-win cooperation.

As for developing countries, China included, they should deepen their cooperation in trade and expand their innovation capability while avoiding harmful competition. By gaining advantage in the fields not dominated by the developed countries, the developing countries can increase their say in global affairs. China, on its part, has to raise the standards of its products and production to the level of Western countries', so as to transform the pressure from the developed economies, especially the US, into an impetus for development, and emerge stronger after the tariff war launched by Trump is over.