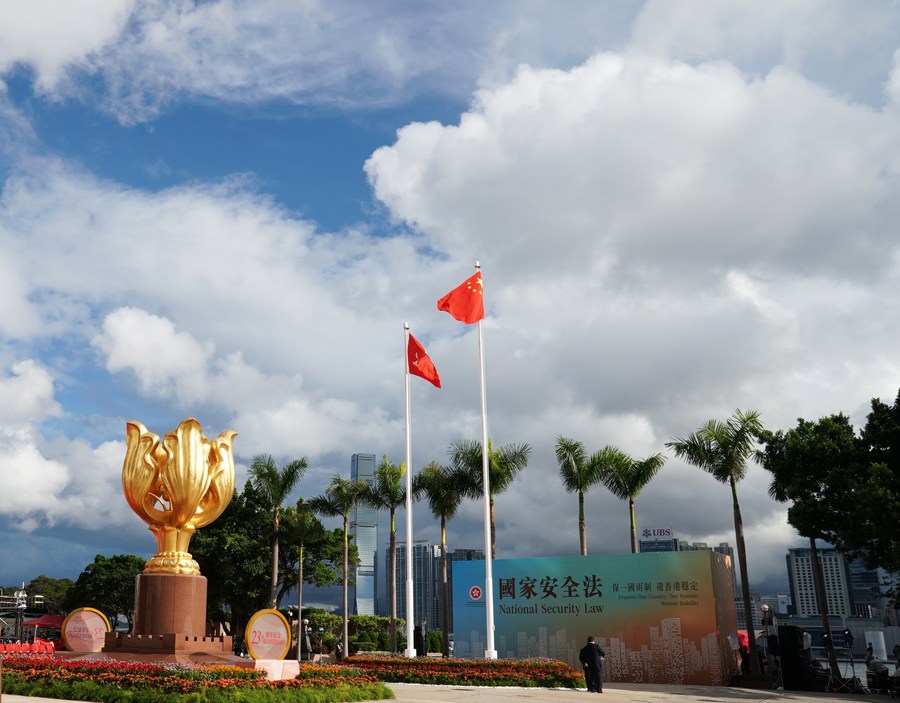 Photo taken on July 1, 2020 shows the Golden Bauhinia Square after a flag-raising ceremony held by the government of the Hong Kong Special Administrative Region in Hong Kong, China.

HONG KONG, March 2 (Xinhua) -- The Department of Justice (DoJ) of the Hong Kong Special Administrative Region (HKSAR) government stressed Tuesday that no one should interfere with independent prosecutorial decisions, responding to the demand for the release of 47 people charged with "conspiring to subvert the state power" under the national security law in the HKSAR.

During the course of legal proceedings, any open demand for the immediate release of the defendants is considered a disrespect of judicial and legal systems, the DoJ said in a statement, adding that it also undermines the rule of law and is seen as an attempt to meddle in Hong Kong's affairs, which are internal affairs of China.

The DoJ reiterated that independent prosecutorial decisions are based on an objective assessment of all admissible evidence, applicable laws and the Prosecution Code, without political considerations.

The national security law in the HKSAR expressly provides that human rights such as freedom of speech and assembly, be protected, and legal principles such as presumption of innocence be respected and observed, the DoJ said.

The DoJ also reminded that it is inappropriate to comment further as the legal proceedings of the case are still ongoing.