How Will 5G Change the World? 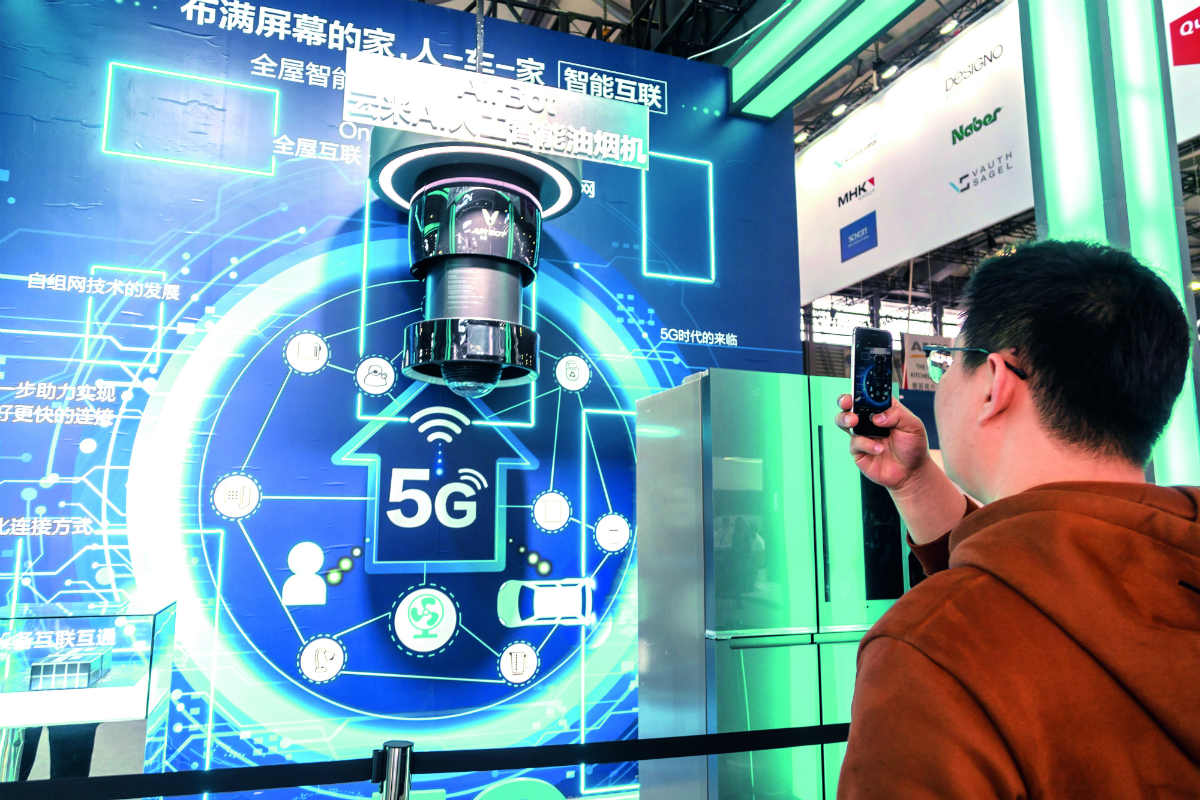 March 14, 2019: A visitor experiences smart home appliances with AI functions at the Appliances and Electronics World Expo in Shanghai. VCG

How Will 5G Change the World?
Scan with wechat to share

The fifth generation of mobile communications (5G) has been hailed as a “new engine for the digital economy.” As the platform for new technologies and industries such as artificial intelligence, the Internet of Things (IoT), cloud computing, blockchain and video social networking, it will provide key support for initiatives such as Made in China 2025 and Industry 4.0. With the help of 5G technology, mankind will enter an era of intelligent internet featuring mobile interconnection, smart sensing, big data and deep learning.

To understand 5G, we must first get to know its application scenarios. According to the 3rd Generation Partnership Project (3GPP), the services foreseen in the 5G era fall into three typical scenarios: Enhanced Mobile Broadband (eMBB) such as 3D/ultra-high-resolution video services, Massive Machine Type Communications (mMTC) such as large-scale IoT deployment and Ultra-Reliable and Low Latency Communications (uRLLC) such as automated driving, industrial automation and other services that require low latency and reliable connection.

Compared to existing mobile broadband services, eMBB can substantially enhance user experience. In the 4G era, users have enjoyed upload speeds of 6Mbps and download speeds of 50Mbps, which have fallen behind demand. The value of eMBB lies in its ability to raise the theoretical speed of mobile broadband up to 1Gbps, greatly improving user experience.

Traditional communications have relatively low requirements on network reliability. However, scenarios like automated driving, industrial robotics, flexible automation and intelligent manufacturing represent higher demand for reliability and latency of mobile communications. The application of uRLLC can meet their demands.

To achieve ultra-reliability, the mobile communications network must operate stably and smoothly, free from external disturbances. The 4G network can achieve a latency as low as 20 milliseconds, but uRLLC can shorten the figure to 1-10 milliseconds. The ultra-reliable, high-security communications capacity of uRLLC can enable self-driving cars and industrial robots to respond immediately the moment they receive commands. The realization of uRLLC requires support from a multitude of technologies such as edge computing and web slicing.

The three typical scenarios of 5G will remove the speed limitations of previous generations of mobile communications and enable users to enjoy faster internet access while using less energy and experiencing lower latency. In some cases, 5G will leave the imagination behind. Moreover, 5G has six basic features that make it superior to its predecessors:

Faster speed. The most obvious difference users feel with every generational change in mobile communications is increase of speed. Compared to its predecessors which measure speeds with MB, 5G can provide an average download speed of 1Gbps, with a peak speed of 10Gbps. After 5G technology is widely applied at intelligent mobile terminals, users’ internet experience will be considerably enhanced. It is noteworthy that alongside cell phones, the 5G network will also support the eMBB scenario. Currently, a variety of terminals for this scenario are under development, which will foster new market opportunities and operational mechanisms.

Ubiquitous networking. Only a ubiquitous network can support increasingly enriched services and scenarios. For example, underground parking lots are usually dead space for mobile signals. Although inconvenient, it remains tolerable today. When automated driving is the norm, self-driving cars would not be able to operate in underground parking lots without mobile signals. Therefore, a pervasive network is necessary.

Ubiquitous networking means full coverage in both width and depth. Full coverage in width means signals should reach any area with human activity including high mountains and deep valleys that previously didn’t need networks. Full coverage of depth refers to high-quality signal coverage. In the 5G era, places like toilets and underground parking lots that used to lack mobile signals will be covered by high-quality mobile networks.

Low energy consumption. With the constant development of technology, network speed is becoming faster and faster, but the power its equipment consumes is also increasing accordingly. To support massive IoT applications, 5G must take this factor into account.

Currently, low energy consumption of those devices is achieved mainly by two solutions: one is eMTC led by American telecommunication equipment giant Qualcomm and the other is NB-IoT led by Chinese telecommunications equipment company Huawei.

To meet the demands of those scenarios, the 5G network must offer ultra-low latency. Technologies such as edge computing are predicted to be applied in the 5G network, enabling it to achieve latency lower than one millisecond. The ultra-low latency of 5G will definitely boost the development of self-driving cars and the Internet of Cars.

Such predictions are based on two reasons: First, in the 5G era, each person or family will have several terminals. A variety of smart devices will emerge and become interconnected via the 5G network to form a real intelligent IoT. In the future, the mobile internet will be ubiquitous. Second, some previously unconnected devices such as automobiles, manhole covers, street lights and dustbins will be connected to the internet and work in a smarter way.

Reshaping the cyberspace safety system. The traditional internet focuses on issues such as data transmission speeds and unimpeded communications, with “freedom, openness and sharing” as its core values. The 5G-based intelligent internet will have more diverse functions and focus on building a new social and living system. For this reason, its core values are identified as “safety, order, efficiency and convenience.”

Safety is the paramount requirement of the intelligent internet. The 5G network must solve safety problems from the bottom up. From the very beginning, the 5G network should introduce a solid safety mechanism and data encryption. The network shouldn’t be totally open, and specialized safety mechanisms should be established for some specific services.

The author is a renowned observer of China’s telecommunications industry, and a mobile internet theorist. This article was excerpted from his book The 5G Era with permission.