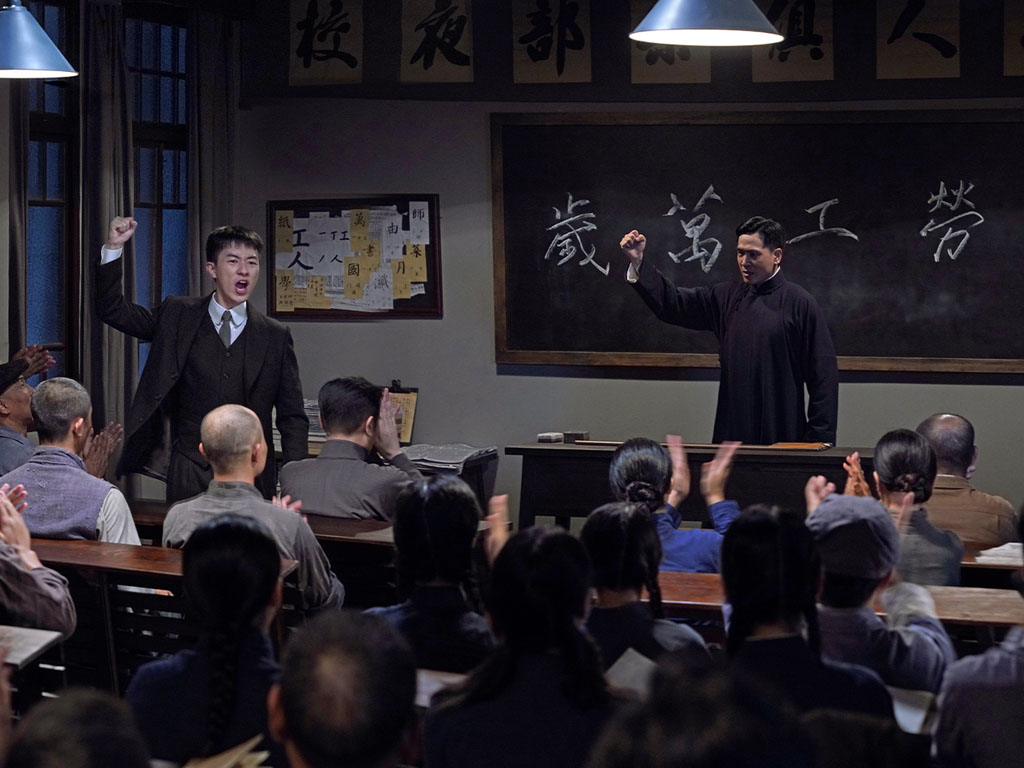 A still from Awakening Age shows Chen Wangdao, translator of the Chinese version of Communist Manifesto, giving a lecture to a group of workers, inspiring them to join social reforms. courtesy of Douban Movie

The First World War entered its second year in 1915. The same year, the emperor of China’s last feudal dynasty, the Qing Dynasty (1644-1911), stepped down after an abdication three years earlier.

“The tallest tree begins as a tiny sprout,” goes the Chinese philosophic classic Tao Te Ching. “A nine-story building starts with a shovel of dirt. A journey of a thousand miles starts with a single step.” China’s recent development has attracted global attention, but the country’s exploration of potential roads to a strong nation started more than 100 years ago. The hit TV series Awakening Age released this year is set in the years spanning the emergence of the New Culture Movement in the 1910s to the founding of the Communist Party of China (CPC) in the 1920s.

The screen is filled with wheelbarrows, bumpy roads, and women in cheongsam, a typical Manchu outfit, outside a city gate of Beijing and under a sky colored yellow by sand in 1915. Such visual elements sought to depict the situation faced by China at that time: As feudal dynasties descended from the stage of history, an inertia nurtured for thousands of years continued.

After 1840, China was attacked repeatedly during the Opium War, the Second Opium War, the First Sino-Japanese War, and the invasion by the Eight-Nation Alliance. Because of aggression by imperialist powers, China lost its tariff autonomy, ceded over one million square kilometers of territory, and paid war reparations approaching the entire size of the economy. China gradually became a semi-feudal and semi-colonial society.

When Japan’s “Twenty-One Demands” (a draft treaty proposed in 1915 by Japan to extend its control of China including aggressive demands to control China’s Shandong, the three northeastern provinces, and the eastern part of Inner Mongolia) was made public, Li Dazhao and Chen Duxiu both returned from Japan to embark on a journey that would result in them becoming key founding members of the CPC. This is how Awakening Age opens.

When executive producer Liu Guohua took the screenplay to director Zhang Yongxin in 2017, Zhang was nervous and hesitant. “I didn’t dare to take the project,” he recalled. “It is such a grand theme. The stories of figures such as Li Dazhao, Chen Duxiu, Lu Xun, Cai Yuanpei, and Hu Shi were widely known. I was worried I couldn’t do justice to them.” By August, Zhang finally realized that he could not pass up the opportunity to make such a significant and valuable production.

“Numerous people came up with myriad methods to save the Qing Dynasty, none of which worked,” sighs Chen Duxiu in the play, which was the depressing reality for Chinese people at that time.

Officials of the Qing government had pinned their hopes on the Westernization Movement, which aimed to arm the country with Western ships and guns. The movement was deemed a total failure when the country lost the First Sino-Japanese War. Kang Youwei and others tried to create a Chinese version of a constitutional monarchy, but those policies barely existed for a hundred days before being strangled by conservative forces. Sun Yat-sen and other revolutionaries overthrew the Qing Dynasty in favor of the Republic of China (1912-1949). But much of the fruits of the young “republic” were quickly pilfered by Yuan Shikai, a former Qing military official.

“To transform China, we must first change the mindsets of the Chinese people,” says Chen in the series while brainstorming methods to save the country. In 1915, Chen Duxiu founded the magazine New Youth in Shanghai, aiming to innovate Chinese thinking and advocate democracy and science. Other prominent figures such as Lu Xun and Hu Shi also contributed to the magazine.

In a dimly lit room, pages of a written manuscript are scattered all over the floor. A man with a wide beard and short hair solemnly writes with a brush on the ground. A meal is placed on the floor next to him. After finishing, he lies on the ground, closes his eyes, and continues clutching the brush. The scene depicts the completion of Diary of a Mad Man, the first vernacular literary work in Chinese history. Ancient Chinese writings were all in classical Chinese, more concise but difficult to understand and ambiguous. Awakening Age vividly illustrates how Lu Xun wrote the novel. Lu remains one of the most influential writers of modern China. His Diary of a Mad Man pointed directly to many of the core problems of traditional Chinese society and fueled strong opposition to feudal ethics.

The main figures of the New Culture Movement and the major founders of the CPC were all real people. Before shooting, Zhang Yongxin checked a lot of facts. When production began, he brought dozens of volumes of their works to the set. He sought to dig out the real personalities behind the historical narratives.

In addition to covering their efforts to save the nation, Awakening Age uncovered less-known but interesting facets of these great people: Li Dazhao built a kang (a heatable brick bed) himself, Chen Duxiu fed his son steamed bread, Hu Shi’s wife took strict care of him, Lu Xun had a renowned sense of humor, and Cai Yuanpei sang songs. The solemn faces found in history textbooks became more lively and relatable in the TV series.

Young Peking University librarian Mao Zedong, dressed in a white gown, munches on chilis while reading Marx’s Communist Manifesto, even though only a translation of some chapters from a Japanese version is available. He is so engrossed in the book that he doesn’t notice the approach of Li Dazhao until they are side by side. Chen Duxiu, Li Dazhao, and Mao Zedong were among the first people in China to be exposed to communist ideas and peer into the country’s future.

Director Zhang Yongxin did meticulous work in casting, costumes, and audio and visual design. In order to relive Beijing that was often hit by sandstorms back then, the crew brought dozens of tons of yellow sand from Zhangjiakou in Hebei Province. Li Dazhao’s beard and glasses, Mao Zedong’s demeanor, and Zhou Enlai’s heroic spirit were all vividly presented.

The earnest efforts of Director Zhang and his crew enabled the series to win a glowing reputation. It fetched an impressive score of 9.3 on the Chinese film and TV review platform Douban. The short video platform Douyin has more than 1.5 billion views on content related to it.

“As a director, I want to speak up about the noble spirit of Chinese people,” said Zhang in an interview. “This was my original intention. Just as Chen Duxiu says in the series: ‘I love this country. This country is not only mine, but also yours. We have to do something for the country.’ This seemingly simple sentiment is essentially the same spirit we embrace as film and television workers.”