Reflection on the Past, Spotlight on the Pathway 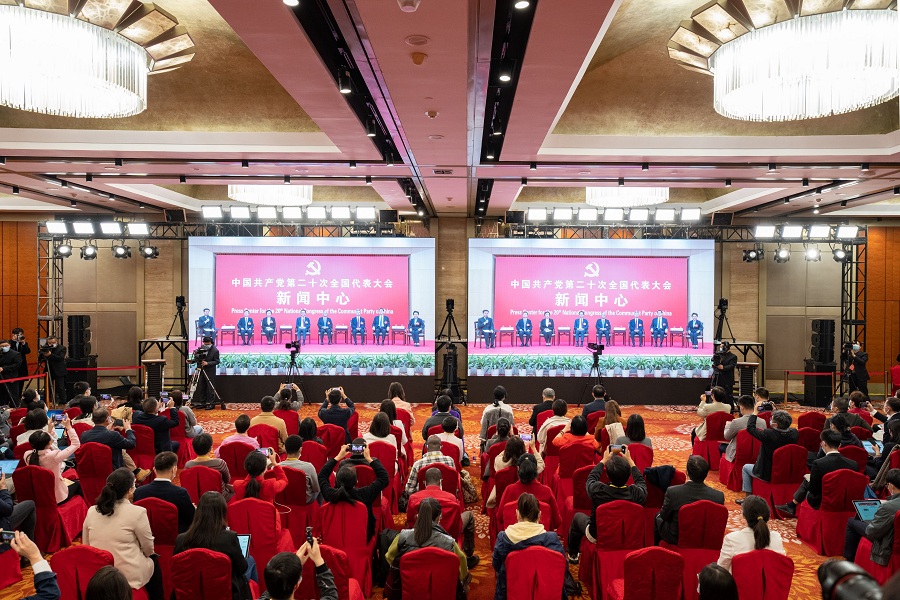 Journalists attend a group interview hosted by the press center for the 20th National Congress of the Communist Party of China via video link in Beijing, capital of China, October 19, 2022. (Photo by Wan Quan/China Pictorial)

Reflection on the Past, Spotlight on the Pathway
Scan with wechat to share

The 20th National Congress of the Communist Party of China (CPC) is underway. The political event is held once every five years as China evolves its governance, strategies, and plans for its people’s wellbeing. Amid the turbulent global situation which is polarizing the international community and intensifying domestic challenges in many countries, the whole world is eyeing on the outcomes of the 20th CPC National Congress. The landmark meeting has the onerous responsibility of steering the Chinese nation through turbulent streams.

It started with a report delivered by Xi Jinping on behalf of the CPC Central Committee on October 16. The report set the tone and tenor of the Congress by reflecting on the past and underscored the vision of the Chinese nation in the new era. It dwelt on all major domestic and international aspects manifesting Chinese achievements and aspirations. The report also responded to the suspicions frequently raised by Western mainstream media over China’s vision, development path and governance pattern.

China is applauded for its people-centric achievements which are reflected in the realization of the First Centenary Goal of “building a moderately prosperous society in all respects.” It has eradicated extreme poverty by lifting hundreds of millions of people out of poverty. Socialism with Chinese characteristics is integral to achieving the Second Centenary Goal; The two-stage strategy (2021-2035 and 2035-2049) has been proposed for building a great modern socialist country that is prosperous, strong, democratic, culturally advanced, harmonious and beautiful.

The neo-liberal market ascendancy proclaims freedom and growth but has resulted in the concentration of wealth in a few hands, freedom and rights in pervasive inequality, and poverty with denial of rights in practice. China’s development model is projected in a different way. The concept of “common prosperity” elaborated in Xi’s report to the 20th CPC National Congress implies fairer income distribution and equality of opportunity, which means increased income of low-income earners and expansion of the middle-income group, and in turn, expands the domestic market and boosts production. Socialism with Chinese characteristics implies enabling everyone in society to have access to opportunities for realization of his or her potentials.

Apart from common prosperity, the report also highlighted high-quality development, green economy, modernization of the military, and technological advancement as main components of China’s developmental model in order to generate national strength and solidarity. Regarding technological advancement, it underlined the need to focus on national strategic needs, gather strength to carry out indigenous and leading scientific and technological research, and thus achieve breakthroughs in key core technologies.

The CPC leadership understands that the reform and opening up unleashed market forces and ignited China’s economy in the past, and will remain steadfast in deepening reform and expanding opening up. The high-quality development is harmonizing different interests and sectors for achieving common prosperity.

Developing countries have high hopes for benefits from China’s development. So far, China has remarkably contributed to infrastructure construction, investment and trade in many developing countries, which helps in poverty alleviation, employment generation and many other aspects in these countries.

China’s steadfast and peaceful development is embedded with the Asian Century, and therefore becomes a subject of envy for dominant powers. The Western mainstream media and hawkish think tanks often stigmatize China’s governance pattern although the country has made its position explicit in a number of whitepapers elaborating on issues including human rights, democracy, poverty eradication, and so on. China’s focus is on “enabling” human rights to all sections of society and all the people. It practices the whole-process people’s democracy in which rigorous electoral process is followed and regular consultation mechanisms are clear cases in point.

Moreover, personal initiative, greater innovation and further opening up of the economy are well recognized in the Chinese growth model. The country also has abiding commitment to multilateralism and the UN system. Obviously, the Chinese development path and governance pattern are different from the neo-liberal order, so the imposition of uniformity of neo-liberal order is bound to generate conflict. The proponents of the neo-liberal order need to change their outdated mindsets on China’s governance system, cultural specificity and socio-economic development which respond to changing circumstances and initiate “dialogue of civilizations.”

The 20th CPC National Congress will take cognizance of critical issues and deliberate upon appropriate plans and sound strategies for the next five years and beyond. China will, therefore, meet expectations and banish suspicions under the leadership of the CPC. Just as Sun Yeli, spokesperson for the 20th CPC National Congress, declared, China and its people “have the confidence, resolve and capability to meet new goals and create greater miracles on the way forward.”

The author is former director and emeritus fellow at the South Asia Studies Centre of the University of Rajasthan in Jaipur, India.