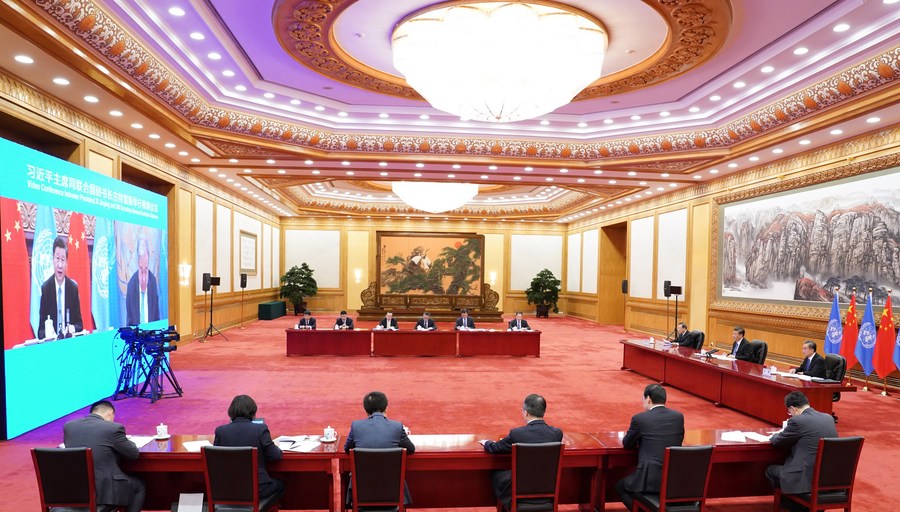 Stabilization Effect of China-UN Cooperation
Scan with wechat to share

The world is undergoing profound changes unseen in a century which have caused great uncertainty in the international community. Global spread of the COVID-19 pandemic has only exacerbated the situation. Considering the severe absence of global consensus, uncertainty itself seems the only global consensus. In such an era, stabilizingfactors and forces are needed to create some certainty.

The United Nations (UN) is celebrating its 75th anniversary. Recently, the Chinese government issued Position Paper of the People’s Republic of China on the 75th Anniversary of the United Nations and a white paper titledChina’s Armed Forces: 30 Years of UN Peacekeeping Operations. Days ago, Chinese President Xi Jinping delivered an important speech at a high-level meeting in honor of the 75th anniversary of the UN. He also addressedthe general debate of the 75th session of the UN General Assembly. The Chinese government and its leaders stressed that China will continuefirmly defending multilateralism and work with other member states to build a better world and a stronger UN through strengthening cooperation with the UN.

Cooperation between China and the UN

Over the past 75 years, the UN has accomplished many great things. Cooperation between the China and the UN has been fruitful and significant over the past half century. In 1971, China returned to the UN, which started a new chapter in the relationship between it and the international body. The UN truly became a universal, representative, and authoritative intergovernmental international organization through China’s admittance. At the time, the UN also served as a window for China to understand the world and vice versa. The UN and other international organizations provided great assistance and support for China after the beginning of its reform and opening up in 1978, which became an important external driving force for China’s modernization. In return, China resolutely supports the work of the UN.

In the late 1980s, China began to actively participate in UN peacekeeping operations. Since the end of the Cold War, especially after the turn of the new century, China has become more and more active within the UN. It has become the second-largest contributor of membership dues and peacekeeping funds and sent the largest number of peacekeepers among the five permanent members of the UN Security Council. In 2015, on the 70th anniversary of the founding of the UN, China announced establishment of the China-UN Peace and Development Fund and other measures and policies to support the organization. These commitments have been fulfilled over the past five years. UN Secretary General AntonioGuterres once commented that China was the “pillar of multilateralism.” Cooperation with the UN has become a central theme of China’s multilateral diplomacy. China’s cooperation with the UN on global issues such as security, development, and human rights has added solid certainty to the future of the world.

The biggest dauntingchallenge facing the UN since its establishment has been hegemonistic behavior and power politics. Today, the UN faces acute challenges in the form of unilateralism and protectionism as global threats occur around the world one after another.

The COVID-19 pandemic has caused a global public health crisis that is bringing severe economic and social impact. The international community needs the UN to become stronger to respond to such emerging challenges, threats, and crises more effectively. China is a major stabilizing force for multilateralism, and cooperation between China and the UN will become a key factor in addressing global challenges. In the field of peace and security, China actively supports the UN in achieving lasting peace through conflict prevention, peace keeping, peace building, and protection of equality. In terms of sustainable development, China not only contributes to the development of the world through its own development, but also shares its development experience and achievements through multilateral assistance programs and South-South cooperation to set an example in promoting the agenda for sustainable development. China is a strong supporter and reliable partner of the UN in dealing with global challenges such as terrorism, financial crises, and climate change. Both sides have found broad space and potential for cooperation in promoting international rule of law, human rights protection, and global governance reform.

Working Together for a Better Future

The COVID-19 outbreak has shown that the core mission of the UN should shift from avoiding future world wars to resolving globally shared concerns. The world is first composed of sovereign states, which are the basic players in international relations. So, addressing challenges facing the world fundamentally depends on sovereign states, which collectively shoulder the central responsibility of solving global problems. Many global problems require resolution through international cooperation and global governance.

The UN is the main platform and mechanism for international cooperation and global governance. It cannot act independently, but can motivate sovereign states to solve problems. This leadership includes promoting the global agenda for sustainable development and climate change governance, formulating international norms and rules through specialized agencies, and coordinating various forces to provide public goods.

China-UN cooperation has created considerable opportunities. Their joint efforts in building a community with a shared future for humanity and a new type of international relations are conducive to promoting unity and consensus in the international community. Joint construction of the Belt and Road Initiative will greatly help promote the 2030 Agenda for Sustainable Development. In a context of increasing competition among big powers, rising geopolitical confrontation, and mounting unilateralism, cooperation between China and the UN will become a stabilizingfactor that averts imbalance and disorder in the international community.

Whether the choice is multilateralism or unilateralism, unity and cooperation or division and confrontation, interconnection or decoupling, the international community stands at a crossroads for future development. As a staunch supporter and major participant in the cause of the UN, China is kindling new hope for the post-pandemic world through cooperation with the UN.

The author is a professor and director of the Center for the United Nations and International Organizations at Fudan University.