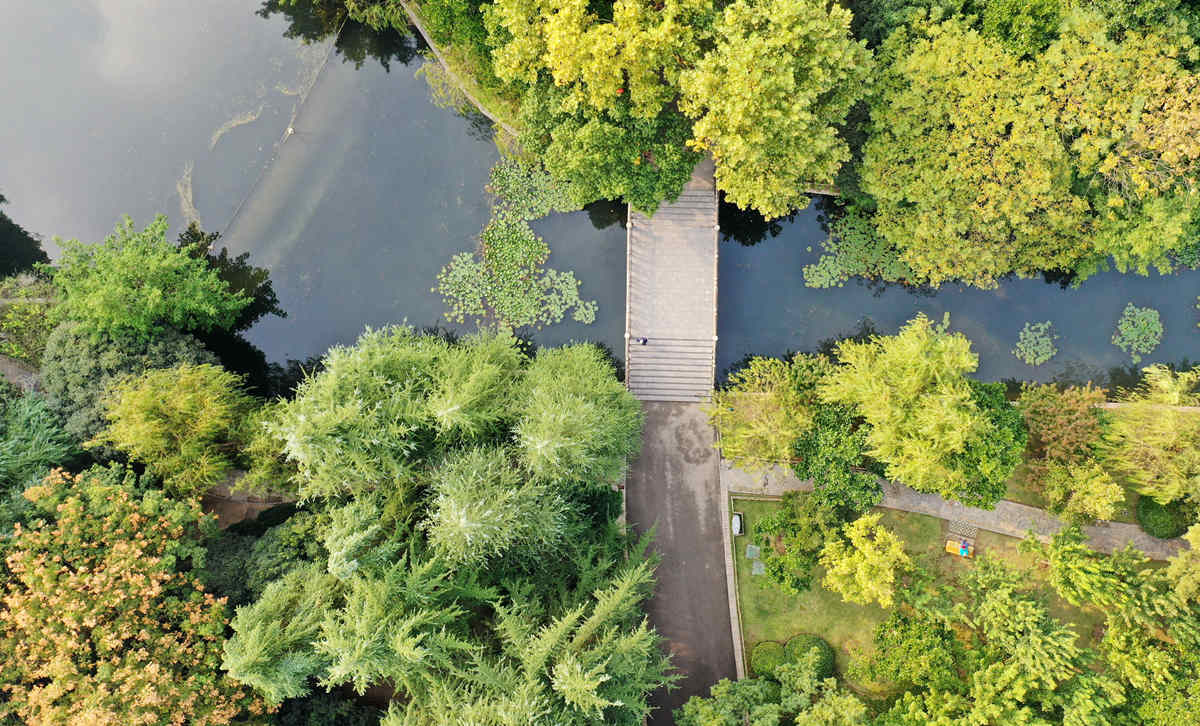 October 21, 2021: An aerial view of an urban park in autumn in Hefei, eastern China’s Anhui Province. If some green spaces in Chinese cities can be designated as wildlife habitats, they can form an important carrier of urban biodiversity. VCG

Beijing Forestry University, once bustling with people, was like a ghost town in the first half of 2020 due to COVID-19. When the spring came to an end, many were caught by the pleasant surprise of cute hedgehogs moving onto campus. The little animals usually live in rural wastelands and shrubs undisturbed by human activity. Their emergence in a high-density urban area evidenced enhanced urban biodiversity, although probably temporarily.

Urban biodiversity refers to the variety of living species in a city, including plants, animals, bacteria, and fungi. A variety of organisms ensure the ecological balance of the city ecosystems and play a major role in regulating urban climate, assisting the water cycle, improving water quality, and maintaining soil fertility. A city with rich biodiversity is likely to preserve ecosystem stability.

Urban biodiversity is also closely related to the lives and health of urban residents. Scientific research has shown that compared to those raised in the countryside, urban children are more likely to develop allergies during certain seasons. The reason is that the microbes in the countryside are far more diverse and complex than those in cities. Exposure to higher diversity of microbes helps children in rural areas adapt more easily when their immune systems have combated harmful microbes. People who grow up in cities have less exposure to microbes, so they are more likely to fall ill once when they encounter certain microbes that have never previously triggered an immune response.

Urban biodiversity is based on ecological complexity. Realizing urban biodiversity to some extent isn’t hard even after the original ecosystem, hydrological processes, and landforms might have been changed by urban expansion, leaving the natural space limited and fragmented.

The emergence of wild hedgehogs on the campus during the epidemic was a wonderful case. It proves that certain pieces of land would become attractive habitats for native plants and animals to survive and sustain once they are free from human interference.

Green spaces including parks, greenways, and waterfronts in Chinese cities provide recreational areas for residents and help with ecological protection. If some can be designated as wildlife habitats to allow species of ecological communities to grow and evolve freely, they can form an important carrier of urban biodiversity for animals and plants. Such programs can help residents observe and understand what natural land originally looked like before human interference.

From 1999 to 2003, large-scale dredging was performed in Hangzhou’s famous West Lake. The silt was transported to a valley called Jiangyangfan about two kilometers away, and the sediment volume reached about 1 million cubic meters. As time passed, the seeds of aquatic and terrestrial plants gradually germinated in the siltation, forming a messy but vigorous landscape in the wild. In 2008, Jiangyangfan Ecological Park was built on the abandoned silt reservoir. Landscape architects in the urban ecological park simulated regeneration of the natural ecosystem. Today, the park is home to dozens of species of birds, wild fish, crayfish, and crabs. Scientists have also discovered 42 species of butterflies there.

The park is located in a valley with favorable natural conditions, but biodiversity is also possible even in densely-populated urban areas. Danish architect Stig Andersson designed six small-scale projects in Copenhagen. Alongside functional usage, the landscape architecture either simulated the native plant communities to create a wild space in the city or transformed the original park into a quasi-natural habitat to enhance biological diversity and ecological services, providing a diverse environment for urban flora and fauna. This inspired China’s small-scale urban greening projects to simulate natural communities to build a dynamic and naturally growing landscape in cities, instead of designs based on visual preferences and traditional aesthetics.

Manifestations of biodiversity differ based on various geographic locations and climatic conditions of cities. Human beings have competed and coexisted with other living species in nature since their rise. Biodiversity should not only be considered ideal for a city, but also central to everyday life.