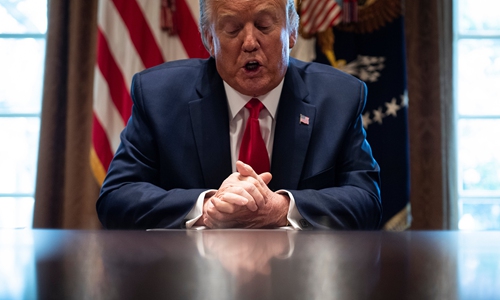 US President Donald Trump makes a statement for the press after a meeting with nursing industry representatives in the Roosevelt Room of the White House about the COVID-19 pandemic on Wednesday in Washington, DC. Photo: AFP

US President Donald Trump has labeled the COVID-19 a "Chinese virus." After receiving tons of criticism, he still tried to defend himself, saying that "It's not racist at all." However, anyone with common sense will find this term insulting. The US is provoking racial discrimination, and the trend may become more serious as racism spreads to other parts of the world.In the US, there has always been discrimination against Chinese people or Chinese Americans. And because of Trump's racist remarks, Chinese Americans and Chinese people in the US are facing an even more difficult situation. There have been more reports of discrimination against Chinese Americans and even Asian Americans in the US. Trump has put these people at risk.As US president, Trump should have tried his best to protect American people's lives, rather than spread xenophobia and racism. If Trump believes the term "Chinese virus" is justified only because "it comes from China," and the CDC admitted the 2009 H1N1 flu was detected first in the US, shall we call it the "US flu"? We can imagine how the US would criticize China for racism if high-level Chinese leaders used that term.There is a long history of white supremacy and racism in the US. Studies have proven that an economic downturn can make people even more racist, which is partly because of the increasing unemployment rate. The Chinese Exclusion Act was passed in the US in 1882 because American people believed Chinese laborers were snatching job opportunities. As the US stock market has experienced four circuit breakers over the last two weeks, the unemployment rate will rise and racism will become a problem that should have been given attention at this time. However, Trump has used it to attract more votes.Controlling the epidemic and raising people's awareness of protection are the most important issues for the US. The number of confirmed cases in the US soared past 10,000 as of Thursday morning. However, some 40 people still gathered in New Mexico for an "Alcoholics Anonymous meeting" on Wednesday, according to Reuters. What's worse, many American people believe that the Chinese people who wear face masks are infected. These Americans' ignorance has combined with racism, becoming the biggest obstacle to US epidemic prevention.This is the globalization era, no matter how Trump dislikes it. COVID-19 has been declared a pandemic by the WHO, which means the virus cannot be stopped by walls or national borders. All countries need to work together to get through this difficult time. The racism hyped by Trump may spread to other countries. Chinese people and people from other Asian countries may face a very difficult time. Trump is responsible for it, but it seems he does not care whether Asian people would be discriminated and hated because of his words. It would be unfortunate if this public health crisis turns into racial hatred.As the COVID-19 spreads further, people should not attack each other. Trump should stop his blame game and focus on epidemic prevention, because finding scapegoats cannot cover up the fact that he has not responded properly to the epidemic.