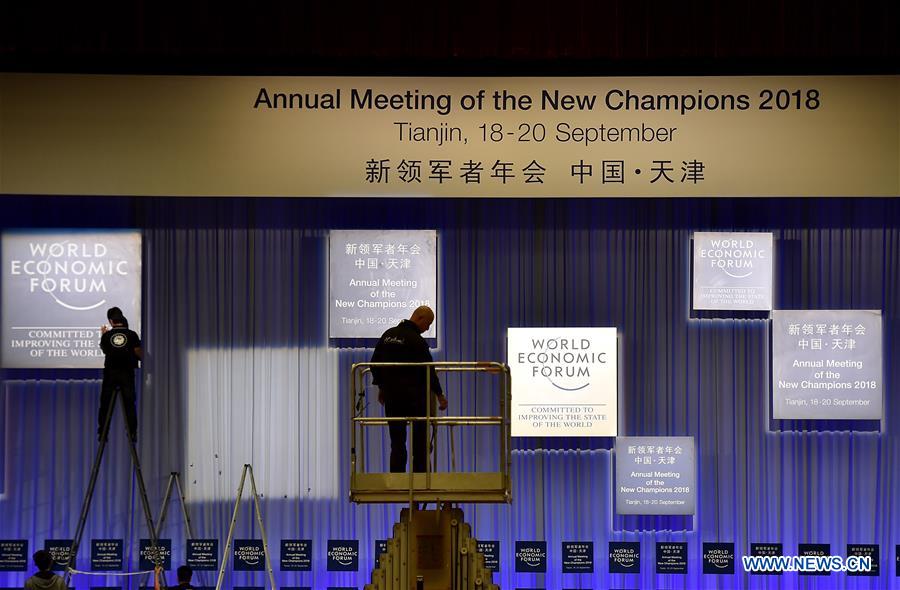 Workers decorate the venue at Meijiang Convention and Exhibition Center in Tianjin, north China, Sept. 17, 2018. The Annual Meeting of the New Champions of the World Economic Forum (WEF), also known as Summer Davos, is set to kick off on Sept. 18 in Tianjin. This year's forum will feature a theme of "Shaping Innovative Societies in the Fourth Industrial Revolution." (Xinhua/Yue Yuewei)

Over the past 40 years, there have been many critics and pessimists who always forecasted that China's economic growth would come to an end, but they turned to be wrong, Schwab told Xinhua in Tianjin ahead of the Annual Meeting of the New Champions 2018, also known as Summer Davos.

"I remain optimistic," he added.

China's GDP expanded 6.8 percent in the first half of the year, above the government's annual target of around 6.5 percent. The growth has remained between 6.7 percent and 6.9 percent for 12 consecutive quarters, highlighting its economic resilience.

Schwab pointed out that the world economy is facing many challenges, such as trade frictions, possible downturn due to the natural economic cycle, debt problems and the impact of global warming.

Countries should recognize the challenges, join forces and eliminate the risks in the global cooperation, he added.

When recalling his first visit to China around 40 years ago, Schwab admitted that "it was very different. It was a poor country."

China launched its reform and opening up policy in 1978. The long-held policy has not only brought rapid and sustainable development but also enabled the country to have contributed greater momentum to the global economy.

Calculated with constant prices, China's GDP rose 33.5 times in the 1978-2017 period, representing average annual growth of 9.5 percent, much higher than the world average of about 2.9 percent during the same period.

But GDP growth is not China's only concern, as Schwab put it, China has also realized the importance of improving people's lives and protecting the environment.

To play a better role in the world economic arena, he suggested the Chinese government be responsive and responsible and take on certain social responsibilities and obligations on a global level to help make the global system more open.

To help China further integrate into the world economy, the first China International Import Expo, the world's first import-themed national-level expo, will be held in November.

"It's very important. We need open markets, but we also need a certain equilibrium between exports and imports to safeguard global peaceful and collaborative relations," Schwab said.

Established by the World Economic Forum in 2007, the Summer Davos Forum is held annually in China, alternating between the two port cities of Tianjin and Dalian.

Themed "Shaping Innovative Societies in the Fourth Industrial Revolution," nearly 200 meetings will be held from Tuesday to Thursday. More than 2,000 politicians, businesspeople, scholars, and media representatives will attend the event.

Schwab sees innovation as the most important factor for competitiveness in the future.

"Competition of the future will be not so much based on the ability to produce with low costs. It will be determined by being the first in adapting and adopting new innovative products and services," he explained.

To shape China into an innovative society, he encouraged the country to foster more startups, build more infrastructure, and help people understand the changes will ultimately benefit their lives.