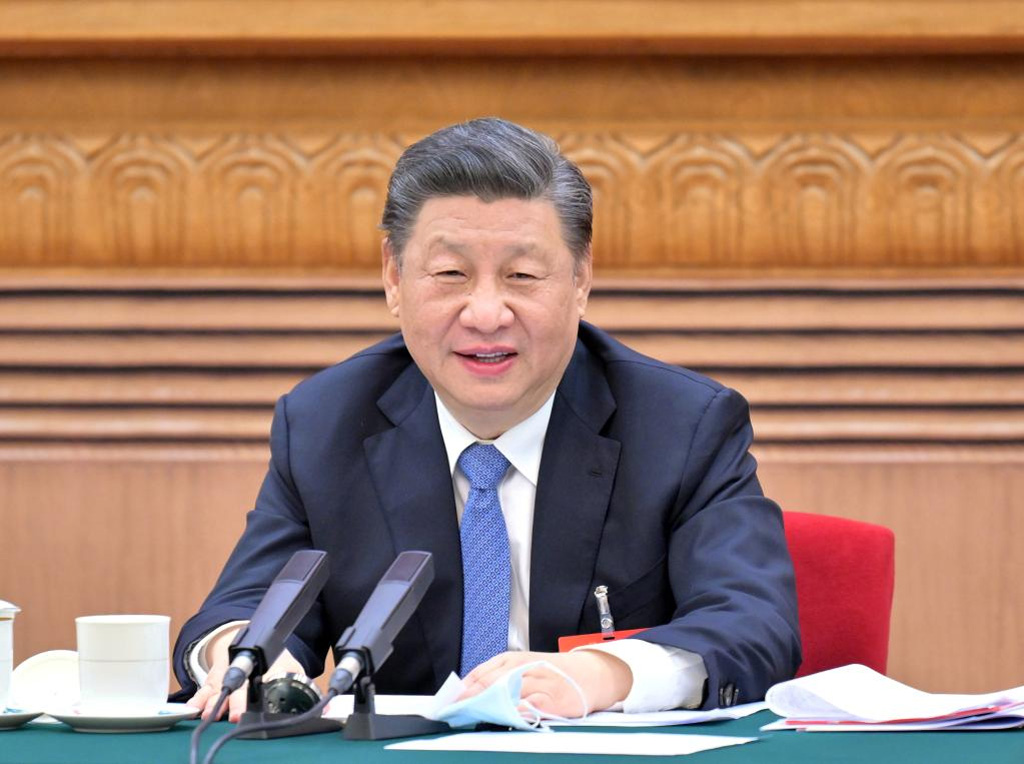 Chinese President Xi Jinping, also general secretary of the Communist Party of China Central Committee and chairman of the Central Military Commission, takes part in a deliberation with his fellow deputies from the delegation of Inner Mongolia Autonomous Region, at the fifth session of the 13th National People's Congress (NPC) in Beijing, capital of China, March 5, 2022. (Xinhua/Li Tao)

Xi Jinping, General Secretary of the Central Committee of the Communist Party of China (CPC), President of the People's Republic of China and Chairman of the Central Military Commission, participated in the Inner Mongolia Autonomous Region delegation's deliberation at the Fifth Session of the 13th National People's Congress on Saturday.

Xi himself is a member of the delegation. He stressed that ethnic unity is the lifeline of all ethnic groups in the country and a strong sense of community is key to ethnic unity. Efforts must be made to strengthen such sense by furthering education on ethnic unity, he added. Efforts should also be made to let people cultivate the awareness that people from all ethnicities are in the same community, where they share weel and woe, stick together in life and death, Xi said. Seeds in a pomegranate are what Xi used to describe how all ethnic groups can stick together as long as the sense of Chinese nation as a community being the foundation for ethnic unity can be laid. Only with ethnic unity will people from all ethnic groups join hands in building our country, Xi said. A stable and healthy economic environment is important, and so is social stability and political integrity. Ethnic unity is essential to all these, Xi said. We must do a good job in all areas to greet the convening of the 20th National Congress of the CPC, he said.

The atmosphere was warm and active in the delegation's panel deliberation. Deputies Zhang Lei, Guo Yanling, Jia Run'an, Wang Xiaohong, Feng Yanli, Zhao Huijie and Shi Yudong shared their opinions with others on how the new development philosophy can be carried out in an accurate, extensive and down-to-earth manner in the conservation of grassland ecology. They also talked about how the philosophy can be materialized in furthering the coal chemical industry to contribute to carbon emissions peaking and carbon neutrality. Cultivating a sense of community for the Chinese nation can be integrated into the entire process of school education, they said. High-quality development, rural revitalization and better development of the dairy industry are also topics they talked about. Xi took down notes of what they said and once in a while would put in a word.

Having listened carefully to the deputies, Xi made a speech. First, he expressed approval of the Report on the Work of the Government and recognition of Inner Mongolia's work in the past year. He hoped that the people in Inner Mongolia would resolutely implement the decisions and arrangements of the CPC Central Committee, coordinate efforts in epidemic control and economic and social development, unswervingly follow the path of high-quality development that prioritizes ecological conservation and pursues green development, and fully fulfill their political responsibilities of safeguarding national ecological, energy, food and industrial security. He also hoped the region would forge a strong sense of community for the Chinese nation, push forward the full and rigorous self-governance of the Party, add more charm to the northern border region, and write a new chapter of high-quality development in the new era.

In 2021, China has made comprehensive advancements in reform, development and stability, with new and major achievements attained in the pursuit of the cause of the Party and the country, Xi noted. The CPC has solemnly celebrated the 100th anniversary of the founding of the Party, carried out the initiatives to study the Party's history, held the sixth plenary session of its 19th Central Committee, and adopted a resolution on the Party's historical experience and achievements over the past century. Having won the critical battle against poverty and completed the building of a moderately prosperous society in all respects on schedule, China is striding forward on a new journey toward the second centenary goal of fully building a modern socialist country. Always putting the people and their lives first, China has guarded against both imported COVID-19 cases and domestic resurgences, and adhered to a dynamic zero-COVID approach in a science-based and targeted way. While ensuring constant efforts on routine epidemic prevention and control, China has maintained a leading position in both economic growth rate and epidemic control globally, and got the 14th Five-Year Plan off to a good start. China has also successfully hosted the Beijing 2022 Winter Olympic Games by presenting a simple, safe and splendid event to the world. The Chinese athletes strived and achieved the country's best-ever results at the Winter Games. These achievements bear a great significance to the pursuit of the cause of the Party and the country.

Xi Jinping stressed that, in reviewing the Party and the people's endeavors in the new era, we have acquired a stronger understanding of the following:

First of all, upholding the overall Party leadership is the path we must take to stick to and develop socialism with Chinese characteristics. As long as we unswervingly uphold the overall Party leadership and safeguard the Party Central Committee's authority and centralized, unified leadership, we will definitely be able to ensure that the whole Party and the country have the strong political cohesiveness to unite the people to work together, develop confidence, bring together the strong power of innovation on the basis of what has been done in the past and unity as one to surmount all difficulties, and form an anchor for the nation in the face of adversity.

Second, socialism with Chinese characteristics is the path we must take to realize the rejuvenation of the Chinese nation. As long as we unwaveringly keep to the path of socialism with Chinese characteristics, we will definitely be able to consistently see our people realize their aspirations for a better life and promote common prosperity for all the people.

Third, working hard in unity is the path the Chinese people must take to make historic achievements. As long as the people from all ethnic groups across the country, under the Party's leadership, unite together with one heart and one mind and bravely and readily stand out for ourselves, we will definitely be able to overcome all the difficulties and challenges on our road ahead, and continue to create new impressive miracles.

Fifth, exercising full and rigorous self-governance of the Party is the path we must take to maintain the Party's vigor and vitality and ensure its success on the new journey. China's success hinges on the Party and its self-governance. As long as we make great efforts to carry forward the great founding spirit of the Party, stay true to our founding mission, have the courage to reform ourselves, consistently remove all elements that harm the Party's advanced nature and integrity and eliminate all viruses that erode its health, we will definitely be able to ensure that the Party preserves its essence, color and character.

Xi pointed out that China is a unified nation of many ethnic groups. Only when all ethnic groups live in unity and harmony can there be a prosperous country, a stable society and a happy people. Without ethnic unity and harmony, the country would decline, society would be destabilized and the people would suffer. The CPC Central Committee has made fostering a strong sense of community for the Chinese nation the main task in its work related to ethnic affairs in the new era. It is a major decision made to maintain the great unity of the Chinese nation and to realize the Chinese Dream of national rejuvenation. It is also an important conclusion drawn from a thorough review of the historical experience and lessons.

Xi stressed that what Inner Mongolia has achieved today is the results of the concerted efforts of people of all ethnic groups, and the bright future of the autonomous region would not be achieved without the unity and hard work of people of all ethnic groups. To foster a strong sense of community for the Chinese nation, we should not only deliver work that can be seen and felt, but also make much "inconspicuous and subtle" efforts. In order to foster a shared sense of belonging for the Chinese nation and to promote exchanges, interactions and integration among different ethnic groups, we should do various concrete and detailed work that can be seen and felt and be effective. Officials of all ethnic groups should fully comprehend and carry out the Party's ethnic theories and policies, and always bear in mind the overall work of the Party and the country and the overall interests of the Chinese nation when contemplating a problem, making a decision and doing their work. Any work that is conducive to fostering a strong sense of community for the Chinese nation should be done in a thorough, detailed and concrete manner. Any activity that is harmful to fostering such sense should be resolutely forbidden.

Xi pointed out that Inner Mongolia, as a border area with a large ethnic minority population, shoulders a major responsibility for safeguarding ethnic solidarity and the stability of our border. We should tell big pictures from observing details, be more mindful of difficulties ahead, maintain a strategic perspective, and take effective measures to guard against all types of risks and hidden dangers in the work related to ethnic affairs and ensure the security and stability on the north border of our country.

Xi also stressed that it is essential to respond to the COVID-19 and pursue economic and social development in a well-coordinated way. We should put into effect all measures for routine epidemic prevention and control, improve the mechanisms for routine containment and emergency response, give priority to epidemic control at port-of-entry areas, and ensure that no large-scale resurgences arise. We will take proactive and prudent steps to advance carbon emissions peaking and carbon neutrality initiatives. In light of our country's energy situation rich in coal and poor in oil and gas resources, we should act on the national plans and arrangements for carbon emissions peaking and carbon neutrality, apply systems thinking, stay committed to the principle of pursuing progress while ensuring stability step by step, and coordinate efforts to reduce carbon emissions, address pollution, promote green development, and maintain continued growth. When carrying out carbon reductions, we must also ensure the security of energy, food, and industrial and supply chains, as well as the normal life and work of our people. We must not distant ourselves from realities and rush for quick results.

With the attitude and resolve to persevere in the never-ending fight against corruption, we have made integrated efforts to see that officials do not have the opportunity, desire, or audacity to engage in corruption. We remain firm in fighting corruption, removing its roots, and clearing away its negative influence. We will make strictly carrying out intra-Party political activities as the basic groundwork for further ensuring full and rigorous self-governance of the Party, and work faster to ensure intra-Party political activities are carried out in a healthy and procedure-based way, Xi said.

We will consolidate what we have achieved in studying the history of the CPC, set up long-term institutions, and educate and guide Party members and officials in taking the study and application of the CPC history as a lifelong compulsory task. We will remain confident in our history, raise our political awareness, carry forward the great founding spirit of the CPC, and forge ahead with confident strides on the new journey and make still greater achievements in the new era, Xi said.