An Archaeological Journal at Sanxingdui Ruins 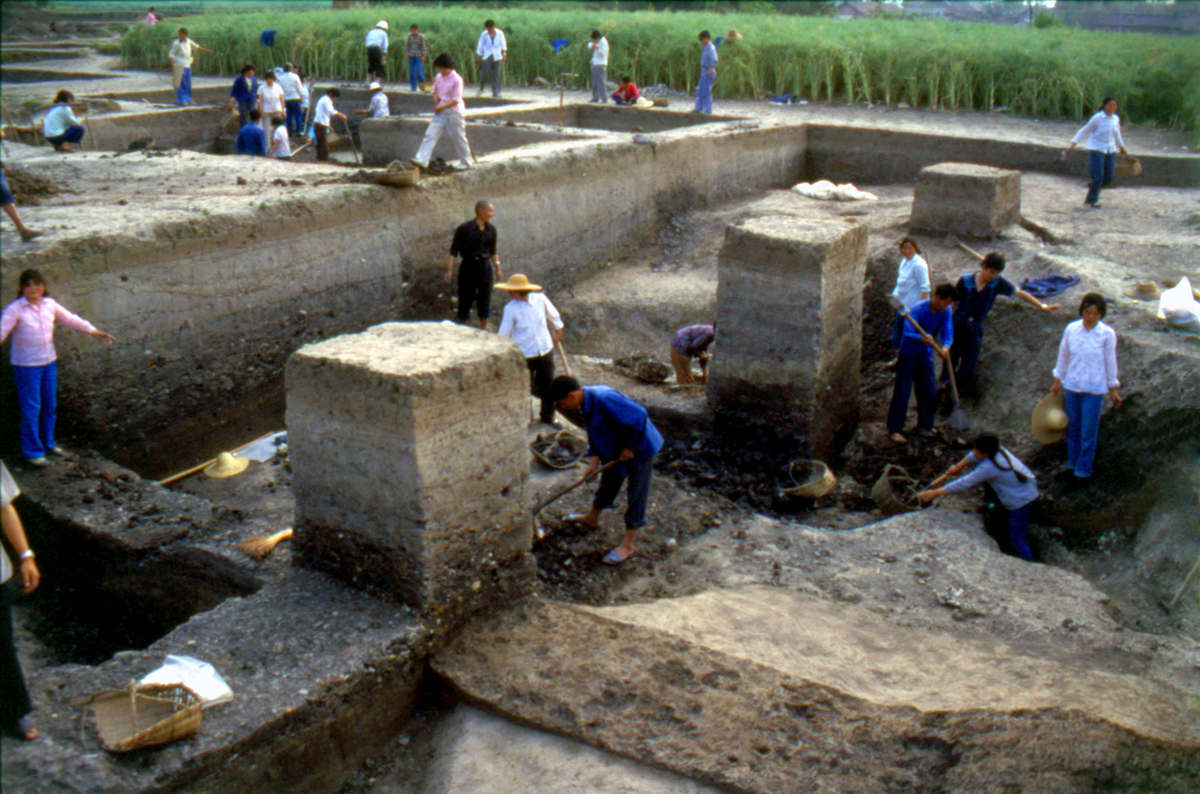 In the 1980s, the Sanxingdui Ruins became a sensation after the discovery of 7,000 relics including gold and bronze vessels and jade and ivory pieces in its No.1 and No.2 sacrificial pits. This is the site of the first large-scale excavation of the Sanxingdui Ruins.

An Archaeological Journal at Sanxingdui Ruins
Scan with wechat to share

My life became inextricably bound to the Sanxingdui Ruins after my participation in its first excavation in the late autumn of 1980. When our excavation team was working at the site in 1981 and 1982, curious villagers and brickyard workers would often come around to see if we dug up any valuable objects. They were disappointed and puzzled to see us handling pottery shards and stoneware and advised us that our efforts were “worthless.” They didn’t realize that the pottery and stone pieces were key evidences of the ancient Shu Kingdom civilization from as early as the 13th century B.C.

At about 5 p.m. on July 18, 1986, a local worker excavating clay for bricks came to notify us that he saw jade as we was sorting archaeological materials around an old-fashioned square table. We hurried to the site with him and determined there were jade objects covered by black cinder. Our first instinct was that it would likely be a significant discovery, so we launched a rescue excavation with around-the-clock digging in the sacrificial pit.

At 2:30 a.m. on July 30, 1986, I was cleaning the western side of the middle of the pit with bamboo sticks and brushes. I noticed something yellow under dark debris. I continued cleaning and digging until 3 centimeters of the artifact was seen. I realized it was made of gold and ornamented with fish patterns and other carvings. The more I dug and cleaned, the more excited I became.

Then my colleagues and I saw the pattern of two birds. Between the necks of the birds and the head of the fish is an arrow-like or spike-like object. Later, an image of heads of smiling men, each with a crown and earrings, was uncovered. I was sure that the discovery of the relic would be very important for archaeological history even when half of it was still buried. It was later identified as a gold scepter used by the ruler of the Shu Kingdom as a symbol of power. The discovery of the gold scepter changed the previous opinion that the nine-tripod cauldron was the unique symbol of the authority of the ruler in ancient China.

At around 6 p.m. on August 14, 1986, several brickyard workers rushed to my place to urge me to come to see what they dug up. I immediately put aside what I was doing and ran to the site.

Indeed, they had discovered a new pit near the No.1 sacrificial pit. I asked the workers to stop digging the mounds and cover the site with earth. Then, I arranged for the site to be taped off while naming it the No.2 sacrificial pit.

After digging day and night, on the morning of August 26, we uncovered a large semicircular bronze ware decorated with ivory. More cultural relics followed including a bronze head, two bronze vessels, one big bronze bird head, and a dozen pieces of ivory. All of us were surprised by the unusual sizes of the artifacts.

The semicircular bronze object kept us guessing what it was while we worked to uncover it all. It seemed like the back of a chair, but the Shang (1600-1046 B.C.) and Zhou (1046-256 B.C.) dynasties were not known to have chairs. We continued cleaning the mud and uncovered an aquiline nose and two protruding eye pupils like those of a crab. What was this artifact?

On August 27, the item was completely unearthed, and it turned out to be a huge bronze mask. The “back” was the silhouette of the mask, on which both pupils protruded out from the eye sockets 16 centimeters. Our best guess was that it is a depiction of Cancong, the semi-legendary first king of Shu.

Compared to the No.1 pit, the remaining objects in the No.2 pit were more diverse, so we divided them into three levels. The upper level had more than 60 elephant tusks. The middle level was primarily bronze wares, and the lower level had small pieces of bronze, jade, masks, eyes of sculptures, and seashell. The designs of the bronze standing man, bronze sacred tree, and bronze vertical-eyed mask unearthed from the No.2 sacrificial pit were unprecedented and among the world’s most amazing prehistoric relics so far.

The author is deputy director of the Sichuan Provincial Cultural Relics and Archaeology Research Institute and a leading archaeologist who participated in the excavation of the Sanxingdui Ruins in the 1980s.