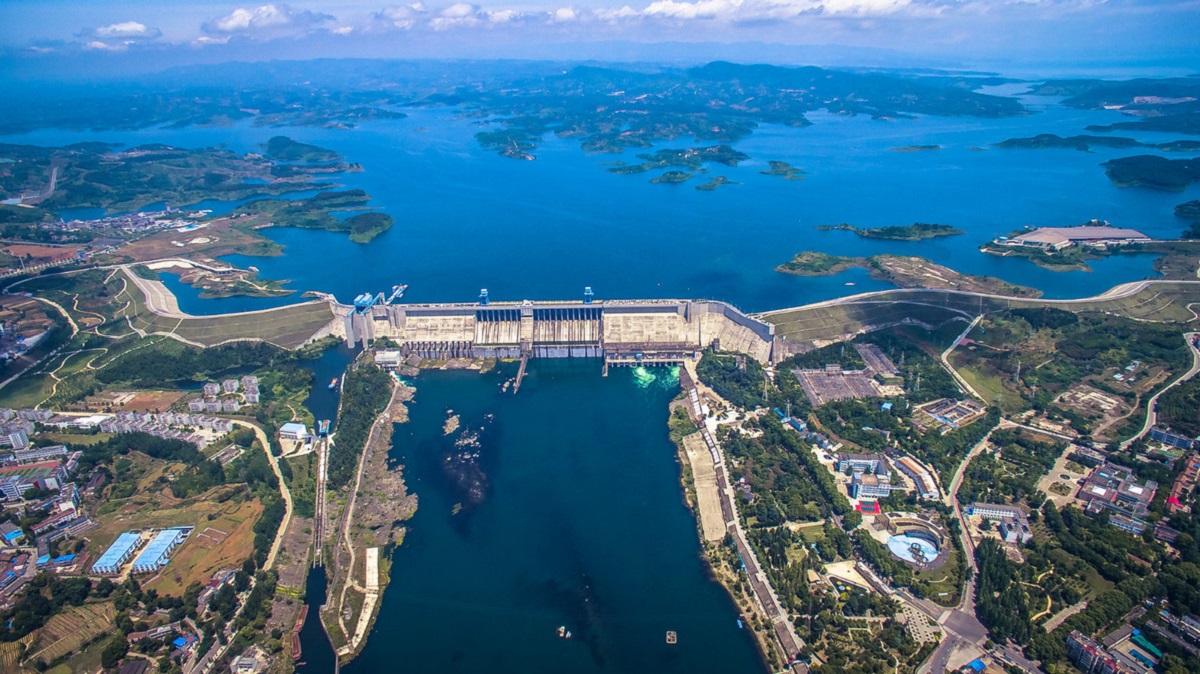 An aerial view of Danjiangkou Reservoir in Hubei province. The reservoir is the start of the middle route of the South-North Water Diversion Project. [Photo provided to China.org.cn]

Danjiangkou Reservoir, which is located on Hanjiang River and a major tributary of the Yangtze River, serves as the source of the central route of the South-to-North Water Diversion Project. Every small drop of water here carries a huge responsibility to supply the Chinese capital city Beijing.

The remarkable South-to-North Water Diversion Project is the fruit of 12 years of hard work. By December 2019, the project had channeled nearly 30 billion cubic meters of water, which was equivalent to the water reserve of 2,140 Hangzhou West Lakes. The project has become a lifeline of water supply to over 120 million people, and it has been the main source of water supply in multiple cities.

The South-to-North Water Diversion Project carries even more meaning than supplying water to China's arid northern regions. It demonstrations the power of the national unity. At the southern end of the central route, "send clear water of the Yangtze River to Beiing and Tianjin" once was a household slogan when the project broke ground. In Xichuan county alone, 100,000 people joined hands, carrying poles and baskets and rowing small wooden boats to move clay and sand that were used to intercept the Hanjiang River. Through unrelenting efforts, they built the largest man-made lake in Asia, Danjiangkou Resevoir.

Five years have passed since the South-to-North Water Diversion Project was put into operations, water supplied by Danjiangkou Reservoir and the trunk line of the central route has stayed above Class II quality standard, and that of the eastern route has been stabilizing above Class III quality standard. This is mainly attributed to the measures to control pollution along the routes. Specifically, 426 pollution control projects covering five aspects have been carried out along the eastern route, including urban wastewater treatment, integrated river basin treatment, and wastewater interception and diversion. Over 500 polluting companies in eight cities along the upper stream of the Danjiangkou Reservoir were closed, and an ecological isolation zone has been set up in the water source conservation area. In the city of Nanyang, Henan province, 433 wastewater outfalls into the river were blocked, and more than 50,000 fishing cages were removed.

The project has also created a sound ecological environment in the water source areas to ensure that every drop of water is clean. In the catchment area in Nanyang, 26 wastewater treatment plants and 26 garbage disposal plants have been built with the support from Beijing. The city of Shiyan, Hubei province, is a core water source area. It invested 1.56 billion yuan (US$225 million) in ecological restoration, and completed 45 river treatment projects and 2 million acre of forest plantation in three years, which raised the city's forest coverage rate to 64.72%. In addition, water source areas have adjusted agricultural structure with intensified efforts on developing agro-eco-economic agriculture, building a strong momentum for high-quality development.

The South-to-North Water Diversion Project is of great significance both now and into the future. Throughout the history of trans-basin water diversion projects, the South-to-North Water Diversion Project broke the nation's and even the world's records in construction scale, distance of water diversion, beneficiary population, effort in resettlement, and the complexity of engineering. After five years of operation, the project has proved that concerted efforts and national cohesion can lead to the success of big and key projects, and it is a true testimony to China's new idea of development.