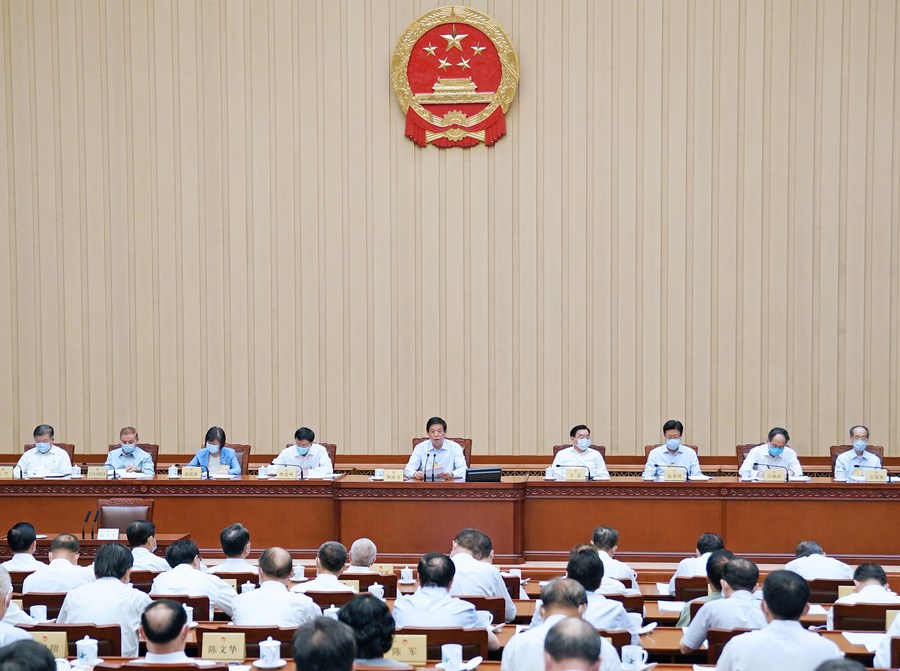 -- China's top legislature resolved the "vacancy" concern of the HKSAR LegCo by adopting a decision for the current LegCo to continue performing duties.

-- After Sept. 30, the sixth LegCo will continue performing duties for no less than a year until the seventh LegCo starts its four-year term.

-- HKSAR Chief Executive Carrie Lam said the decision demonstrates once again the care and support of the central government for the HKSAR.

The decision was passed at the 21st session of the Standing Committee of the 13th National People's Congress (NPC), China's top legislature.

The decision came as Hong Kong is endeavoring to contain a fresh COVID-19 outbreak since July. Hong Kong's health authorities reported 33 new COVID-19 cases on Tuesday, including 15 infections with unknown sources, bringing the total number of confirmed cases in the city to 4,181.

HKSAR Chief Executive Carrie Lam announced in late July to postpone the election of the seventh-term LegCo, which was originally scheduled for Sept. 6, 2020, for one year due to the epidemic.

The State Council on Saturday presented a bill to Chinese lawmakers asking the NPC Standing Committee to make a decision for the sixth LegCo to continue operation.

Explaining the bill at the legislative session, Xia Baolong, head of the Hong Kong and Macao Affairs Office of the State Council, said matters concerning the vacancy of the LegCo can only be resolved by the NPC Standing Committee at the constitutional level, as the HKSAR Chief Executive only has the power to postpone the election under the applicable law in the HKSAR.

The NPC Standing Committee has the power and duty to properly address constitutional issues arising from the implementation of the HKSAR Basic Law, according to Xia.

In a statement supporting the NPC Standing Committee decision, the Hong Kong and Macao Affairs Office applauded the decision as "important" and "timely," and pledged to cooperate with relevant authorities in implementing the decision.

In a separate statement, the Liaison Office of the Central People's Government in the HKSAR said the decision is in line with the Constitution and the HKSAR Basic Law and has unchallengeable legal authority.

It will minimize social instability and enable the society to focus on the most pressing task of curbing the COVID-19 epidemic, said the liaison office.

Carrie Lam also expressed her gratitude to the NPC Standing Committee decision, saying it resolved the problem of a lacuna in the local legislature.

The decision also demonstrates once again the care and support of the central government for the HKSAR, Lam said.

The HKSAR government will publish in the gazette the decision and work to enable the sixth LegCo to resume operation, she said.

In a meeting with LegCo President Andrew Leung, Lam exchanged views with Leung on the resumption of operation of the LegCo.

Lam said the current epidemic situation in Hong Kong remains severe and various sectors have been hit hard. "I hope that under the continued leadership of Leung, LegCo members can set aside their differences and disputes, and rebuild mutual trust for the well-being of the Hong Kong residents," she said.

Chan Man-ki, founding president of the Small and Medium Law Firms Association of Hong Kong, said she fully supports the decision of the NPC Standing Committee as it gives top priority to the life and health of Hong Kong residents.