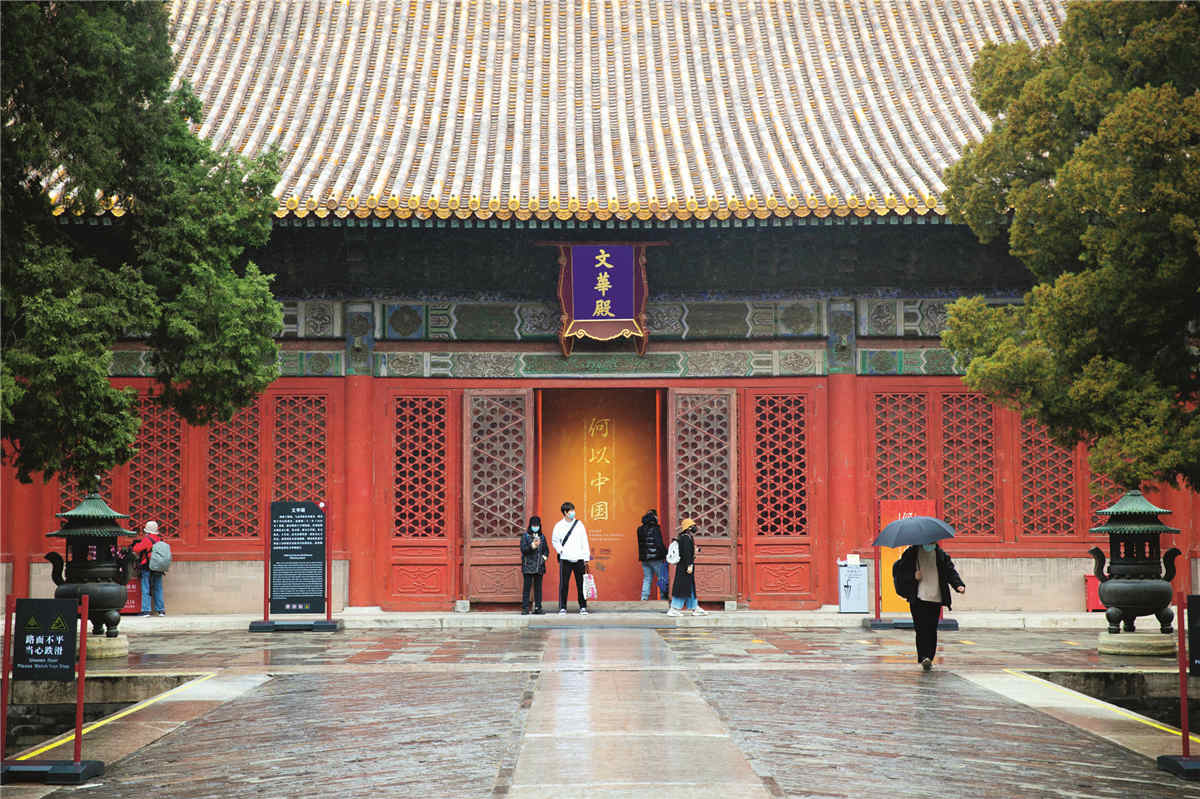 March 29, 2022: In spite of the rain, art and history lovers come to admire the exhibition “The Making of Zhongguo: Origins, Developments and Achievements of Chinese Civilization” at the Palace Museum in Beijing, capital of China. by Ma Yue/China Pictorial

Why does China look like it does today after five thousand years of history? The exhibition “The Making of Zhongguo: Origins, Developments and Achievements of Chinese Civilization” held at the Hall of Literary Brilliance in the Palace Museum is offering visitors a glimpse at the answers to this mystery. It features over 130 pieces (or sets) of precious cultural relics from the Neolithic Age all the way through the Qing Dynasty (1644-1911), including artifacts and works of art fashioned from stone, pottery, jade, bronze, gold, and silver as well as calligraphy, paintings, rare documents, and seals. Featured national treasures include He Zun (wine vessel), Changxin Palace Lantern, and the Tibetan version of Four Medical Tantras.

This exhibition presents the long history and cryptic profundity of Chinese civilization as a great flowing river to interpret its origin, propagation, and development with three sections: “Sources,” “Streams,” and “Confluence.” The exhibition demonstrates how Chinese civilization has prospered with inclusive cultural qualities and explains the overall course of development of Chinese history as well as the significant contributions China has made to human civilization.

The first section, “Sources,” opens with an exposition of China’s geography and evidence on the birth of Chinese civilization with unique cultural heritage, philosophical schools, values, systems, and multiple ethnic groups.

One of the most eye-catching artifacts in this section is the Changxin Palace Lantern dating back to the Han Dynasty. The ingenious design ideally combined aesthetics and eco-friendly philosophy. It features a gilt bronze figurine of a maid on her knees holding a lantern with her hanging right sleeve serving as the lantern cover. When the lantern is lit, the exhaust flows directly into the hollow body of the maid through her right sleeve to function as a chimney or vent. Inspired by the lantern, the flame lantern for the Beijing 2022 Winter Olympics was designed to carry the bright hope of mankind.

A wine vessel known as He Zun is among the most recognized cultural relics in the first section. The bronze ware, made by a noble with the surname “He” during the Western Zhou Dynasty (1046-771 B.C.), was used to pay tribute to ancestors at sacrificial ceremonies. The decorations on the artifact feature mythical beasts that were able to communicate between heaven and earth according to legend. The 122-word inscription on its base describes the establishment of the new capital Luoyi (today’s Luoyang) five years after King Cheng of Zhou assumed the throne, making it an important evidentiary piece to study the history of this dynasty. It is equivalent to the archives of the Western Zhou Dynasty and its bronze ware history. Moreover, this piece is the earliest surviving instance of the phrase “Zhongguo” (literally “Middle Kingdom”), which now means “China” in Chinese.

The second section, “Streams,” presents the glorious history of fusion of regional cultures and ethnic distinctiveness into unified and mutually appreciative Chinese national identity, human destiny, and global life. Cultural exchange between Eastern and Western civilizations has a long history. Starting from the Han Dynasty (202 B.C.-220 A.D.) , smooth flow of trade over land and sea nurtured China with frequent and close exchanges with other countries during which time the country absorbed the brilliant achievements of various civilizations and gained opportunities and inspirations for development and innovation.

A pottery vase displayed at the exhibition testifies to cultural exchange along the Maritime Silk Road linking the East and the West. The pottery vase, shaped like an upright olive, is notable for its turquoise glaze on its surface. The mix of the shape, glaze and patterns of the vase, according to research, are iconic of the ancient Persian area, but it was found on the other end of the Maritime Silk Road.

The third section, “Confluence,” demonstrates how Chinese civilization has been created and enjoyed by the people. The Chinese concept of benevolence and the wisdom gained from the achievements of China’s excellent traditional culture have contributed to progress of human civilization.

On the north side of the Hall of Literary Brilliance is the Belvedere of Literary Profundity, where visitors can enjoy a complete reproduction of The Complete Library of the Four Treasuries, a priceless set preserved within the Hall of Literary Brilliance. Built in 1776, the 41st year () of Emperor Qianlong’s reign (1736-1795) in the Qing Dynasty, the Belvedere of Literary Profundity was the largest imperial library in the Qing palace and the long-time home of the first copy of The Complete Library of the Four Treasuries. The world’s largest encyclopedia at the time, the ambitious book series was edited and copied by more than 4,400 scholars and scribes from 1773 to 1782 under an imperial edict from Emperor Qianlong. It includes almost all important literary works from the Pre-Qin Period (2100-221 B.C.) through the Qing Dynasty, and serves as a searchable database for ancient classical studies.

“While managing the exhibition, we focused on the theme by exploring stories on the Chinese land to foster a panoramic view of the origins, developments, and achievements of Chinese civilization,” said Jin Ruiguo, deputy director of the Museum and Social Heritage Department under the State Administration of Cultural Heritage.

This exhibition also found inspiration from the innovative presentation of cultural relics on the television program The Nation’s Greatest Treasures Season 4. The popular show featured stories related to key relics presented through various arts like dance dramas, musicals, singing, and instrumental music. Many of the exhibits on display, which were borrowed and selected from museums nationwide, have already become household names thanks to the acclaimed television program.