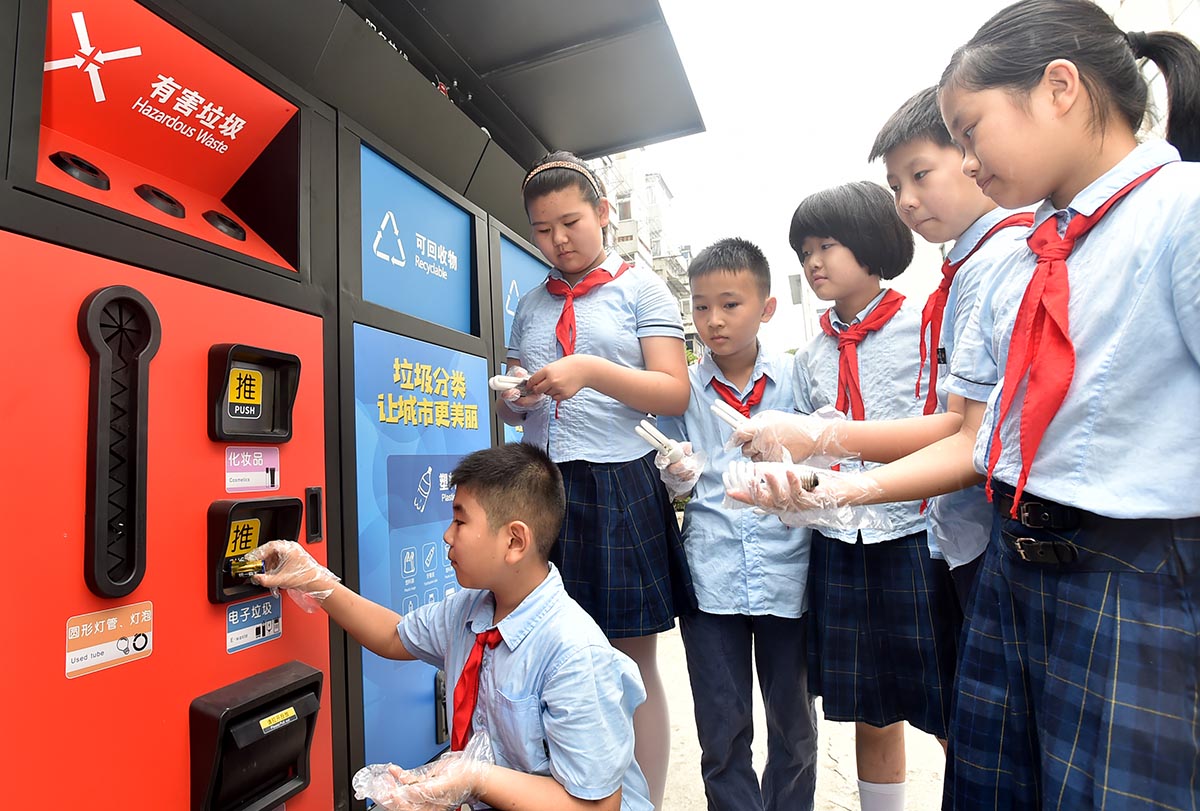 September 1, 2020: Students of the Wenhe primary school sort the waste batteries and bulbs according to local standards in Yangzhou City, Jiangsu Province. Waste sorting had covered nearly 95 percent of residential communities in 46 pilot cities across China by the end of 2020, according to a report on the enforcement of the Law on the Prevention and Control of Environmental Pollution by Solid Waste. VCG

Civilizational Transformation for Biodiversity Conservation
Scan with wechat to share

Conservation of biological diversity is not just about making concessions for the environment; it requires a civilizational transformation in values, lifestyles, and social norms.

The shift from accepting environmental damage and its implications for the sake of improving living standards to seeking comparable living within ecological limits creates a very different conceptual frame for understanding conservation and sustainable use of biological diversity. Discussions are needed to specify what societal values and priorities can be set and clarify if market pricing mechanisms should play the lead role in determining what is to be valued, produced, and consumed.

The Food and Agriculture Organization of the United Nations estimated that approximately one-third of all food produced for human consumption in the world is lost or wasted. While it is difficult to estimate the impact on biodiversity at a global level, food waste unnecessarily compounds the negative externalities that mono-cropping and agricultural expansion into wild areas create on biodiversity loss. Loss of land, water, and biodiversity as well as the negative impacts of climate change represent huge costs to society that are yet to be calculated.

The Natural Resources Defense Council analyzed hard data from three major U.S. cities―Denver, New York, and Nashville, to shine light on the issue of food waste. Apples, bread, oranges, and potatoes topped the list of wasted food, alongside discarded dairy products; 44 percent of participants said they frequently discarded uneaten food, 20 percent reported moldy or spoiled food, and 11 percent indicated they ended up tossing out leftovers. In New York City, the study found that participating in a compost program led to more overall waste compared with families whose garbage goes into a single stream. To counter that trend, the report’s authors recommended reminding consumers that “preventing food waste is preferable to composting it.”

China launched a comprehensive “Clean Your Plate” campaign in recent years to reduce food waste when eating out. Restaurants and dining halls display anti-food-waste posters and banners, and the media has aired content promoting frugality. Local governments have introduced a series of measures to curb food waste alongside efforts to promote waste sorting. In India, each person eats only five kilograms of meat a year on average while a person in the European Union consumes more than 60 kilograms. Even with highly productive European agricultural methods, it takes an estimated 3.2 square feet of farmland to produce 2.2 pounds of vegetables, but 78.5 square feet for chicken, 95.8 square feet for pork, and 225 square feet for beef.

Different civilizational values make middle-class consumption in developing countries far less wasteful during the first phase of urbanization than it has been elsewhere.

Five shifts in multilateral frameworks are needed for a civilizational, rather than purely market-based, approach to biodiversity conservation.

Second, international trade and disconnection between areas of biological diversity and areas of product consumption that cause biodiversity loss make it difficult to understand, monitor, and prevent ecosystem loss.

Third, the idea of collective commitments flows from the flawed notion of collective transformation of the earth system. It ignores wasteful usage of natural resources in certain areas and then shapes models assuming global convergence of resources typical for Western civilization. The trajectory of material usage and growth shows that Asian and African civilizations are not following the trends of Western civilization, which single-handedly caused the global problem through excessive usage.

Fourth, the societal transformation that led Western civilization to venture away from European socioeconomic conditions to scour the world for raw materials and energy sources defined progress as material abundance. This worldview is obviously not applicable to developing countries which have prospered while living within ecological limits.

Fifth, the new urban dwellers caused by urbanization increase material usage, which is far higher than that of manufacturing and rural populations. The urban middle class is both the cause and solution to the global problem of living within ecological limits.