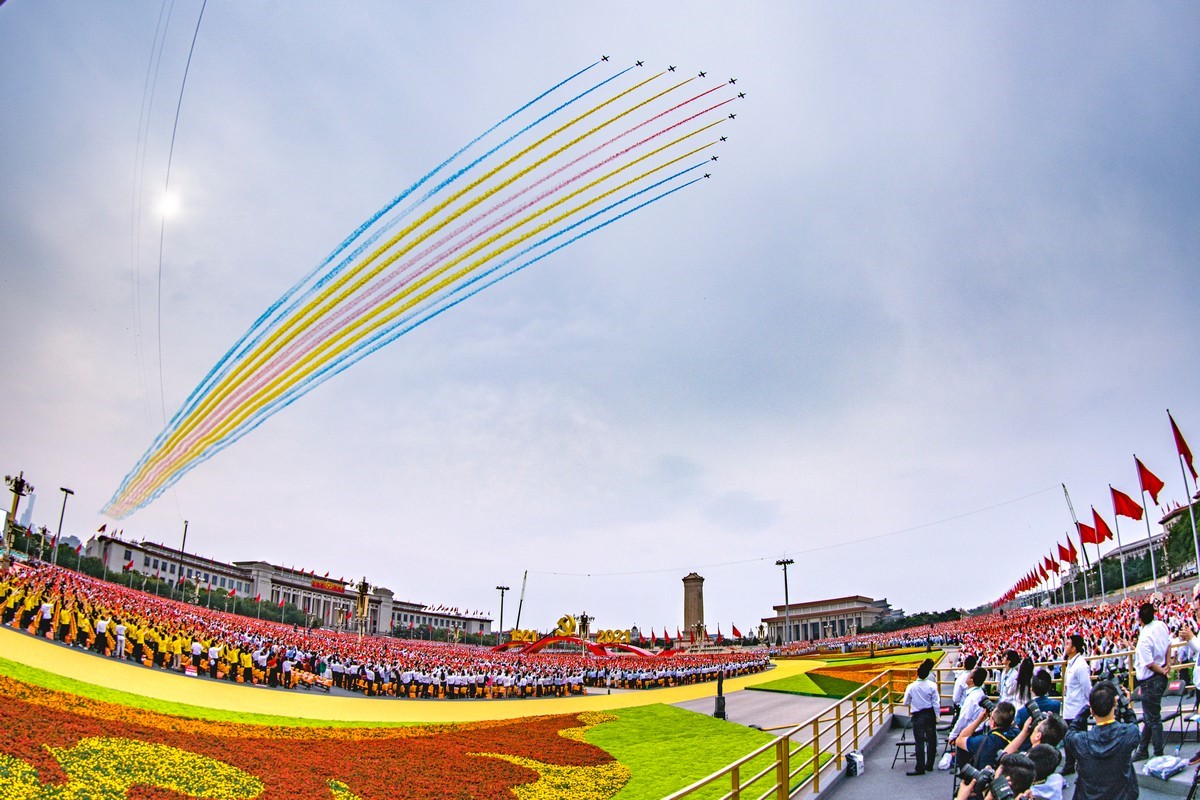 Military aircraft fly in echelon ahead of a grand gathering celebrating the Communist Party of China (CPC) centenary in Beijing, capital of China, July 1, 2021. China Pictorial

CPC’s Centenary: From Flashbacks to Future Prospects
Scan with wechat to share

July 1, 2021 marks the 100th anniversary of the founding of the Communist Party of China (CPC). Chinese President Xi Jinping, also general secretary of the CPC Central Committee and chairman of the Central Military Commission, delivered a powerful speech in Beijing highlighting the 100 years of struggle and outlining the second centenary goal of building China into a great modern socialist country in all respects.

Xi listed the CPC’s great successes over the past 100 years: uniting the Chinese people to fight bloody battles, building a stronger China through self-reliance, achieving great success in reform, opening up, and socialist modernization, and “pursuing a great struggle, a great project, a great cause, and a great dream through a spirit of self-confidence, self-reliance, and innovation.”

His speech inspired flashback images to run through my mind.

Like many China watchers, my love affair with China started in the 1970s when printed copies of China Pictorial could be found in the living room of every educated or literary Pakistani family. The magazine presented vivid and pretty pictures of life in China. At that time, however, very few color photos were available in Pakistan, and both countries faced poverty.

Over the decades, things have been changing drastically. China, now the world’s second-largest economy, is quickly closing the gap with the U.S.  After eliminating absolute poverty, China has been the leading contributor to global growth. The rest of the world is fully cognizant of this fact. China has become the poster child for emerging markets and developing countries, consolidating its national strength with increasing global influence.

When China organized the first Belt and Road Forum for International Cooperation in Beijing in May 2017, 29 heads of state or government joined delegates including officials, entrepreneurs, financiers, and journalists from more than 130 countries and regions to attend. I was one of the delegates.

It was my first visit to China after closely observing the country for decades. President Xi’s emphasis on peace before prosperity in his speech at the forum particularly impressed me. Aware that the world was tormented by conflict and terrorism threatening peace, Xi put great emphasis on fostering peace.

It also struck me when President Xi talked extensively about how the ancient Silk Road connected China with civilizations in Asia, Europe, and Africa. Through the Belt and Road Initiative, China is driving the world toward a better future by improving infrastructure and connectivity. Xi also made it clear that projects under the Belt and Road Initiative must be based on partnerships with mutual trust and respect.

China’s trade of goods with other countries participating in the Belt and Road Initiative reached US$1.35 trillion in 2020, up 0.7 percent year-on-year, accounting for 29.1 percent of its total foreign trade. China’s total trade in goods with other Belt and Road countries topped US$7.8 trillion from 2013 to 2019, with more than US$110 billion in non-financial overseas direct investment.

The second Belt and Road Forum in 2019 consolidated China’s position as a beacon of multilateralism and free trade. In the two years since then, the Belt and Road Initiative has made even more remarkable achievements.

In his speech to mark the 100th anniversary of the founding of the CPC, President Xi clearly stated that China would remain committed to promoting peace, development, cooperation, and mutual benefits while embracing an independent foreign policy of peace and blazing paths to peaceful development. “We will work to build a new type of international relations and a human community with a shared future, promote high-quality development of the Belt and Road Initiative through joint efforts, and use China’s new achievements in development to provide the world with new opportunities.”

Such words assured me that the world will soon become a better place to live.

The author is an award-winning Pakistani journalist who has written about many significant China-Pakistan issues.