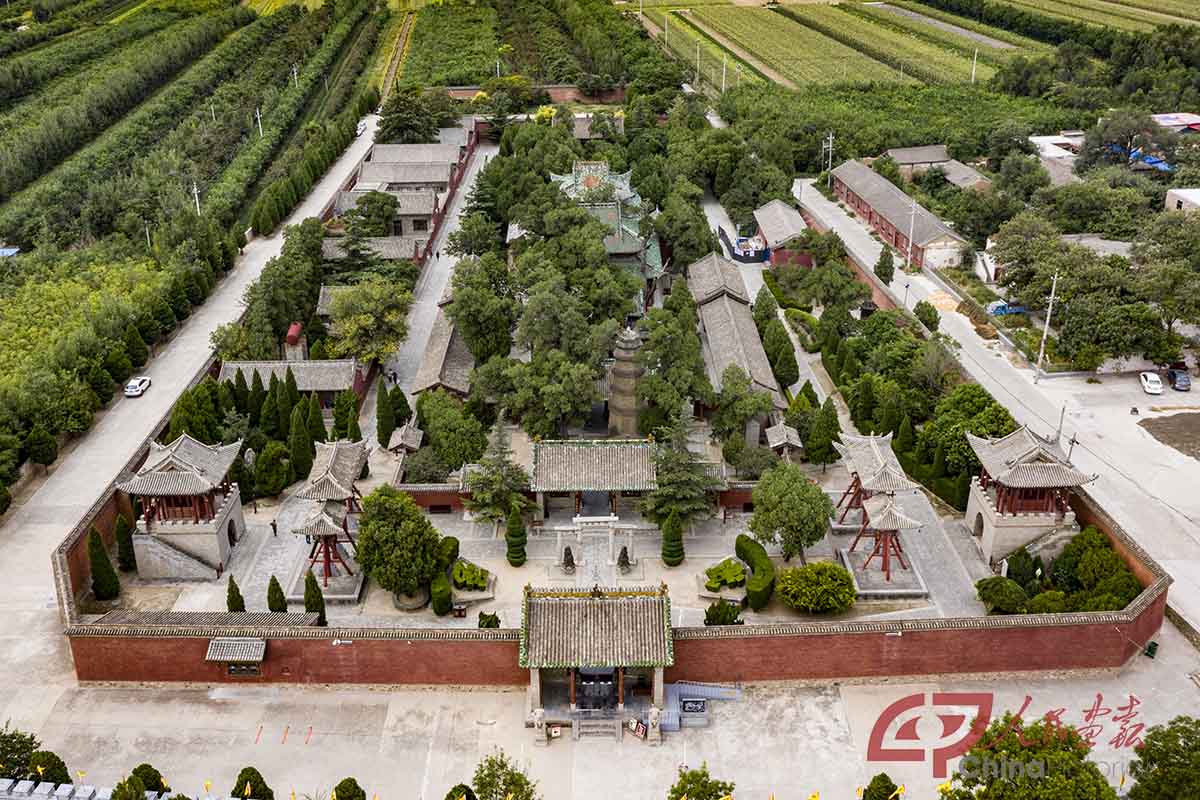 An aerial view of the Ancestral Temple of Guan Yu. Located in Yuncheng’s Changping Village, the temple was built on Guan’s residence and has been renovated many times throughout history. The 15,000-square-meter building complex features a symmetrical design and layout, just like the Memorial Temple of Lord Guan. by Chen Jian/China Pictorial

Cultural Legacy of Lord Guan
Scan with wechat to share

The Yuncheng North Railway Station in Yuncheng City, northern China’s Shanxi Province, is situated near the center of China’s high-speed railway network comprised of “eight vertical and eight horizontal” lines. It takes six hours to get there from Beijing. Upon exiting the train station, passengers will be greeted by a gigantic bronze statue of Guan Yu, also referred to as Lord Guan, a general in the Three Kingdoms period (220-280). With a majestic face, the general is clothed in a battle robe and wields his legendary weapon, the “Green Dragon Crescent Blade,” in his right hand while stroking his long, lush beard with the left hand. This statue of Guan Yu has become the city’s “calling card.” Four Chinese characters carved in the base of the statue declares the place as the hometown of Lord Guan and notifies arriving travelers that more of the general’s influence can be found in Yuncheng.

This statue evokes emotions about Guan Yu’s reputed loyalty and bravery. The Chinese classical novel Romance of the Three Kingdoms vividly depicts stories of the famous general and is still widely read.

Guan Yu was born in 160 in what is now the village of Changping in Haizhou Town, Yuncheng City. According to folk stories, a salt merchant named Lu Xiong from Haizhou cut off most of the salt transportation channels to monopolize the local salt trade, and then bullied the locals and raped women.
When 19-year-old Guan Yu learned of the situation, he broke into Lu’s mansion at night and killed the local despot with his knife. He had to flee the area to evade arrest.

To honor Guan and show gratitude to what he did for the village, locals continued to visit Guan’s home to trim the plants, burn incense, and promote his virtues. Later, the residence was rebuilt into an ancestral temple honoring Guan Yu.

Inside the temple are also halls to worship Guan Yu’s wife, two sons and ancestors, respectively. On both sides of the Holy Ancestors Hall in the temple are statues of Guan Yu’s great-grandparents, grandparents, and parents. The main statue in the center of the hall is said to be Guan Longpang, an ancestor of Guan Yu and a loyal minister who was killed by Xia Jie, the last ruler of the Xia Dynasty (2100-1600 B.C.), for correcting the Xia ruler’s misconduct. Tour guide Li Huirong said that Guan Yu inherited his ancestor’s passion for fighting injustice.

The Ancestral Temple of Guan Yu attracts pilgrims and descendants of the Guan clan from all over the world. According to incomplete statistics, more than 30,000 temples dedicated to Guan Yu have been built in over 30 countries and regions around the world, including more than 1,000 in Japan and Malaysia. Cultural organizations related to Lord Guan in those regions are also very active.

“Foreign tourists are mostly from Southeast Asian countries, and most domestic tourists are from Fujian, Taiwan, and Hong Kong,” noted Li Huirong. “Some pious pilgrims even carry life-size statues of Guan Yu here all the way from their home villages. Most visitors stay here for two or three days and depart after attending the religious consecration ritual.”

The Memorial Temple of Lord Guan is even more magnificent and covers a land area of 220,000 square meters, equivalent to 30 standard football fields, making it 10 times larger in scale than the Ancestral Temple of Guan Yu.

The Memorial Temple of Lord Guan was first built in the Sui Dynasty (581-618). The temple was subsequently expanded and repaired as Guan’s deification unfolded through honor by increasingly lofty posthumous titles.

Guan Yu was granted the posthumous title of “Marquis Zhuangmou” in the Three Kingdoms period. During the Song Dynasty (960-1279), he was posthumously titled “Duke Zhonghui” and later dubbed a prince. In the Ming Dynasty (1368-1644), Emperor Wanli bestowed Guan Yu the title “Holy Lord Guan, the Great God Who Subdues Demons in the Three Worlds and Whose Awe Spreads Far and Moves Heaven.” The Qing Dynasty (1644-1911) even promoted the worship of Guan Yu among Mongol tribes, an effort that left him one of the most revered religious figures in the country. Consequently, most of the existing temple buildings are relics from the Qing Dynasty.

On the central axis of the Memorial Temple of Lord Guan are the Duanmen Gate, Zhimen Gate, Meridian Gate, Yushu Tower, Chongning Hall, and Chunqiu Tower. Various wooden and stone memorial archways, pavilions, corridors, and towering pine and cypress trees accent the main buildings, which were built in a magnificent royal scale.

Some major halls in the temple feature plaques with calligraphic works inscribed by emperors Kangxi, Qianlong, and Xianfeng and Empress Dowager Cixi of the Qing Dynasty.

Today, the temple offers a wealth of calligraphic works. More than 220 pieces of calligraphy, poetry, and couplets hang on the walls in the eastern and western corridors. Creators include workers, farmers, businessmen, veterans, and students.

To mark the 1,860th anniversary of Guan Yu’s birth, the local government hopes to better inherit and promote the loyal and righteous spirit of Guan Yu by organizing the calligraphy exhibition.

For tour guide Li Huirong, the busiest times of the year come during the National Day holiday and the birth anniversary of Guan Yu, the 24th day of the sixth month on the Chinese lunar calendar, or the 13th day of the fifth lunar month as believed by people in some regions of southern China.

During peak seasons, the Ancestral Temple of Guan Yu receives as many as 5,000 visitors in a single day, and the Memorial Temple of Lord Guan can even welcome as many as 10,000 visitors. More than 30 tour guides now work in the scenic area, and during peak seasons, each leads more than 10 tours per day.
Both temples are decorated with many red wooden blessing plaques densely tied to shelves with red strings. Each is only half the size of a palm, and the red is set off by beautiful golden patterns. Visitors can write their names and wishes on a plaque to pray for health, safety, marriage, reunion, career, wealth, or disaster relief.

According to Li, Lord Guan is regarded by many as an omnipotent deity of Chinese folk religion, as well as a symbol of loyalty, righteousness, benevolence, and courage.

Notice boards around the Lord Guan Temple Scenic Area provide information and interpretation of the contemporary influence of Guan Yu culture. Guan Yu is known for his loyalty to the nation. His righteousness is considered to be of the highest morality. His legacy is one of helping the poor and punishing oppressors, embodying great love and a fraternal spirit. The essence of his courage is an inspiration to work hard, innovate, and fight for the future.

At 9 a.m. on September 19, 2020, golden sunlight started warming up the square in front of the Memorial Temple of Lord Guan. About 150 people had gathered for a wrestling competition. Participants included students from local sports schools and athletes from Taiyuan, Linfen, Xinzhou, and other cities. All were awaiting the opening of the wrestling event named after “Wu Sheng” (meaning the “Saint of War,” another nickname of Guan Yu).

The competition was carried out in a traditional Chinese fashion with simple, straightforward rules. The first to push the opponent out of a circle or make any part of his body other than the feet touch the ground would win. Winning a match required besting one’s opponent in two out of three rounds. Chinese-style wrestling requires a flexible use of basic wrestling techniques and the ability to turn an opponent’s strength against himself.

Competitor Feng Zhexi said that the wrestling may seem simple but is quite difficult to master. Feng was a student at a sports school in Yongji City, Shanxi Province, and this was his first chance to participate in a Chinese wrestling competition. He looked lean under a pair of black narrow-rimmed glasses. While waiting around, he carefully studied the unfolding competition.

He chose to pursue wrestling because the sport fascinated him. “Rather than with brute force, you need to win a wrestling match with wisdom,” he explained. “You have to analyze the strengths and weaknesses of yourself and your opponent and devise a way to deliver the best possible attack with your hands and feet.”
Throughout the morning, more than 100 wrestlers competed. For each match, the two athletes put on special tops and belts, one blue and the other red. At the beginning and the end, both were required to bow to each other regardless of how fiercely they fought.

As the competition wound down with more and more sweaty faces exiting the ring, winners of various divisions were announced. The runner-up of the Junior Lightweight Division was only 13 years old, the youngest wrestler to participate in the event this year.

An organizer revealed that Yuncheng had hosted the “Wu Sheng Cup” wrestling competition for 10 straight years, attracting participation from nearly 3,000 athletes. The event has inspired interest in the sport among more and more juveniles.

The wrestling competition is now considered an important part of the Lord Guan Cultural and Travel Festival in Yuncheng. To mark the opening of the festival, bus stations all over the city were decorated with posters featuring modern design elements related to Lord Guan.

In Yuncheng, you will see a statue of Guan Yu in almost every restaurant and shop. The statues may differ in shape and size, but they quietly unify Yuncheng people through a shared sense of respect and hope.