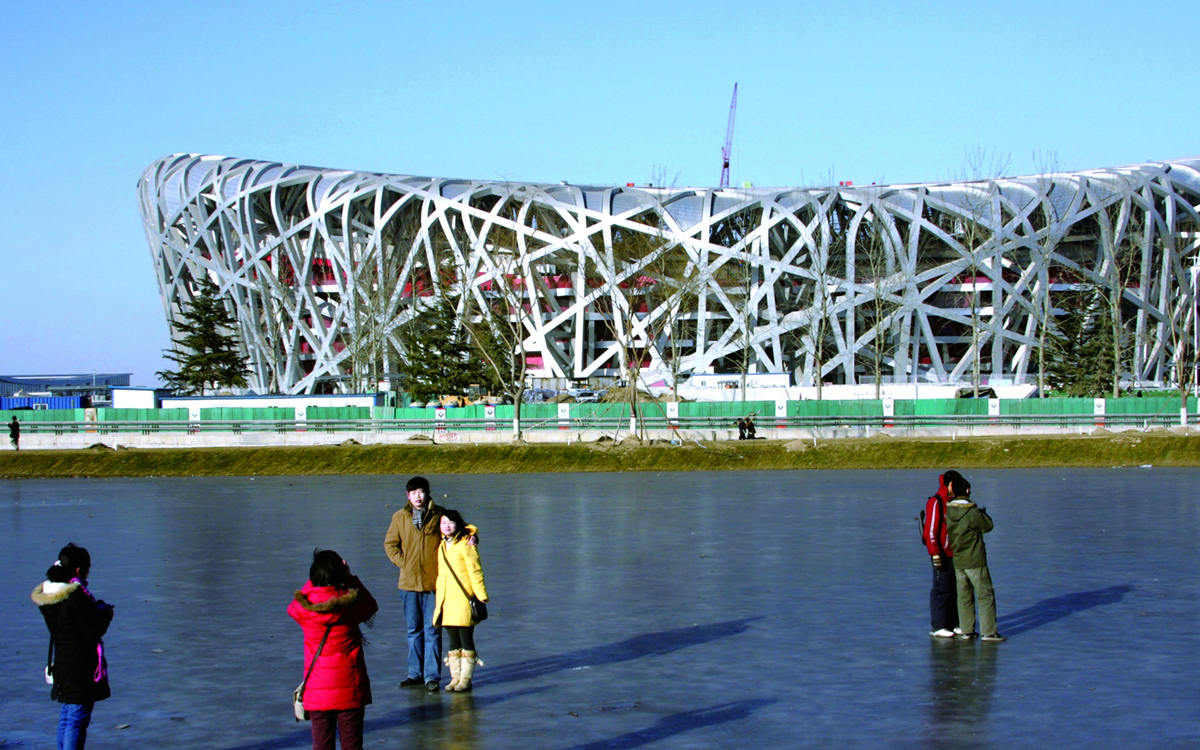 The National Stadium (also known as Bird’s Nest), the main stadium of the 2008 Beijing Olympics, will witness both the opening and closing ceremonies of the upcoming 2022 Beijing Winter Olympics and Paralympics. It will become the one and only stadium that hosts the opening and closing ceremonies of both the Summer and Winter Olympics. by Wu Changqing

Since 1840, modern Chinese sports buildings have developed with unique vitality featuring an integration of both western sports facilities and traditional Chinese structures.

In 1915, the government of Republic of China (1912-1949) enacted an order covering nationwide construction of stadiums. Sports buildings from this period transcended traditional Chinese wooden building framework through inspiration from Western accommodation of sports such as track and field, swimming, and gymnastics. Construction standards have also gradually improved.

The development of modern sports and more regular sporting events have also promoted construction of facilities. The Shanghai Stadium built in 1935 still has a global reputation. Covering 20-odd hectares, it was designed by the famous Chinese architect Dong Dayou (1899-1973), who incorporated classical Chinese building elements into the modern stadium. Multi-functional playgrounds, gymnasiums, and swimming pools were all included to meet the most advanced benchmarks of the West in those days, and it earned global fame as “the greatest stadium in the Far East.”

The founding of the People’s Republic of China in 1949 marked a major watershed in the development of Chinese sports architecture when many venues were planned to open to the public. Specifically, the government started refurbishing existing facilities while building many new stadiums in a systematic and planned fashion. Scientific research on sports buildings was gradually conducted to explore technical issues of sightlines, structural integrity, and evacuation routes, among myriad other topics, producing a model of sports construction that has still influenced new venues to this day.

In the 1960s and 1970s, China made fruitful explorations of highlighting sports buildings’ characters, architectural layout, structural forms, and installed equipment with experience borrowed from abroad. Most large-scale sports buildings back then sit in the central areas of key cities according to common trends of spatial layout. Many specialized venues like shooting ranges and bicycle tracks also emerged, contributing to more diverse sports buildings in China. Sports activities that do poorly with weather such as basketball, table tennis, and wrestling could go indoors.

Since the 1980s, thanks to China’s economic progress, the country gradually has more funding and technical competence to boost sports development, and the overall area and number of ​​sports buildings have increased accordingly. It should be noted that sports buildings during the period broke through fixed models with more complex and diverse functional structures and shapes. Several high-standard sports centers and venues were built for the purpose of organizing a series of large-scale national events such as the National Games and the Asian Games. Representatives include the Shanghai Swimming Center and the Guangzhou Tianhe Sports Center.

China’s active participation in international sports events has also promoted the development of sports buildings. The 11th Beijing Asian Games in 1990 marked the debut of large-scale international sport event in China. A total of 25 new venues were built for the Asian Games, most designed by Chinese architects exploring a marriage of national elements with the modern ingredients. Among them, the National Olympic Sports Center won the Silver Award from the International Association for Sports and Leisure Facilities (IAKS), indicating international recognition of the design of China’s sports architecture. Since then, the hosting of the 2008 Beijing Olympics, the 2014 Nanjing Youth Olympics, and now the upcoming 2022 Beijing Winter Olympics, has brought an increasing number of unique Chinese sports buildings to global spotlight.