Exploring the Universe with“Eye of Heaven” 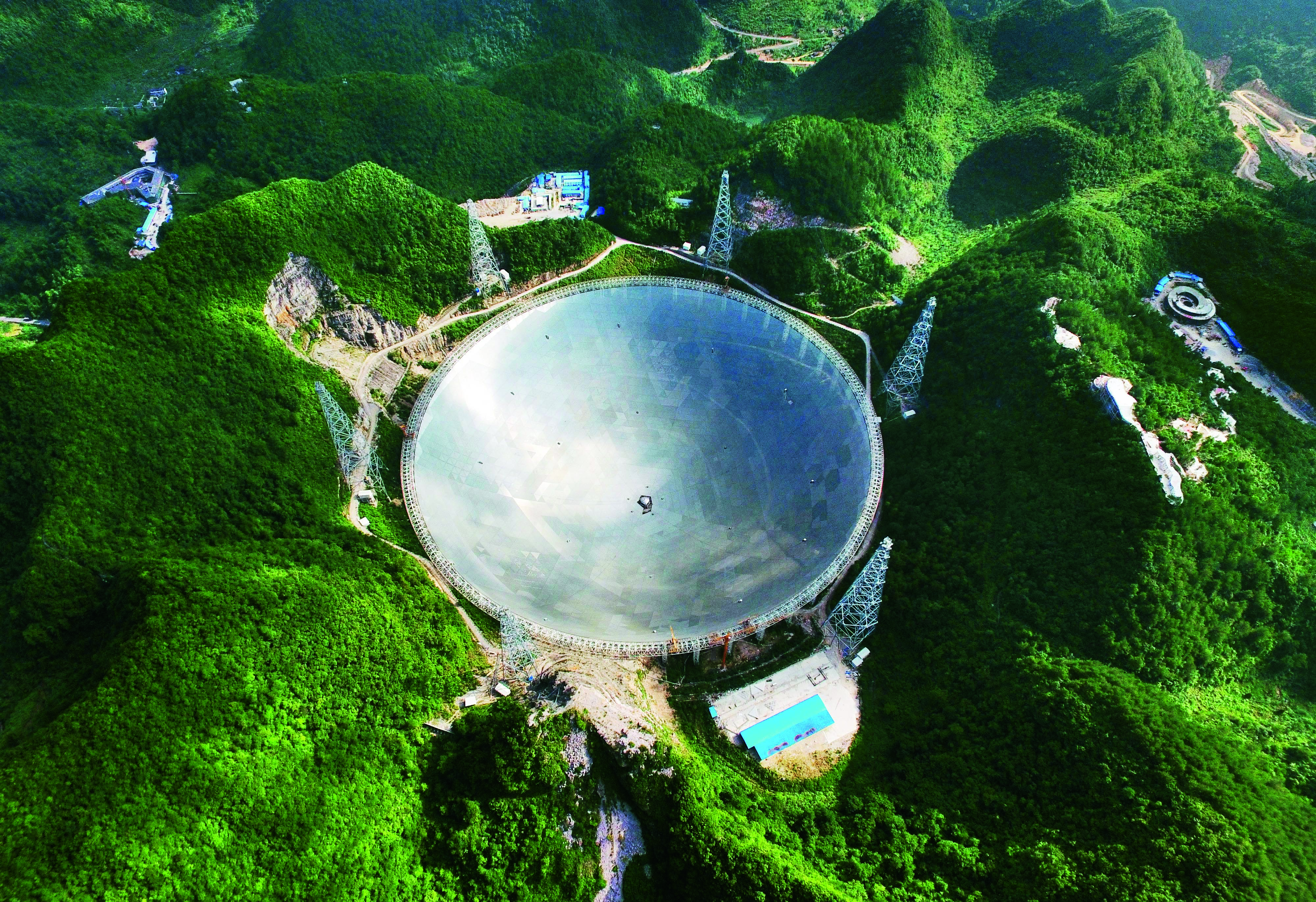 June 23, 2016: The central part of the FAST project is about to be completed. VCG

Humans have fantasized about extraterrestrial life since ancient times.

On September 25, 2016, in a karst valley in Qiannan Buyei and Miao Autonomous Prefecture in southwestern China’s Guizhou Province, the Five-hundred-meter Aperture Spherical Telescope (FAST) was officially launched to explore the secrets of outer space.

Ordinary astronomical telescopes are optical, which means they can only gather and focus visible light from other astronomical objects. However, many radio waves from astronomical radio sources are not visible to the human eye, but can be detected otherwise. The primary observational instrument of radio astronomy, a radio telescope is a specialized antenna and radio receiver used to capture radio waves.

Dubbed the “Eye of Heaven” in China, the nearly 1.2-billion-yuan (about US$180 million) FAST project took 22 years from preparatory research to completion, after it was proposed by Chinese astronomers in 1994. Constructed by the National Astronomical Observatories of China under the Chinese Academy of Sciences, the telescope’s main structure is as large as 30 football fields. FAST is the world’s largest and most sensitive radio telescope, and China holds the intellectual property rights to it.

FAST has reason to be proud. Upon completion, the telescope’s comprehensive properties dwarfed Puerto Rico’s Arecibo Observatory exponentially. It is 10 times more sensitive than the steerable 100-meter telescope near Bonn, Germany. Theoretically speaking, FAST can sense electromagnetic signals from 13.7 billion light years away, a distance close to the edge of the visible universe.

FAST also shoulders major scientific research missions. Its super sensitivity and detection ability of pulsars’ gravitational waves are conducive to space exploration, researching the origins of the universe and searching for signs of intelligent life. FAST’s major functions include seeking and researching pulsars and searching for alien life.

Many industry insiders believe that FAST would not exist without Nan Rendong.

Nan Rendong, chief scientist of the FAST project and a researcher with the National Astronomical Observatories of China, considers FAST his baby as well. From early preparations to completion, Nan was involved for all 22 years.

In April 1994, site surveying for the FAST project started. At that time, Nan and his colleagues began more than a decade of preparatory research. To find the most suitable place in the mountains of Guizhou to construct and install a 500-meter aperture spherical telescope, Nan visited more than 100 funnel-shaped naturally formed pits from 1994 to 2005. In those days, this was a monumental task because of poor road conditions. They returned to town at night and set out again the next day. Back then, many people in the mountainous areas knew Nan.

After the preliminary field investigation, many members of the team returned to their old jobs, but Nan continued traveling around China. To seek technological cooperation, he took a train from Harbin Institute of Technology in northeastern China to Tongji University in eastern China, and then to Xidian University in northwestern China. He also attended many international conferences and talked to everyone he met there about the FAST project. “I began to be very nice to everyone, hoping to get more global support for the project,” grins Nan.

FAST is now exploring the secrets of the universe. According to CNN reports, the massive engineering and scientific project is considered a major step in humanity’s quest to determine whether we are alone in the universe. The device has the potential to change our understanding of the universe and ideas about life on other planets.