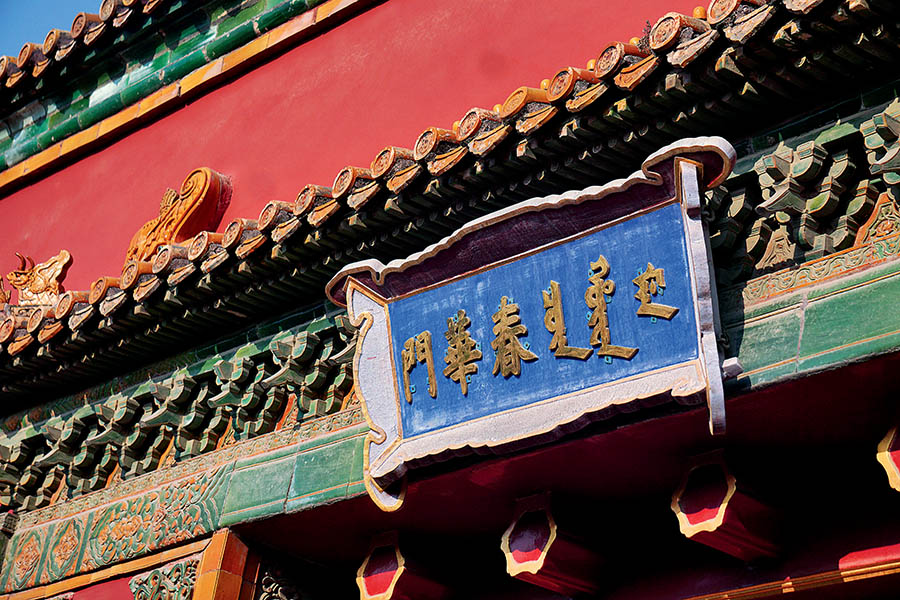 The Palace Museum (Forbidden City), an imperial palace of the Ming (1368-1644) and Qing (1644-1911) dynasties, is considered the pinnacle of Chinese palace architecture. One of the world’s largest and best-preserved wood architecture complexes, it attracts tens of thousands of visitors from China and around the world every day. Still, some corners of the complex remain unopened to the public and a relative mystery.

After many phone calls and negotiations, our reporter was finally granted access to one of the “forbidden zones” where a hidden Tibetan Buddhist world lay in wait.

In the northwestern quadrant of the museum is an area known as Zhongzhengdian, entirely composed of  Buddhist halls. Around Zhongzheng Hall are 10 Tibetan Buddhist halls including Baohua Hall, Yuhua Pavilion and Fanzong Tower, lined up from north to south. None of these buildings are open to the public.

In 1749 during the Qing Dynasty, Emperor Qianlong took the advice of the third Jangjya Khutuktu, then national preceptor, to mimic the designs of the Mandala Tower of the Toling Monastery in Tibet during a renovation of the Yuhua Pavilion, an esoteric Tibetan Buddhist hall.

Although it appears to have only three stories, Yuhua Pavilion actually has four floors and is the only structure in the imperial palace to combine Han and Tibetan flavors. The Buddha statues on the fourth floor represent four different levels of religious practice.

“The layout of the relics in the pavilion remains the same as it was from 1711 to 1820,” notes Luo Wenhua, director of the Institute of Tibetan Buddhist Heritage of the Palace Museum. The specific duration and the position of each article have been recorded in the museum’s files.”

Through the opened vermeil gate, warm winter sunshine radiates onto the rosewood Buddhist pagoda on the first floor of Yuhua Pavilion. Above the gate is a board with an inscription by Emperor Qianlong. According to Luo, inside the rosewood pagoda are Buddha statues gifted by former Dalai Lamas and Panchen Lamas to emperors as tributes. The pavilion also houses enamel mandalas for three main Buddhas of esoteric Buddhism, as well as many gold and copper Buddha statues, ritual articles, porcelain pagodas and thangka paintings. Some of the treasures came from Tibet and Mongolia as tributes or hailed from India and Nepal. Some were made by the imperial household department.

Most of the thangkas were painted more than two hundred years ago, in and around the year 1750, when the pavilion was first built. Heavy curtains prevent the sun from damaging the thangkas or their colors. Under torch light, bright hues of the mineral pigments of the paintings are still vibrant. “Those thangka paintings have been hanging there since the day they were finished and never put away,” says Luo. “But they remain as fresh as ever.” Most of the 1,970 thangka paintings in the museum were composed by Tibetan painters during the reign of Emperor Qianlong.

Some large-scale wooden structures and porcelain pagodas have been fitted with earthquake-proofing equipment, but most relics remain exactly the same as they have always been. The pavilion is so crowded with relics that visitors would frequently bump into them¡ªa major reason the pavilion isn’t open to the public. However, it has been included in the “Digital Museum” plan, and will be even more vividly displayed to the public with the help of virtual reality technology.

Visitors looking for Tibetan Buddhist art treasures can visit Xianruo Hall in the Garden of the Palace of Benevolent Peace, which was just renovated and reopened to the public last year, according to Luo. Xianruo Hall served as the place where empresses and imperial concubines worshipped Buddha.

The Palace Museum witnessed the prime of Tibetan Buddhism in China.

In 1653, the tenth year of the reign of Emperor Shunzhi, the emperor welcomed the fifth Dalai, then leader of Tibetan Lamaism, whom Shunzhi dubbed the “Dalai Lama.” In 1713, Emperor Kangxi gave the fifth Panchen the title “Panchen Erdeni,” formally acknowledging the political and religious status of Dalai and Panchen in Tibet. Subsequently, Tibetan Buddhism prospered and the volume of Tibetan Buddhist halls in the Forbidden City swelled.

“After waking up, emperors would light incense from one hall to another before having breakfast in the Palace of Heavenly Purity,” explains Luo. “The area of Buddhist halls was very important to them.”

Through Zhaofu Gate to the north of Yuhua Pavilion is a square where large-scale Buddhist activities were once held. The prayer flags they used still remain. At the end of each year, emperors would take part in an “exorcism” ceremony, the highest-level Buddhist event in the royal court. On that day, emperors would sit side-by-side with the Dalai or Panchen along with other senior monks, manifesting the dominant status of Tibetan Buddhism in the Qing Dynasty.

Today, visitors can still feel the profound influence left by the plentiful Tibetan Buddhist articles. The Palace Museum houses 42,000 religious relics, of which 80 percent are related to Tibetan Buddhism.

After graduating from Peking University in 1989 with a degree in archeology, Luo Wenhua went straight to work at the Palace Museum. Today, not only is his English fluent, but he is also well-versed in Tibetan, Sanskrit and German.

“Many relics are scattered throughout the monasteries in Tibetan-inhabited regions,” laments Luo, speaking on the protection of Tibetan Buddhist relics. “We don’t even know how many remain because there has never been a systematic survey, let alone how to take protective measures.” In his eyes, China’s hub of Tibetology study is Beijing rather than Tibet. Tibetan-inhabited regions are home to myriad precious relics, but locals are not all conscious about the importance of protecting them. Due to a lack of funds and professionals, many relics have not been catalogued and some are sold away to overseas buyers. In recent years, China has strengthened supervision of relics and instructed Customs to check more closely. Compared to the 1980s, fewer relics are being lost.

To better protect relics in Tibet, the Palace Museum and the government of the Tibet Autonomous Region signed an agreement on relic protection. The two parties will cooperate to build digital museums, study and restore relics, hold exhibitions and publish research. Archaeological research in the autonomous region will be carried out step by step. Experts from the Palace Museum have begun contributing to the protection of relics in Jokhang Monastery in Tibet.

It so happened that the exhibition “Across the Silk Road: Gupta Sculptures and Their Chinese Counterparts during 400-700 CE” took place in the Palace Museum when the reporter visited it. The curator of the exhibition, Luo Wenhua, has visited India many times. “India has a wealth of antiques and cultural sites,” says Luo. “Historically, China and India conducted frequent exchanges, but in modern times, people of the two countries know little about each other.” Luo thinks China and India should strengthen cultural communication. Every time he visited India, he brought back a lot of books about Buddhism, which he still treasures.

The West has shown tremendous interest in Tibetology research for more than a century. Buddhist culture originated in India. However, the United States, Britain, France and Germany have accomplished fruitful achievements in studying Tibetan Buddhism, especially of the Himalaya area. China should work with these countries.

Shan Jixiang, director of the Palace Museum, hopes the organization can take advantage of its rich relic resources and serve as China’s capital of Tibetology study, promoting exchange with domestic and international experts alike.

The Palace Museum is China’s largest museum of ancient culture and arts and a globally celebrated landmark. At the end of 2016, the documentary Masters in the Forbidden City hit cinemas in China, giving the public a glimpse of professionals in the ancient imperial palace, which is continuously becoming more open to the world.