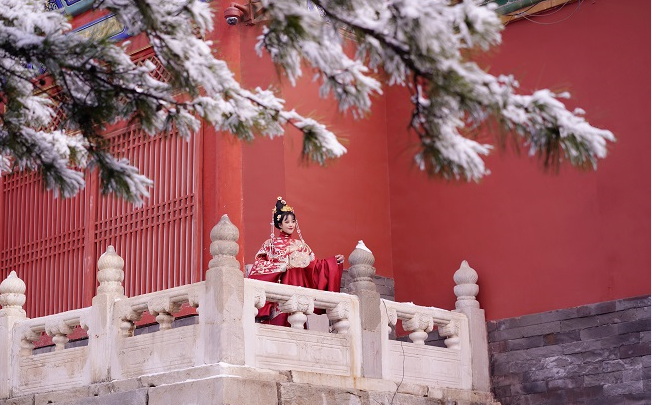 A woman wearing a wedding gown with the Ming Dynasty (1368-1644) style designed by Tingyuexiaozhu. The gorgeous wedding dress features a shoulder pattern of a phoenix flying amidst peony flowers, symbolizing good luck, elegance and wealth, and the front pattern features ocean waves and cliffs, symbolizing longevity and happiness. courtesy of Zhuo Tongzhou

The book Zuo Zhuan, or Commentary on the Spring and Autumn Annals, by Zuo Qiuming, a historian in the Spring and Autumn Period (770-476 B.C.), claims that China got its ancient name “Huaxia” because the country was known for grand ceremonies (xia) and beautiful clothes (hua). Huafu, or traditional Chinese clothing, refers to costumes worn by the Han people and other ethnic groups from the time of the mythical Yellow Emperor some 5,000 years ago until the fall of the Ming Dynasty (1368-1644).

In recent years, huafu, reflecting the aesthetics of traditional Chinese culture, has been popular among young Chinese people. About three-quarters of huafu buyers are between 16 and 24 years old, a group that regards wearing traditional costumes as a way of rediscovering and experiencing traditional Chinese culture. China has at least 4 million huafu lovers and more than 1,500 huafu shops. The emerging huafu market has embraced an annual sales volume of hundreds of millions of dollars and created an important cultural phenomenon of converging fashion trends with traditional culture.

Across thousands of years of development, traditional Chinese clothes from different dynasties adopted distinctive styles and reflected the environment, textile skills, and aesthetic tastes of different eras. Wearing huafu is like wearing Chinese history. It revives ancestral pursuit of beauty across historical periods through appreciation of the enduring artistic aura and historical profundity of traditional Chinese culture.

The respective plain, gorgeous, unadorned and elegant costumes of the Han (202 B.C.-220 A.D.), Tang (618-907), Song (960-1279), and Ming dynasties are the most popular among the huafu community. Today, the clothing forms are generally divided into two categories: One seeks to replicate every exquisite detail of unearthed cultural relics of clothing while the other adds traditional Chinese elements to Western-style clothing and explores combining Chinese culture with global fashion by altering or improving traditional clothing forms.

Today, an increasing number of Chinese young people wear huafu when attending cultural events such as a guqin (Chinese zither) concert or poetry recital or performing rituals for traditional festivals such as Mid-Autumn Festival, Double Ninth Festival, or Lantern Festival. Modern huafu has evolved from fancy dress to daily clothing after more than a decade of development. Although the attire has endured a mixed reception from the general public, the traditional clothing inarguably adds a new dimension of vitality and diversity to modern cities.

Huafu is also being seen more frequently in public places. An estimated 2,000 huafu clubs operated globally by the end of 2019, and the total volume of huafu lovers has maintained a high annual growth rate of more than 70 percent for four consecutive years. Huafu culture has been tightly embraced on social media where many young minds gather. Huafu-related videos have received more than 43.4 billion views on the short video platform TikTok. Videos depicting huafu or traditional Chinese dance on the video sharing website Bilibili have been followed by 83.47 million fans, 83 percent of whom are under the age of 24.

For thousands of years of dynastic history, the development of huafu not only reflected the evolution of traditional clothing, but also propelled the inheritance of traditional culture. An obscure niche hobby in the past, huafu now serves as a creative channel to represent traditional Chinese culture. The efforts and creativity of huafu enthusiasts are likely to lift it to the status of a cultural icon of the Chinese nation.

As a young huafu fan posted, “the revival of huafu is by no means the destination, but a new starting line.”