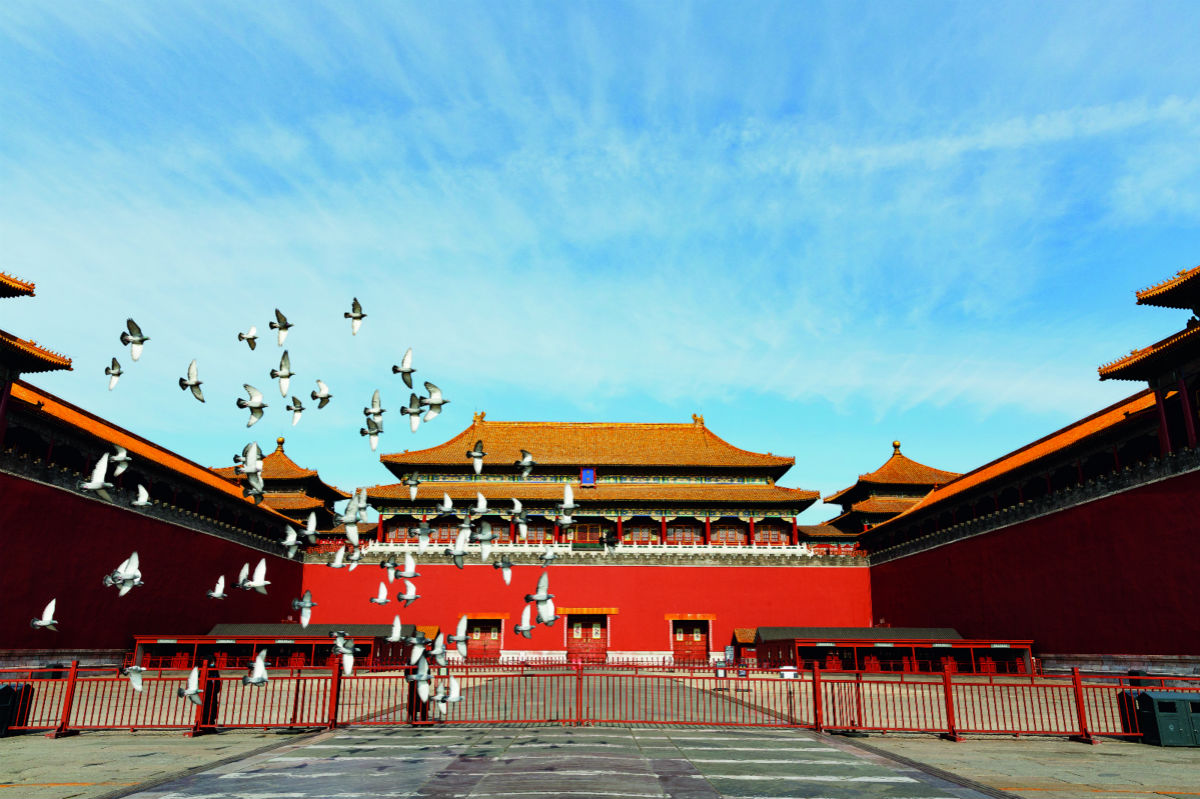 The Meridian Gate, the main gate of the Forbidden City. The Forbidden City covers a land area of 720,000 square meters (about a million with the moat included). Only four gates are open: the Meridian Gate and the Gate of Divine Prowess, which are symmetrical to each other along the south-north central axis, and the East Prosperity Gate and the West Prosperity Gate on both sides of the central axis. In the past, the main entrance was exclusively reserved for the entrance and exit of the emperor, which occurred rarely. It was mostly used to travel to altars and temples to offer sacrifices to heaven, earth and ancestors. The empress was allowed to enter once through the main entrance on her wedding day, and the top three scorers at the palace examination could exit once. by Duan Wei/China Pictorial

Images of the Forbidden City: Beauty Transcending Time
Scan with wechat to share

The year 2020 marks the 600th anniversary of the completion of the Forbidden City and the 95th anniversary of the founding of the Palace Museum. A total of 24 emperors from Yongle to Puyi lived in the largest and most well-preserved existing imperial architectural complex in the world. After China’s monarchy ended in 1911, the Palace Museum was established in 1925 to preserve the imperial palace of the Ming (1368-1644) and Qing (1644-1911) dynasties and the ancient cultural relics collected within. When the Forbidden City’s function as the imperial palace ended with the monarchic era, it was transformed into a public cultural space open to all for viewing, appreciation and interpretation.

A masterpiece of ancient Eastern architecture, the Forbidden City has left incomparable beauty in classic images. The building complex was brilliant in terms of site selection, planning, layout, structure, modeling and coloring. Its overall dimensions veer off at random discretion, as do its density, width, distribution, and light and shadow. It captured the unity, completeness, modesty of the city, as well as the correspondence, harmony, balance and grace it developed. Romantic feelings about the Forbidden City and inspiration in its details are embedded in a profound and exquisite cultural background.

The Forbidden City has been condensed into a classic image. Whether as a whole or in part, or even the most trivial details or neglected corners, the Forbidden City can withstand the history and the imagination of the present and the future.

The Forbidden City is both a palace and a royal courtyard. This courtyard designed to foster human relations at the core with structures surrounding it represents the basic unit and a major feature of ancient Chinese architecture. But the outward expansion seems limitless, presenting a grand and graceful overall vision composed of upright rule, imagination, willpower, and financial and material might.

The most striking visual impact of the Forbidden City is found at a higher angle revealing continuous rows of golden roofs. Under the blue sky, white clouds and shining sun, the golden glazed tiles covering the roofs glitter brilliantly. The roofs are also “home” to various animal statues. They stand on the roofs of nearly 100 groups of buildings in the Forbidden City, forming a spectacular sight. Emperors of the Forbidden City once worshiped them as divine animals protecting the palace.

In the Forbidden City, immortal glazed flowers “bloom” vigorously all year round. Large flower beds in the Imperial Garden and the Palace of Tranquil Longevity are all composed of glazed flowers. In the middle of the screen walls on both sides of the Gate of Heavenly Purity, the Gate of Tranquil Longevity and the Gate of Compassion and Tranquility are large baskets composed of various kinds of glazed flowers and plants. Such flower patterns are found around almost every palace gate. Most are lotus flowers with religious significance symbolizing fertility, happiness and virtue, large passionflowers symbolizing nobility, peonies symbolizing wealth and dignity, chrysanthemums symbolizing fidelity and joy, orchids representing purity, and twisted twigs and rolled grass symbolizing peace and longevity. The themes of these allusions are perfectly in line with the magnificent buildings in the Forbidden City because both boast exquisite patterns, deftly measured proportions, harmonious colors, and elegant shapes.

Red, yellow, and gray constitute the basic colors of the Forbidden City. “Forbidden City red” is the color found on all walls and external facades of buildings, while the roads, courtyards, squares, and indoor floors are gray.

Sections between the golden roofs and red doors and windows were painted with a continuous strip of colored ribbons, winding and floating among the palaces and pavilions. All the hues of the Forbidden City, inside and out, form a striking pallet.

The frozen and evolving image of the Forbidden City still belongs not only to its creators and all the people who have seen and minded it over the past 600 years, but also to the eyes and hearts of everyone who visits in the future. Anyone can intuitively feel the expressions of traditional Chinese culture and the strong enlightenment of Eastern architectural aesthetics from the Forbidden City.