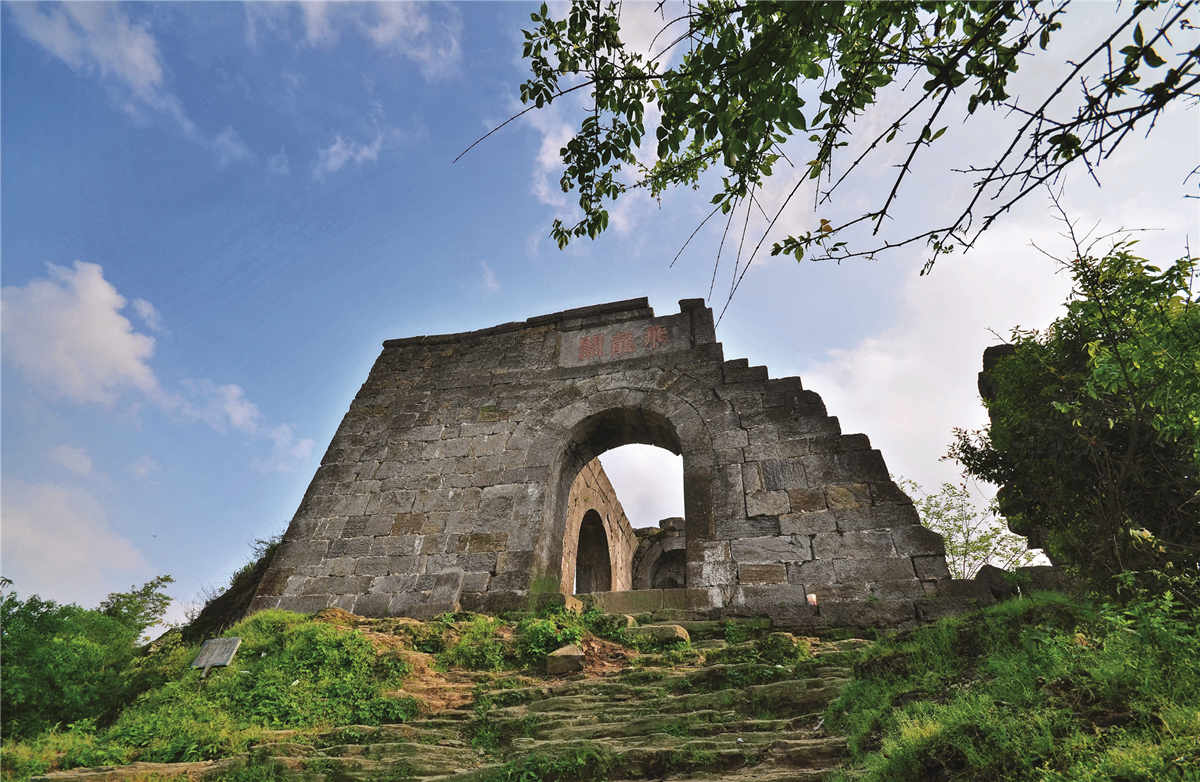 The ruins of the Feilong Pass, the entrance to Hailongtun Tusi Fortress, retain much of the its original shape. (Photo by Peng Hao)

Lost Fortress to World Heritage
Scan with wechat to share

Against mountains, the magnificent Hailongtun Tusi Fortress in Zunyi City, southwestern China’s Guizhou Province, was jointly built by the Southern Song Dynasty (1127-1279) and the Yang clan, a local tribe whose leader was appointed as “Tusi” (chieftain) of Bozhou, in 1257. Later, the fortress was destroyed in warfare in 1600. Now, it is renowned as one of the oldest, largest, and best-preserved Tusi fortress sites in southwestern China.

From discovery to status as a historical site under national-level protection and then the common wealth of humanity, the site of Hailongtun Tusi Fortress achieved a massive transformation in the eyes of archaeological workers.

Cultural Treasure Trove in the Mountains

Established in the Yuan Dynasty (1271-1368) and dissolved during the reign of Emperor Yongzheng in the Qing Dynasty (1644-1911), the Tusi chiefdom was a way for the royal court to rule over ethnic minorities in the southwestern region.

The three sites inscribed on the World Heritage List are the well-preserved remains of the Tusi chiefdom from its heyday, which were the ruling centers of chieftains at different levels including a military fortress at the highest level.

Despite written records, for a long time, no one knew where the site of the fortress was. “I started searching for the lost fortress at Hailongpo but found nothing,” he said. “I continued the search effort, for which I almost traversed every corner of Zunyi.”

After two years of efforts, Ge finally found the site of Hailongtun Tusi Fortress hidden deep in the mountains, and it was confirmed as a provincial-level cultural relic site in 1982. In 1999, he led preliminary excavation work of the site and discovered countless human bones, broken armor, and weapons in the soil. “A thrilling battle 400 years ago was nearly narrated by the remains that we found,” he said.

In 2001, the ruins of Hailongtun Tusi Fortress were upgraded to a historical and cultural site protected at the national level. Archaeological work at the site also entered a lengthy and difficult stage of cultural relics sorting. From 2012 to 2014, Guizhou Provincial Institute of Cultural Relics and Archaeology conducted two excavations on the site and unearthed tens of thousands of relics including broken tiles, ridge beasts, and porcelain. The discoveries not only uncovered a splendid side of the lost mysterious Tusi chiefdom, but also clarified changes in the outline of Hailongtun in different periods.

For archaeological workers, the Hailongtun site is like a cultural treasure trove of vast historical information.

July 4, 2022 marks the seventh anniversary of the addition of the site of Hailongtun Tusi Fortress on the World Heritage List. Liu Qingzhu, renowned archaeologist and member of the Chinese Academy of Social Sciences, wrote in the preface to the forthcoming Hailongtun Archaeology Report that the Tusi sites in China are highly significant to history and science for the political and cultural recognition of a unified multi-ethnic country.

He remarked that the Hailongtun site has served as an encyclopedia of China’s Tusi studies, providing a complete and powerful sample for researching the ancient chieftain system.

Restoring cultural relics and reproducing the beauty of ancient Chinese architecture through science and technology are the goal of all Hailongtun cultural conservation workers.

The Haichao Temple repair project was a highlight of the Tusi sites’ application for the World Heritage status. Located atop the Hailongtun fortress, the temple was built on the site of a new palace for chieftain Yang Yinglong in the Ming Dynasty (1368-1644). After centuries of weathering, it became very difficult to repair. Therefore, the designer stayed close during the entire repairing process of the temple to minimally reduce changes to the survived buildings and maximally preserve their original shapes.

To better protect the ancient city wall and show tourists the steep Hailongtun defense system built on the mountains, the Zunyi Hailongtun Cultural Heritage Administration launched repair and maintenance work on the fortress wall in December 2017.

From a lost fortress hidden in barren mountains to world-renowned cultural heritage, the Hailongtun Tusi Fortress and its legends and history are getting discovered by more and more people. Its glory as a World Heritage site keeps shining, and the protection and inheritance of the site is only expanding.

Inscribed onto the World Cultural Heritage List in July 2015