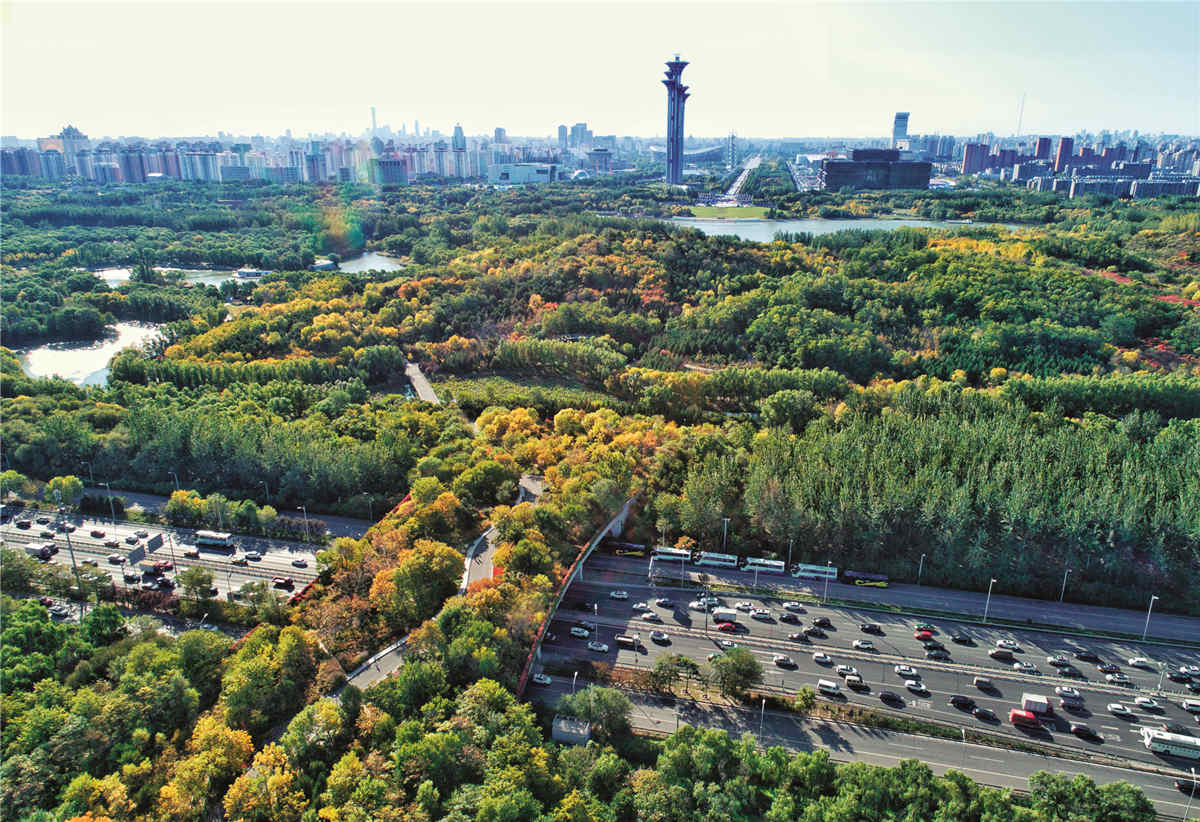 Olympic Forest Park is bisected into north and south sections by the North 5th Ring Road. An overhead ecological corridor was built across the road to avoid fragmentation of the park’s ecosystem. courtesy of TUPDI

Olympic Forest Park: A Breath of Fresh Air
Scan with wechat to share

Built as part of the Olympic Green for the 2008 Summer Olympics, Olympic Forest Park spans 680 hectares at the north end of Beijing’s central axis. In 2008, the forest park earned the International Federation of Landscape Architects of Asia-Pacific Region (IFLA-APR) President’s Award in the Landscape Planning Category. The same year, it was granted the First Prize for Urban Green Space at the 5th Torsanlorenzo International Prize, the first time a Chinese landscaping project won the honor.

In the past, Beijing’s central axis was primarily populated with famous historical buildings such as the Forbidden City and the Monument to the People’s Heroes. Construction of the Olympic Green expanded the length of the central axis spatially, while new competition venues such as the National Stadium (Bird’s Nest) and the Water Cube enriched its cultural connotations by adding Olympic elements.

Hu Jie, director of the Research Center for Landscape Architecture Planning at Tsinghua Tongheng Urban Planning and Design Institute (TUPDI), served as the chief designer of Olympic Forest Park. According to him, the forest park is an urban green space on Beijing’s central axis, and a dragon-shaped water system featuring Olympic Lake and a sightseeing waterway runs through the entire Olympic Green from north to south.

Han Yi, Hu’s assistant and deputy chief engineer at the TUPDI Research Center for Landscape Architecture Planning, participated in the landscape design for Olympic Forest Park. “Landscaping is the soul of Chinese gardens,” Han said. “This is the core concept of the design of Olympic Forest Park.” The design of the forest park followed the idea of “laying hills and managing rivers” in traditional Chinese gardening. With Yangshan Mountain as its “bones” and the water system as “veins,” the forest park features captivating landscapes of rolling hills and zigzagging rivers.

According to Han, the water scenery of Olympic Forest Park embodied the vision of delivering a “green Olympics, high-tech Olympics, and people’s Olympics.” The design of the water system in the park adhered to the general principle of “promoting eco-friendliness and efficiency based on local conditions.” Connecting and dredging existing channels and ravines enabled the entire park to form a water system integrating a variety of water bodies including lakes, wetlands, and rivers.

“At first, we didn’t plan on constructing a dragon-shaped water system and only aimed to build a man-made water system connecting Olympic Forest Park in the north with the Olympic Central Section in the south to make the Olympic Green a whole,” Han recalled. “We then designed zigzagging waterways circling architectural structures. We never saw the resemblance to a Chinese dragon until the final blueprint was completed. Formation of the dragon-shaped water system was serendipitous.”

Olympic Forest Park is now considered a “green lung” on Beijing’s central axis. A display of frontier ecological technologies, it adopted a wide range of green techniques such as near-natural forest management, waste recycling and reuse, and energy-efficient architecture. Han noted that the park also uses ecological technologies such as recycled water treatment, rainwater collection, sewage reuse, smart irrigation, and ecological anti-seepage. According to him, all water for landscaping in the park is recycled water from sewage treatment plants as part of a demonstration project for water recycling and reuse in Beijing.

The forest park was an integral part of the pledge to provide the world a “green Olympics.” Germany-based service provider in international cooperation for sustainable development GTZ commented that the park robustly protects a sound environment for sustainable development and amplifies Beijing’s voice on advancing green development. Today, the 14-year-old forest park is deeply integrated into the local ecosystem. “I believe that over time, Olympic Forest Park will become more beautiful and pleasant as the city does,” Han declared.