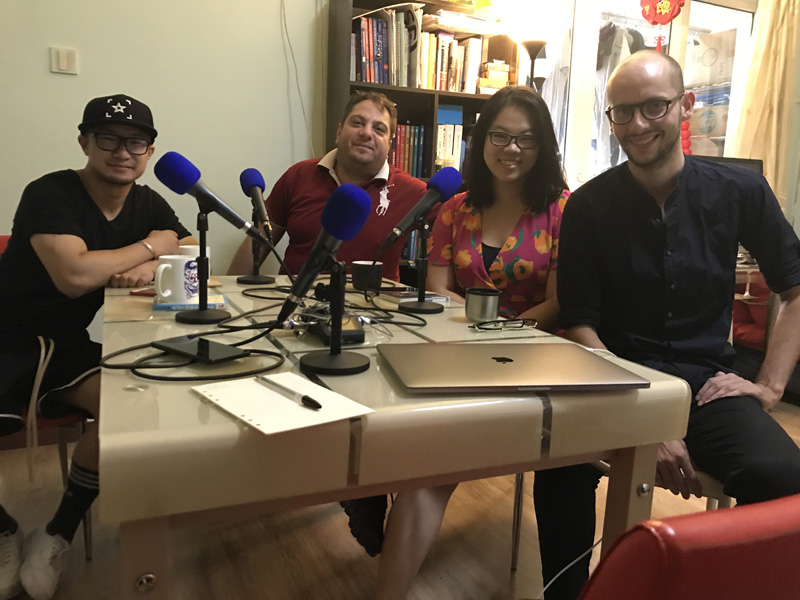 Listening to podcasts is an intimate experience therefore content producers must develop other ways to reach out to an audience.

Only 53 percent of China’s population had access to a smartphone in 2019, but the constantly growing number of users is pushing a traditional medium more online: radio podcast show. And several Chinese platforms including Himalaya FM, Lizhi FM or NetEase are now big players in the podcasting world. In 2018, Himalaya FM claimed 40 million monthly users as investment in marketing podcasts rose sharply. In 2013, only three million U.S. dollars was invested in advertising for the medium, a figure that is expected to surpass 190 million in 2020.

Because I work in the field of documentaries and news, I listen to a lot of podcasts with hopes of better understanding the country in which I now live. I soon realized that no one was doing an English show about China’s cultural industry. All the English podcasts about China focused on history, classical culture or economics. So, I decided to launch a show of my own about the cultural industry called Middle Earth – China’s cultural industry podcast. I first made the decision to repay some of the knowledge I have enjoyed from all the wonderful shows out there and then as a method of reaching out to producers and creators I would normally never have a chance to meet. Now I had already the privilege of interviewing more than 70 people including several cultural heavyweights such as Song Wen, founder of FIRST Film Festival, and Tang Yiqing, CEO of Happy Juzi Media.

Thus far my program has all been in English due to my skills blocking access to the burgeoning Chinese podcast industry. But not for Joshua Ogden-Davis, a Shanghai-based translator who started working with Himalaya FM on two shows in Chinese after co-writing the book “Making Friends with Foreigners”, which was published in Chinese. “This has been a fascinating opportunity for me,” he declared. “After writing our book, we got in touch with Himalaya FM and designed a show based on the book for the Chinese audience. It was followed by a second podcast for VIP users, for which I got a commission. I have even been recognized in the street just from the sound of my voice.”

But podcast creators in China vary greatly. Some like Yu Wanying who produces and hosts the show Museelogue focusing on museums. Wielding a degree in museology, she has been hosting the podcast since August 2015. “To be honest, I’m still partially supported by my family, but each episode attracts around 100,000 listeners,” Yu stated. “I do ask them to support the show. So far, more than 200 people are patrons of the podcast.” Her efforts to release top quality content paid off when Apple Podcasts featured her on the frontpage of their Mandarin podcasts for several weeks.

Others are less reliant on listeners’ support thanks to backing of an established media company like Story FM. Producer Kou Aizhe manages a team that releases three episodes weekly for 900,000 subscribers. “I am a big fan of This American Life, and in 2016 I decided to do something like that on my own: to collect stories from people. The company ‘Elephant Guild’ thought such an effort would be an interesting way to develop content, so they approached me to work on this format for them,” Kou Said.

I launched my own show, but I didn’t have many listeners at the beginning, but after signing up to join the Sinica Network of the independent media Sup China I saw my listener base multiply by a factor of 10. Listening to podcasts is a really intimate experience, and subscribers don’t tend to share much about it on social media, so you must find other ways to reach out to an audience.

Interestingly, China and the West share a major commonality and a fundamental difference. First, the ecosystem of the platforms is different. The West has an approach more like “Internet 2.0” to podcasting: hosting services, program distributors and RSS subscriber applications for users are completely independent, so it is often hard for content creators to find an audience. China has a more centralized system: Audio platforms have combined services to make it more like an audio version of YouTube. Anyone can upload anything for free to these platforms, and they will place ads on your show to cover their costs. One thing that podcasters around the world share is difficulty making a living. Even as the medium becomes more popular, content creators still rely on extremely limited income streams: commissions from a big media company or a podcasting platform like Kou Aizhe and Joshua Ogden-Davis, relying on patrons like Yu Wanying or with the sell of a product. The latter is my case because my show helps promote my consulting firm focused on helping Western society approach China and make cultural projects realities.

It is interesting that Chinese companies are reaching out to the global market after podcasting emerged domestically. Himalaya FM created the podcast app Himalaya to tap the English and Japanese markets. Renee Wang, the Chinese CEO of the app Castbox, drew inspiration from China’s media. “Spotify still doesn’t have any sort of comments feature, but a big part of both NetEase Music and QQ Music is extensive discussion of music,” she noted. “Western companies can learn a lot from Chinese apps.”

My focus is too interview people, so now my goal is to create a conversational show in Chinese to serve an audience in the country where I live. It will be called “I made it.”

The author is a French producer at China Compass Productions.