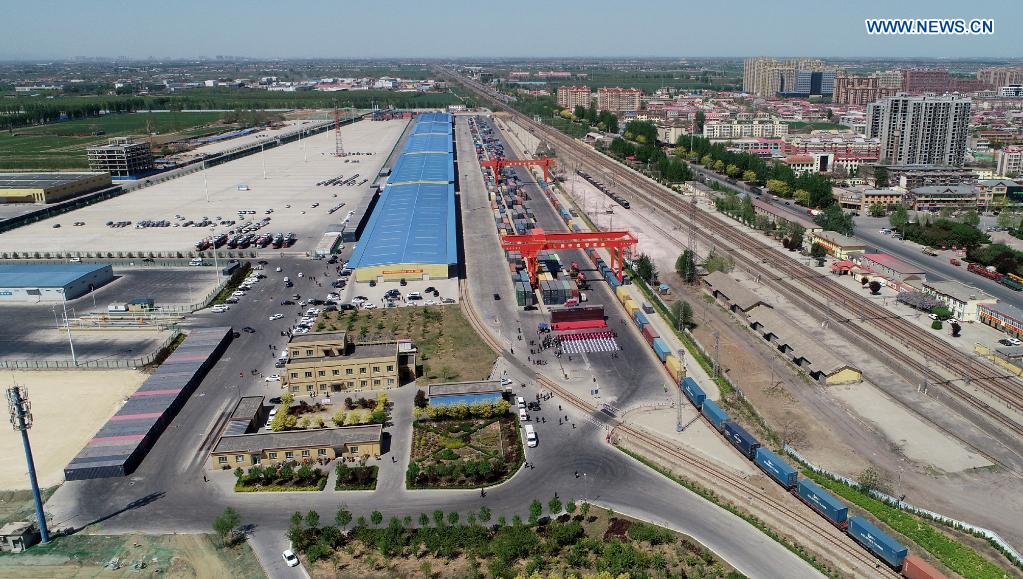 The Port of Hamburg is one of Europe’s biggest hubs for trade with China. In 2020 alone, more than 2.4 million standard containers (TEU) were handled in Germany's largest seaport with China. Nearly one-third of all containers passing through Germany’s largest seaport have China as their destination or origin. A total of 15 liner services connect Hamburg with all major Chinese ports.

One of its main strengths is the port’s connection to the European railway network as no other port in Europe offers a similar, extensive coverage. The Port of Hamburg is the central hub for China traffic not only for Germany, but also for Austria, Poland, the Czech Republic, Russia, Hungary, Slovakia and Switzerland.

Both the Hamburg Port Authority (HPA) and the companies in the port used the last year to further expand and modernise the infrastructure and equip handling facilities with the latest technology. The major terminal operators Hamburger Hafen und Logistik AG (HHLA) and EUROGATE invested in additional container gantry cranes for the handling facilities at Waltershofer Hafen. The container terminals in Hamburg are thus fully equipped to handle ultra large container ships, which can now also reach the port more easily. The fairway adjustment was completed in February this year. The passing  box, built jointly by the HPA and the Federal Waterways and Shipping Administration, can now be used over its full length and width. The Elbe fairway has been widened to 385 metres along the eight kilometres between Wedel and Blankenese. As of today, seagoing ships with a combined width of 104 metres – instead of the former 90 metres – will safely be able to pass each other.

All parties in and around the Port of Hamburg are constantly working on digitalising the physical transport chains. Digital transport processes ensure a much smoother connection between sea and hinterland traffic. This benefits all players in the port – from the terminal operator to railway undertakings. Process automation also ensures even greater efficiency, i.e. by deploying Automated Guided Vehicles at the terminals. Intelligent traffic routing ensures a more efficient traffic flow not only on the roads and railways, but also on the Elbe.

The Port of Hamburg is the source or destination for approximately 38 percent of national rail freight traffic. For the German railway infrastructure operator DB Netz, northern Germany is the most important investment area and work is continuously being carried out to repair and modernise the surrounding infrastructure. Germany's largest railway port is thus not only optimally connected to the national rail network, but also to the European and Russian networks.

In 2020 Hamburg’s seaport-hinterland transport by rail accounted for a volume of 46.6 million tons and 2.6 million TEU, remaining fairly stable. The 4.4 percent decrease in containers transported by rail was considerably smaller than the drop in container throughput as a whole. “In terms of volume, 2020 was the third-best year, and in terms of the number of containers carried it was the second-best year in the history of the Hamburg Port Railway. The railway was even able to increase its share of the modal split in seaport-hinterland traffic by 1.3 percent to 50.7 percent.

On the tracks of the Hamburg Port Railway, approximately 200  freight trains and 5,500 wagons are handled rapidly and efficiently every day. There are now more than 160 rail operators using these tracks, with a dense network of wagon load traffic as well as shuttle and block train connections throughout Europe. Every week, there are nearly 2,000 connections to and from Hamburg – just over 230 of them per week with China. The cities Changchun, Changsha, Chengdu, Chongqing, Dalian, Ganzhou, Harbin, Hefei, Jinan, Shenyang, Shenzhen, Shilong, Suzhou, Weihai, Wuhan, Xiamen, Xi'an, Yantai, Yiwu and Zhengzhou are linked to Hamburg by regular train services via the New Silk Road. In November 2020 and April 2021, two more connections between Hamburg and Xuzhou and Shijiazhuang respectively were added. Throughput on intercontinental rail traffic between Hamburg and China alone increased by at least seven percent in 2020, bringing the total volume to 107,000 TEU. Up to 40 trains per week are meanwhile running between various provinces in China and Europe’s largest rail port. The New Silk Road is an important addition to seaborne services on the global supply chain between China and Germany. Positive developments show that there is a warm welcome being given to the services being offered.

An updated overview of the connections is available at hafen-hamburg.de. Port of Hamburg Marketing as the publisher provides a free online database at https://www.hafen-hamburg.de/de/intermodal.

The Hamburg Port Railway is the link between the cargo terminals and the European rail network. Whether the goods are transported from the port to the four corners of the world or vice versa, the Port Railway provides the necessary infrastructure for every rail transport company that wants to access the Port of Hamburg. In recent years, important strategic expansion projects have been completed that are significant for the entanglement of transport in the Port of Hamburg.

Although rail freight transport still lags behind its maritime counterpart in terms of the volume of goods transported, it "definitely plays an important role" in boosting economic relations and trade between China, Germany and other European countries. The signs are good. More trains and ships have the Port of Hamburg as their destination or starting point. The economic forecast, especially for German-Chinese business relations, is very good, as you hear from many institutions.

Many large logistics companies based in Hamburg, such as Dachser, Kühne+Nagel or Hellmann, were already making intensive use of the transport routes of the new Silk Road before the COVID-19 pandemic. The first test train from Xiangtang reached the port of Hamburg as early as 2008. Due to the suspended scheduled connections and the limited capacities in air freight during the pandemic, the demand for train connections also increased in the Port of Hamburg. The first train from Jinan, for example, arrived at the DUSS Hamburg-Billwerder rail terminal in April 2020 in the midst of the pandemic. We were able to get medical supplies to Hamburg very quickly during the crisis via the train connections. Thanks to the excellent connections to the European hinterland, Hamburg can play a valuable part in supplying the population with relief goods and keeping the shelves in the supermarkets full, both by waterway and by rail. "Thanks to donations from our friends and partners in China, HHM was able to supply several businesses in the Port of Hamburg with respirators when there were capacity constraints in Germany in 2020 (https://www.hafen-hamburg.de/en/news/face-masks-for-hamburg-and-the-port-of-hamburg---36821)."

Port and rail operations at Germany's largest multipurpose port were able to continue as planned without disruption during the pandemic. As Europe's largest railway port and Germany's third largest inland port, Hamburg is of very great importance for supplying the population and the economy in Germany. At the beginning of the pandemic all parties in the Hamburg port successfully rose to the challenge to keep the port running without interruptions for 24/7. In addition to COVID-19, ship delays of two weeks are still ongoing. Hardly any ships have reached the Port of Hamburg on time since the beginning of the year. The delayed arrival of ships is not only due to the global pandemic and its consequences, but also due to other factors as unfavourable weather situations during the winter months and Brexit. The Suez blockade then exacerbated the situation. However, the major terminal operators in Hamburg have adjusted their operations to the situation and are able to react flexible to sudden changes.

The Port of Hamburg leads all ports in rail transport. Naturally, its excellent position as a transport hub also contributes to all rail connections with China. We see that there is further potential for growth. Hamburg and its logistics companies are in any case prepared to further intensify cooperation with partners and friends from China.

Thanks to the representative offices of the Port of Hamburg in Shanghai and Hong Kong, it was also possible to participate in important events and trade fairs in China despite the Corona-related travel restrictions (e.g. CIIE https://www.hafen-hamburg.de/en/news/ciie-successful-trade-fair-despite-corona---37011, CILF, Asian Freight, Logistics and Supply Chain Award 2020 https://www.hafen-hamburg.de/en/news/asian-freight-logistics-and-supply-chain-award-2020-the-port-of-hamburg-again-honored-as-best-seaport-europe---37003). In addition, the Hamburg Liaison Office informs every week on their social media（WeChat: Hamburg-Ahoi and Weibo:hamburggermany） about the Port of Hamburg as an important hub along the New Silk Road/for China-Europe Railway Express.

The author is Chief Executive Officer of Port of Hamburg Marketing.