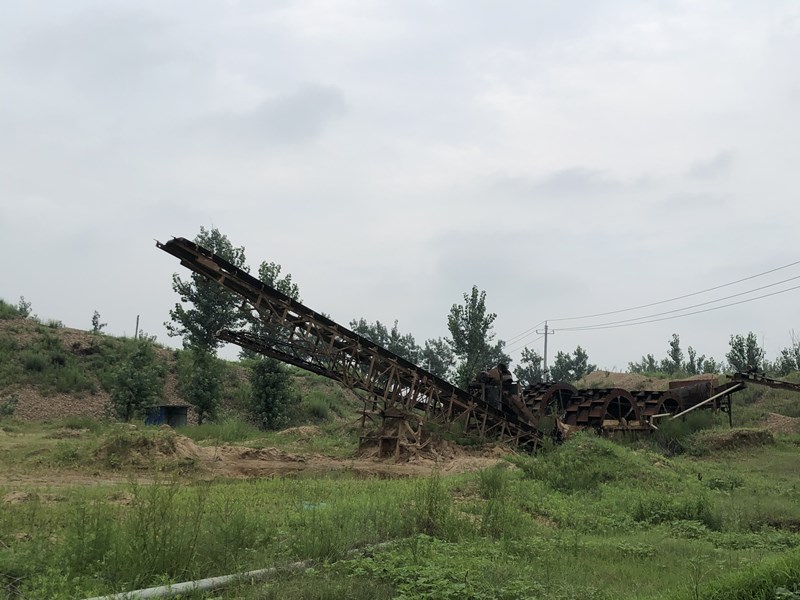 In July 2020, a heavy downpour lasting for a dozen days hit Liangzhuang. Grass grew around a sand dredger. Although the sand dredger was a monster in the eyes of Liang Hong, it represented a changing daily routine for Liangzhuang locals. by Liang Hong

Returning to Liangzhuang Village
Scan with wechat to share

Born in Liangzhuang Village, Dengzhou City, Henan Province in 1973, Liang Hong lived there for two decades. Later, moving from Henan to Beijing, she pursued her further studies until she obtained her PhD. Now, she is a professor with the School of Liberal Arts, Renmin University of China.

With a deep feeling for her hometown and a desire to understand her village and fellow villagers more deeply, Liang and her son returned to Liangzhuang in July 2008. During their five-month stay there, the mother and her son spent most of their time with locals and even had dinner with them every night of the trip. Later, they visited more than 10 Chinese cities including Xi’an, Guangzhou, and Qingdao where they interviewed over 300 Liangzhuang locals working in those places.

Liang published two non-fiction works, China in Liangzhuang and Going Out of Liangzhuang, in 2010 and 2013, respectively. In her works, she depicted real life in a Chinese village in the middle of a transformation, and stirred up wide discussions on China’s rural areas. She received multiple important awards and honors such as the 2010 People’s Literature Award.

In mid-November 2012, I finally turned in the manuscript of Going Out of Liangzhuang. With the long-time pressure suddenly removed, I was not as light-hearted and cheerful as I thought I would be. “I will leave Liangzhuang eventually.” This sentence kept popping up in my head, as if I was suffering from obsessive-compulsive disorder.

For me, the first impulse of going back to the village has nothing to do with exposing a real Liangzhuang to outsiders; the trip was rather a journey to find a spiritual source to make up for my lack and deficiency in internal nourishment. During this process, having my individual psychological needs met was much more important than exploring a collective identity.

I often ponder the relationship between writing and life. For those who have never struggled with mental conflict or suffered from agony, are they able to write about conflict and pain in a real sense? To what place should we “go back” to find inspiration? Should we go back to a life full of challenges and struggles or live exactly the same life we want to write about? I am not sure. Where are today’s Chinese intellectuals trapped? Where can we find real inspiration from life?

Starting in 2011, I began to participate in some programs organized by rural development organizations. I worked as a volunteer and a publicity agent for them. I gave lectures and held discussions with students in rural areas. Sometimes, I conducted field trips to places where I met with locals from all walks of life and discussed various topics with them. These people were the true practitioners who understood real life. They shuttled between rural areas and cities. They went hither and thither to call for the development of rural areas or took pains to quietly do things that might completely fail. The difficulties and frustrations they once faced, as well as the courage and bravery they showed, are something beyond imagining for intellectuals just sitting in their studies. I admire them greatly.

However, I must admit that what I did was mostly out of a sense of duty rather than passion and enthusiasm. I still can’t see myself acting the same way they did. I feel more comfortable “walking” alone in my life, savoring the pain and fulfillment from all things in the universe. I enjoy analyzing and experiencing the complexity, chaos and incomprehensibility in the human world. I love walking on unfrequented forest paths, which lead me deep inside the woods, even though there may be nothing to find. I can only be a writer and researcher.

Can bystanders or writers feel real pain or can they build the moral connection between themselves and people in their writing? Do you choose to be a bystander or a person who takes action? Can a writer and thinker obtain perceptions of real life by just watching? How can we traverse the material world and get into the broader, intangible spiritual world? Those may be the questions that I will continue to pursue for answers.

When it came to the reasons and the significance of returning to Liangzhuang and the difficulties in my writing, I never found the real answers even after several years. However, during the process, I believe I have seen peaks emerging one after another, their outlines and the mists covering them. I’ve had doubts and thoughts, and developed an awareness of problems, which is an accomplishment for someone who is trying to find a spiritual existence. Now, I could finally find something real behind unseen reality. I want to figure out how a real life gives birth to a detachment from the world, where that detachment is going and of what it consists.

It seems that I’ve gained some new strength and I will return again to my studies.

The author is a renowned writer and a professor with the School of Liberal Arts, Renmin University.