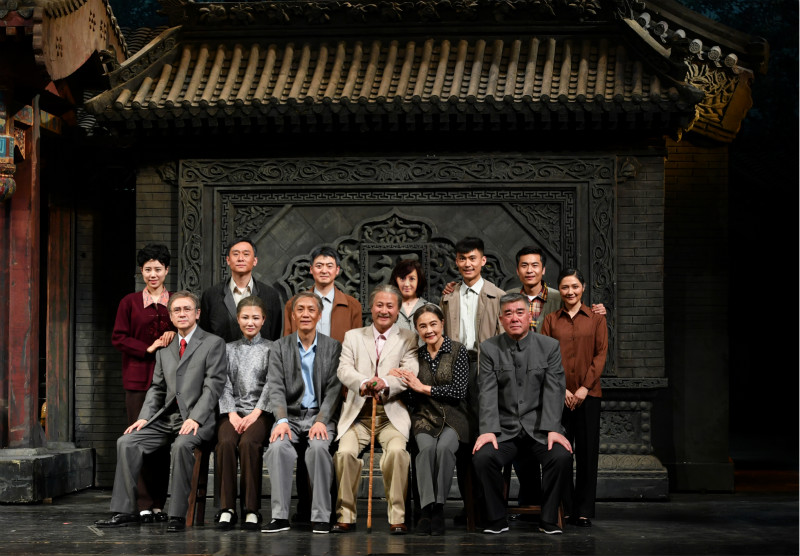 The drama Family Portrait depicts changes of the times, ups and downs of life, vivid Beijing lifestyles and warm neighborhood relationships, showcasing the power of hope and kindness. by Li Chunguang

With the click of a camera, images of a dozen neighbors residing in a small siheyuan (quadrangle dwelling) were captured forever. On January 14 , 2020, the drama Family Portrait took the stage at Beijing People’s Art Theatre. It depicts changes of the times, ups and downs of life, vivid Beijing lifestyles and warm neighborhood relationships, providing a heartwarming and epic visual feast for spectators. Director Ren Ming aimed to portray the power of hope and kindness with the play.

Adapted from a novel by famous contemporary Chinese writer Ye Guangqin and first premiered in 2005, the play depicts the legendary story of Wang Mantang, a construction foreman focusing on heritage buildings, and the great test the industry faced over the past half century to reflect the development and changes of Chinese society over time.

The storyline of the play spans five decades, including several important historical periods from the eve of the founding of the People’s Republic of China to the turn of the 21st century. It involves an ensemble of characters representing the typical personalities or ideas of certain times, such as the construction team leader Wang Mantang and Aunt Chunxiu, a neighborhood committee director.

Renowned actor Feng Yuanzheng, who plays Wang Mantang in the drama, revealed that over the past 15 years since the play first premiered, all actors have been integrated with their respective characters both physically and psychologically as the crew has melded together.

Protagonist Wang Mantang’s touching monologue at the climax of the play was developed by Feng himself. “When I became the character, the words just flowed from my heart,” he explained.

“I know my role from top to bottom,” declared actress Liang Danni, who plays Aunt Chunxiu, director of the neighborhood committee. “Each line, movement or even sigh has been carefully designed and arranged.”

The vivid characters of Family Portrait have kept the play in heavy rotation on the stage of Beijing People’s Art Theatre.

Feng Yuanzheng explained that the play recounts history through stories of ordinary people. He expressed hope that younger generations of actors would still stage the play to ensure it is passed on to become a classic of the era.

This production offers a new interpretation of the masterpiece that connects the past and the present through artists of different eras and radically different backgrounds managing to communicate with each other.

In Ren Ming’s opinion, classic works can be revived in myriad ways. In this version of Miss Julie, the noble title character wears a white shirt and suspenders, while valet Jean is dressed more elegantly. The dance design is simple but modern, and a large mirror positioned at center stage creates a good effect of space extension. “It’s a modern expression,” Ren noted. “We were looking for our own interpretation of the play and explored what the classic means to modern times.”

“When a classic work is interpreted by young performers, amazing new life can be injected into the play,” stated Ren. “The actors inspired me with various ideas during the rehearsals, transforming the stage into an artistic laboratory.”

Along with the changes of the times, Chinese people are finding new ways to celebrate Lunar New Year. The two top-notch theatrical products, Family Portrait and Miss Julie, are meeting the increasingly diverse cultural demands of the Chinese public.