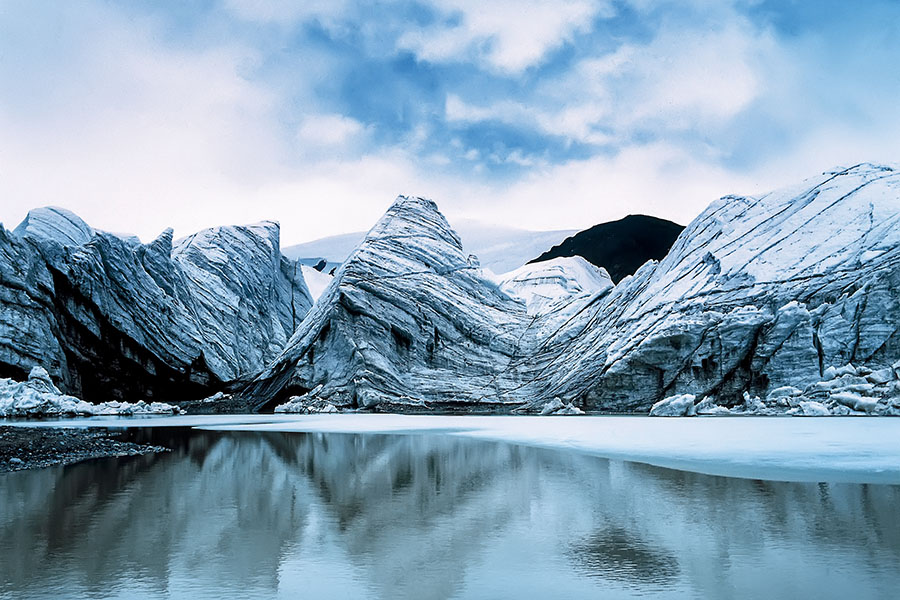 Jiangyuan Glacier. At the center of the Qinghai-Tibet Plateau, Jiangyuan Glacier Nature Reserve surrounds the Gela Dandong Snow Mountains, which are home to many glaciers and the source the Yangtze River. by Cai Zheng

Sanjiangyuan: Source of Life
Scan with wechat to share

Covering 395,000 square kilometers, China’s Sanjiangyuan (literally, “Source of Three Rivers”) National Nature Reserve is home to the sources of the Yangtze, Yellow and Lancang rivers. Dotted with numerous lakes, swamps and glaciers, Sanjiangyuan is a critical source of fresh water for China and thus nicknamed the “Chinese Water Tower.” Its habitat of diverse flora and fauna at high altitudes makes the region acutely sensitive to climate change and a warning flag for the Asian and even world ecology.

For instance, at the end of the 20th Century, due to climate change and human activities, Sanjiangyuan was suffering serious environmental destruction. To restore the region’s ecosystem, in 2000, the San-jiangyuan National Nature Reserve was set up. Since 2005, the Chinese government has been implementing the Sanjiangyuan Protection Campaign. With the first and second phases of the campaign completed, the situation in Sanjiangyuan has already improved.

“In recent years, when we go to countryside, we often see flocks of Tibetan wild donkeys, antelopes, wolves, and even brown bears,” says Gezha, head of Shanglaxiu Township in  Yushu Tibetan Autonomous Prefecture, Qinghai Province. “Sometimes the animals even chase the car.”

According to 2015 statistics issued by Sanjiangyuan Protection Campaign Office, in the prefecture of Yushu alone, the number of bird species has increased from 31 to 61. Population of black-necked cranes has grown from 20 to 200, bar-headed geese from 800 to over 10,000, and Tibetan antelopes, nicknamed “plateau spirit,” from 20,000 to 70,000. Even some of the most threatened flagship species of the Qinghai-Tibet Plateau such as the snow leopard and brown bear are occasionally seen and sometimes even stop by local villages.

After the first phase of the Sanjiangyuan Protection Campaign, the Chinese Academy of Sciences (CAS) assessed the work of the project: Ecological deterioration in the reserve had been abated to some extent, ecological capacity had been improved and the ecological situation of some prioritized areas had been greatly improved.

After a decade of protection, water volume in Sanjiangyuan has been estimated at up to 8 billion cubic meters, equal to 560 times the amount of Hangzhou’s West Lake. Nearly 1,000 drying lakes have regained life and now glisten on the plateau.

Compared to 2004, the region produces 30 percent more grass and the coverage rate of grassland has increased by 11.6 percent, the forest coverage rate has grown from 3.2 to 4.8 percent, and the amount of conserved soil has reached 723 million tons a year, from 546 million tons. Grassland degradation has been curtailed immensely. In particular, the black barrens in the Dawu area of Golok Tibetan Autonomous Prefecture and the Batang area of Yushu have been well controlled, and the vegetation coverage rate in the two areas has exceeded 80 percent.

Ice is the first to know when temperatures rise. About 85 to 90 percent of the glaciers on the Qinghai-Tibet Plateau, dubbed the world’s “third pole,” are melting. Professor Lai Yuanming with the Cold and Arid Regions Environmental and Engineering Research Institute, CAS, explains that Sanjiangyuan is special and is easily affected by natural changes. Climate change in recent years has posed a daunting challenge to the region.

Research performed by the Hydrogeology and Engineering Geology Institute of Qinghai Province shows that global warming has caused Sanjiangyuan’s glaciers to disappear, tundra to thaw and marshes and wetlands to shrink. In the short term, the water level of rivers and lakes will rise, but in the long term, the layout of Sanjiangyuan’s water bodies will change and water resources will dry up, which will lead to desertification and even death of inland rivers.

In 2011, the provincial government of Qinghai banned herding on moderately and seriously deteriorated grasslands. “Grass hasn’t grown as well as we expected,” says Wang Xiaofa, head of Grassland Office of Agriculture and Animal Husbandry Department of Qinghai Province. “We have to reconsider the measure.”

“When cows and sheep eat the grass, it stimulates growth,” explains researcher Wu Yuhu with Northwest Institute of Plateau Biology, CAS. “Grazing works with the grass. If grass from the previous year has not been eaten, it’s hard for new grass to grow because it’s covered by old grass, can’t get sun and just rots after rain. Moderate grazing helps the plant flourish and animal droppings enrich the soil.”

A total of 2.3 million livestock are being raised in Yushu Tibetan Autonomous Prefecture. Theoretically, the grasslands are not overloaded. Ecological problems cannot be blamed on herding alone, according to Tsering Gonpo, vice head of the prefecture of Yushu. Professor Zhang Xiaode with Chinese Academy of Governance believes across some 1,000 years of evolution, herders and livestock have integrated with the ecological system and coexist harmoniously. This is a distinctive characteristic of Sanjiangyuan: When the animals are suddenly removed, the imbalance results in ecological disorder.

“In addition to its ecological value, Sanjiangyuan is also rich in culture,” notes Liu Shurun, a renowned botanist and grassland ecologist. “Without cows and sheep, the millennium-old nomadic culture on the plateau would disappear too.”

To improve efficiency, the pilot park set up a special administration to integrate various former departments of land, environment, water conservancy, agriculture and animal husbandry. The park is divided into three parts: the Yangtze River, Yellow River and Lancang River zones, which each focus on different priorities.

The park also invites participation from people from all walks of life and places special attention on the interests of herders. “The park will not only protect the ecology but also utilize nature to improve local standards of living,” exclaims Li Xiaonan, director of Sanjiangyuan National Park Administration. “Along with the mountains, rivers, forests, lakes and animals, over 61,500 natives are also part of the park. They should be protected as well.”

Recently, the administration selected nearly 10,000 herders from poverty-stricken families to receive ecological training. They will receive a monthly salary from the government to patrol the park, enforce the law and monitor the ecology.

Moreover, the park will introduce satellite remote sensing and communication technologies to monitor the environment within four years. “The ecological map created by this system will be accurate up to 0.5 meters,” reveals Li. “The location and distribution of all people, animals and plants in the park can be tracked and the status of ecological system including glaciers, grasslands and wetlands can be monitored.” Data collected by the system will be used to drive local research and released to the public.