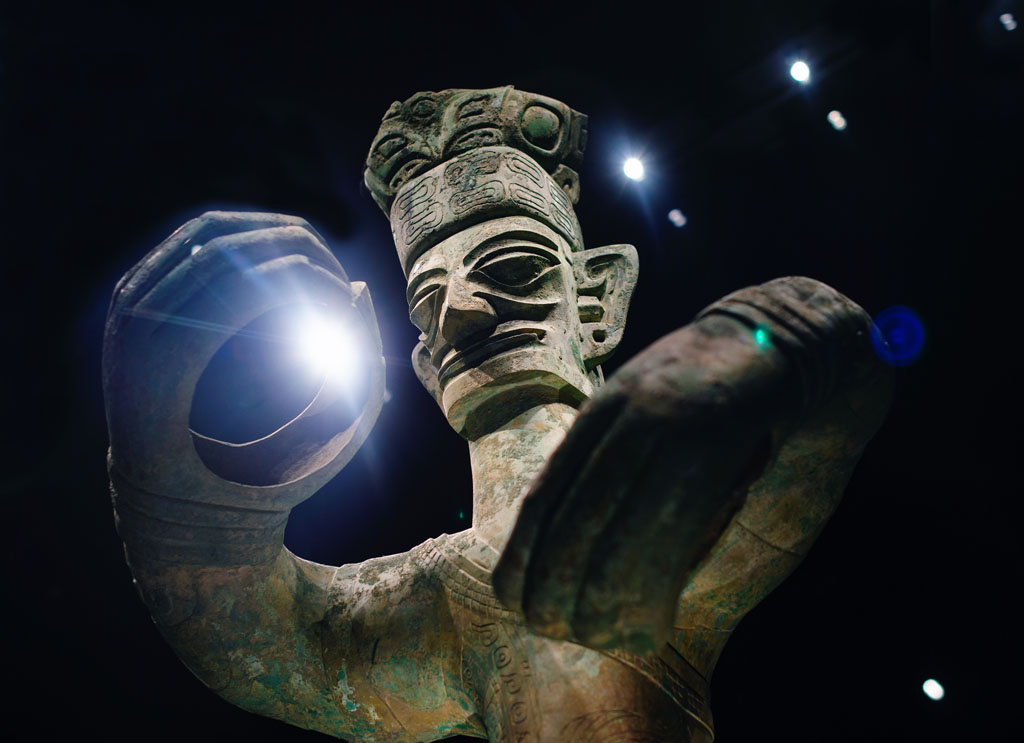 Sanxingdui: New Wonders of a Lost Civilization
Scan with wechat to share

On March 20, 2021, Sanxingdui shocked the world with the news that an excavation launched in November 2019 had located six pits filled with ancient bronze, whole elephant tusks, and other artifacts and materials. The news immediately created a huge sensation across China. It was the second time that the lost civilization at Sanxingdui produced wonders.

Sanxingdui is a small village on the Chengdu Plain situated in the western part of the Sichuan Basin in southwestern China. The Sichuan Basin features rich farmland sheltered by the topography. Since antiquity, the easy terrain, mild weather, and abundant water from the network of rivers running across the basin into the Yangtze River made the area rich in vegetation and hospitable to human settlement. However, the basin is surrounded on all sides by mountains and high plateaus, which presented daunting obstacles for human traffic. “The road to Shu is more difficult than the road ascending to the blue sky,” wrote poet Li Ba (701-762), using an ancient name for Sichuan. The land barriers cut the Sichuan Basin off from the outside world including the Yellow River valley to the north, home of China’s first two dynasties, the Shang (1600-1046 B.C.) and the Zhou (1046-256 B.C.). For hundreds of years, these powerful neighbors, whose material cultures largely define what the archaeologists call the Chinese Bronze Age, barely mentioned Sichuan in their writings. The people of the Sichuan Basin did not leave a written record at all. The combination of geographical isolation and lack of a written record shrouded the history of ancient Sichuan in obscurity, resulting in the common perception that Sichuan was the culturally backward countryside for most of the Bronze Age.

In the hot summer of 1986, the most extraordinary discovery in Chinese archaeological history happened at Sanxingdui with recovery of a highly developed civilization lost for more than 3,000 years. Two rectangular pits dug into the earth were accidentally found at Sanxingdui and then excavated by the local archaeologists, yielding an astonishing amount of wealth in the form of hundreds of bronze items alongside stone and jade implements, gold artifacts, and elephant tusks. All of them together weighed more than a metric ton. The most shocking finds were bronze sculptures ranging in size from miniature to monumental. They included human-like figures and heads, fantastic creatures, dragons, birds, and trees, the likes of which had never been seen before in Sichuan or anywhere else.

Most of the bronze pieces had signs of intentional breaking and burning before they were interred into the pits. Although the burial condition looks chaotic at the first glance, archaeologists were able to discern a clear order in which the objects were tossed into the pits in groups, with the elephant tusks last to be buried and thus first to be excavated. This phenomenon indicated that the contents in the two pits were the result of some kind of sacrificial activity motivated by local religious belief.

The sculptural tradition and iconography of the Sanxingdui bronzes contrast sharply with other ancient traditions in China, as does their burial condition. Moreover, conspicuous appearance of gold, a material rarely used elsewhere in China during the Bronze Age, also points to a strong local tradition.

In fact, before the bronze pieces were first discovered at Sanxingdui in 1986, ancient pottery pieces and jade and stone implements had been found in the area sporadically since the 1920s, luring generations of local archaeologists to occasionally survey and excavate various locations. Around the time the two pits were discovered in 1986, archaeologists found traces of an ancient wall which eventually helped them map out a large walled settlement. These finds proved that the site was home to a major civilization with previously unknown unique cultural and artistic tradition.

In contrast to the unique sculptures are several familiar bronze artifacts: vessels conventionally called zun and lei, which compare closely with counterparts from other regions of China. Many pottery and jade types have been familiar, too. Clearly, the Sanxingdui civilization was connected with other well-known cultural traditions of ancient China and was an active participant in a large network of cultural interaction. Archaeologists were able to date the two pits to just before and after 1200 B.C. and estimated that the settlement had an occupation history of at least 2,000 years from around 3000 B.C. to 1000 B.C., spanning both the Neolithic Period and the early Bronze Age. Research has shown that the casting technology responsible for the extraordinary bronze pieces was ultimately imported from the middle Yellow River region. And the Sanxingdui civilization was clearly capable of introducing goods from farther in distance beyond China, as suggested by a large quantity of cowrie shells that originated from the Indian Ocean.

Since 1986, Sichuan archaeologists have conducted more than 20 excavations, gradually gaining a better understanding of the civilization’s development and features, the most notable of which is a large-scale foundation, possibly for a palatial structure. On March 20, 2021, exciting news was announced that six more pits near the two 1986 pits had been discovered. Live telecasting of the excavation continued for several days, gripping the country.

Reports have specified that all the pits share the similar rectangular shape and cardinal orientation as the 1986 pits, with sizes ranging from 3.5 to 19 square meters. Some were larger and some smaller than the two earlier finds. Since excavation began in November 2019, more than 500 objects have been unearthed including fragments of gold masks, bird-shaped foils, bronze human heads with painted pupils, large bronze masks, fragments of bronze trees, about 170 whole elephant tusks, and a few decorated ivory ornaments, jade and stone implements, and what may have been scorched surfaces of architectural elements. Burning is also attested by the large volume of ashes.

The types of the objects and their burial condition were similar to that of the 1986 finds in many ways, which indicated that the six pits belonged to the same precinct of sacrificial activity and time period as the two earlier pits. The objects significantly bolstered the archaeological record. One of the most exciting new discoveries was traces of silk confirmed through lab analysis. Sichuan has traditionally been famous for its superb silk, and now its history can be traced back more than 3,000 years. A wooden box with traces of cinnabar and a wooden table were among the perishable materials recently discovered.

Among the bronze pieces excavated or partially uncovered thus far is a human figure carrying an actual-size bronze zun vessel on its head. A miniature model of the same scene was found in Pit No. 2 in 1986. It was very exciting to uncover the full-sized version after seeing a miniature so long ago. Some of the other uncovered bronze vessels are extraordinarily exquisite. An assemblage involving another human figure is also an intriguing image that has been partially exposed. A large human-like mask made of 85 percent gold has become the most recognizable icon of the present excavation.

The discovery of silk traces attests to the advanced state of archaeological fieldwork and scientific analysis in China. The excavation site is remarkable for its cutting-edge facilities. A large shelter was built over the area, inside which capsules with constant temperature and humidity control were built over individual pits to ensure the safety of the objects. Archaeologists wear protective clothes similar to those seen on healthcare workers during COVID-19 to avoid contaminating the soil in the pits. Such advanced conditions are the first in China as well as in the world. In contrast, the dig 35 years ago seems like primitive times.

Advanced Carbon-14 dating established a reliable time frame after analysis of 73 samples from the six pits. Pit No.4, for example, can be dated to 1199 to 1017 B.C., confirming the date range established for the 1986 pits by conventional analysis of artifact styles.

Sanxingdui, home to a lost civilization, has again proven its wealth of artifacts. Only time will tell if even greater wonders await. Cutting-edge archaeological work is leading to new insights and revelations. Archaeology is constantly expanding horizons as science tends to do.

The author is director of the Asian Art Museum of San Francisco, and a fellow of the American Academy of Arts and Sciences.