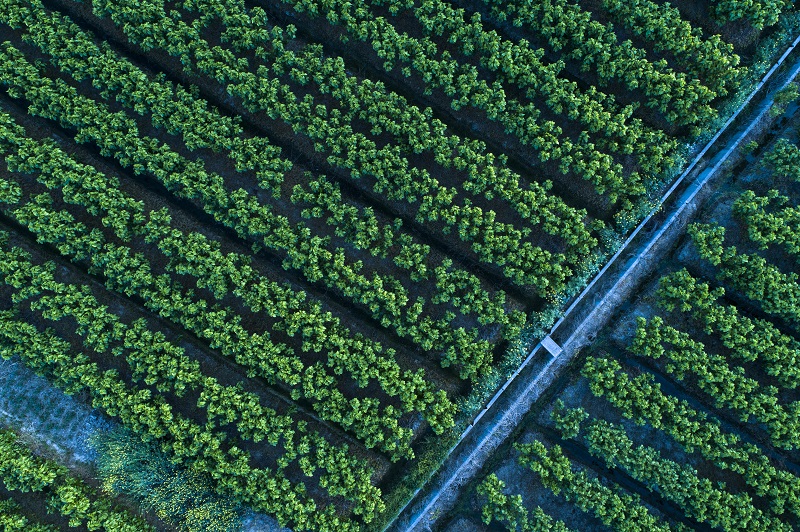 A bird’s-eye view of mulberry fields in Zhenze Town. The Taihu Lake Basin, considered the cradle of China’s sericulture, has accumulated centuries of skills on growing mulberries and raising silkworms.

Vast and beautiful Taihu Lake is the third-largest freshwater lake in China and the source of many surrounding rivers.
Nourished by water, the areas around the lake boast plentiful wetlands and rich biodiversity as well as unique lifestyles and splendid traditional culture.
Since ancient times, the people on this land have been living intimately with the water and using their wisdom and hands to gradually develop fertile land abounding in fish, rice, and silk, an effort culminating in today’s economic circle around Taihu Lake.

Zhenze Town in Wujiang District of Suzhou in eastern China’s Jiangsu Province is a highlight of the Taihu Lake economic circle boasting thousands of years of history and a reputation as the “hometown of silk.” Along the winding rivers through the town flow countless stories.
Viewed from above, Zhenze looks like a mulberry leaf floating on the lake. The Book of History, one of the “five classics” of Confucianism, noted that three big rivers (Songjiang, Qiantang, and Puyang) converged into “Zhenze,” the ancient name of Taihu Lake. The town was named after the lake.
In remote antiquity, the area of Zhenze was covered by a series of shallow lagoons, which gradually evolved into a land as the sediment overflowed. On this land created and nurtured by water, Zhenze enjoys favorable conditions of pleasant climate and fertile soil along the coast of Taihu Lake.
Thousands of years ago, local residents planted mulberry trees and raised silkworms to produce silk, forming a tradition that every household had been engaged in sericulture.

An ancient scroll painting of Zhenze’s water system shows dense river channels crisscrossing and connecting with one another and various bridges all over the town.
More than a century ago, silk merchants from Zhenze used the canals running through the town to transport the best-quality
local silk to big foreign trade firms in Shanghai, where it was then exported to the world, which contributed to the prosperity of a river-based “Silk Road.”
In 1921, Bi Kanghou, a representative Zhenze silk merchant, set off from the Ditang River, the mother river of the town, to participate in the International Silk Exposition in the United States. The silk product made in Zhenze won the gold medal, which led to the local silk being renowned around the world.

Over time, Zhenze has woven a hub with more than 100 silk enterprises and won the reputation as “China’s home of silk quilts” boasting a complete industrial chain including mulberry farming, silkworm breeding, cocoon reeling, silk weaving, and quilting.
Alongside the robust development of the silk industry, the ancient town is now radiating with new vitality through leveraging the combined charm of silk, history, and waterscapes and seeking new development integrating agriculture, culture, and tourism.
This photo album focuses on stories of the ancient town and its water with vivid images from the perspectives of natural environment, characteristic farming, traditional lifestyles, and ecological restoration.
Through the photographer’s lens, ordinary water gains a different taste and splendor thanks to the long historical context and slow-paced life of the ancient town. Water is the origins, supporting resources, and lifeblood of the “silk town.”
This book is divided into two volumes. The first volume starts with the natural environment of the ancient water town, capturing the beauty of wetlands in Zhenze as well as the diverse creatures living there. It also recounts touching stories of close connections between people and nature through personal experiences in the sericulture industry and interactions with producers of local delicacies and intangible cultural heritage.