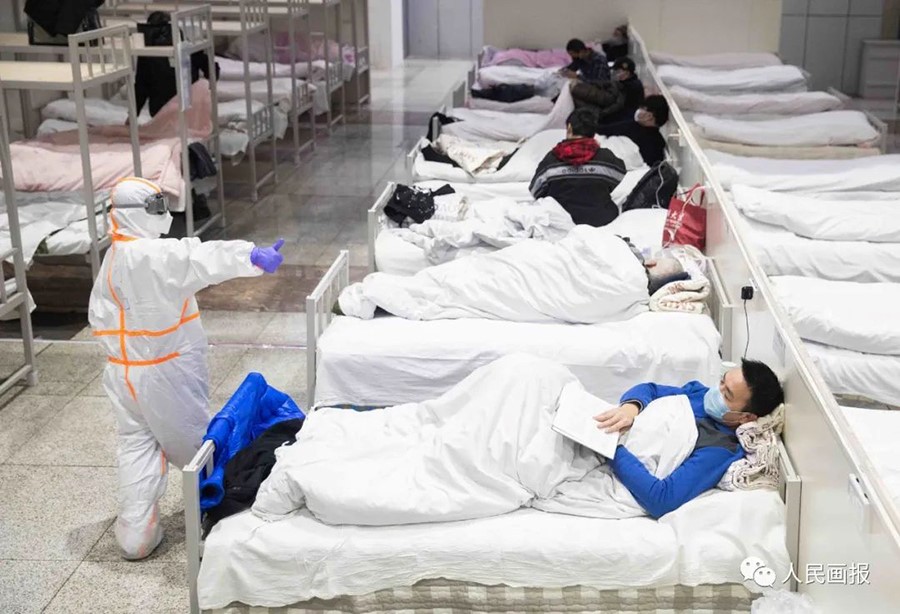 February 5, 2020: In the evening, a patient is reading a book in the temporary treatment center at Wuhan International Conference and Exhibition Center. A passing nurse gives him a thumbs-up. by Ke Hao

As of June 28, 2020, global COVID-19 cases had topped 10 million. Mankind is facing the most serious global public health crisis since the end of World War II.

Against this backdrop, the whole world now shares weal and woe. Photographers across continents are using their cameras to record disordered life and extraordinary moments during the pandemic.

On June 29, 2020, “Zooming in on COVID-19: Unforgettable Moments in the Global Fight Against the Pandemic,” the first online photography exhibition in the world dedicated to the global fight against COVID-19, opened in Beijing.

Scan to Enter the Virtual Gallery

Capturing the valuable moments beyond the limits of time and space, the online exhibition presents 200 works of more than 100 photographers from 27 countries. They revealed the emotions demonstrated by individuals and society as a whole amid the crisis. As photographers, they are not only the witnesses, but recorders of the pandemic. Confronting life and death amid the epidemic, what do they want to express through the disordered and extraordinary moments captured in their frames?

Snapping more than 42,000 medical team members in addition to millions of Wuhan citizens, what we leave behind is not the curiosity of a bystander, but the in-depth record and reflection of a witness.

Confronting the COVID-19 pandemic, I felt fear for the first time in my career as a journalist. This is not a fear of the loss of life, but a fear for the prospects of the economy. To fully express this invisible psychological dread, I did my best to take satisfactory pictures. Fortunately, South Korea’s economy is recovering rapidly. I hope that in the future we will not face this horror again. But for the moment that has happened, I will keep its relevant memories in photos.

In this special period, I seek not just a picture with perfect composition of harmonious light and shade. I have always hoped to be able to use photography to capture the sparkling human nature of the era. I have also wished to record calmly, but was often touched by the people and their stories. Even images may not be able to describe sorrow and strength during the disaster, but I always hope that when I click the shutter, I am preserving a memory of the battle against the pandemic.

Through the camera, I suddenly noticed two medical staffers, sitting and leaning against each other, like statues. At that moment, mixed emotions and excitement washed through me: it was joy, heartache and indescribable feelings – they were finally able to have a little rest. All the thrills, all the struggles, all the exhaustion they had experienced in the past month led to this moment of cuddling at dawn. It seemed as if time stopped altogether for the two of them. Through the window behind them, the sunshine was breaking in.

Each era has its own heroes. Tens of thousands of medical workers whose faces who are not visible behind masks are fighting against the coronavirus in Russia and around the world. They are the heroes of our time.

Every human being seems so vulnerable when they are confronted with the epidemic, but the strength from the spirit encourages us to face the danger and difficulties bravely. We cannot escape the difficulties of reality, so instead we face them positively. The heroes in harm’s way have not only healed our bodies, but also gave us the courage and motivation to continue to pursue a better life.

The unique living conditions in the epidemic forced me to improve my photography skills. My eyes are now focusing on scenes that will never be seen again, such as the empty streets of Barcelona, or tourist hotspots where people are reappearing. Taking every photo is a new learning process. This crisis forced me to develop my abilities faster than ever before.

When our homes became shelters, looking outside became a gaze into an uncertain future. Finding appreciation for so many things we took for granted has been true happiness. Through a camera I can feel the silence of the street and the absence of people—a sort of temporal suspension.

For some reason, I’m obsessed with Lima. On the way home, I often turn to other streets, walk around and record the sight with my camera. At first, I felt great. But as time went on, the streets, empty and desolate, began to convey grief, especially at night.

I’ve seen with my own eyes the frightening scenes that haunted my mind for days and couldn’t calm down for a long time. This may have something to do with the fact that most of my family members were susceptible to the coronavirus, and at that time, little was known about it.

Walking into the streets of Wuhan and the lives of local people, I can see that the city is gradually returning to normal life. Every individual and family I saw in the city is a microcosm of Wuhan’s all-out war against the epidemic.

I was worried when the COVID-19 epidemic hit. Back then, we were not ready to face it. The government had no choice but to limit the flow of people and suspend industrial production. After several weeks of shutdown, Toyota plants were some of the first to restart production. I was present to witness it all.

As a press photographer of La Jornada, I was honored for the chance to capture the stories of different groups during the COVID-19 outbreak. One group was the medical staffers, who not only need to take care of patients, but also need to soothe families who are anxious to hear from them. I also recorded another group of people who had to walk out of their homes to earn bread for their families. The epidemic has taught us one thing: we need to be more compassionate with others. We can understand why some people have to leave their houses while others are lucky enough to work at home. The disease caught the world by surprise, but we are slowly learning how to deal with it. This exhibition is part of our drive to deliver global anti-epidemic action with cameras.

“Zooming in on COVID-19: Unforgettable Moments in the Global Fight Against the Pandemic”

Standing Together Through Thick and Thin