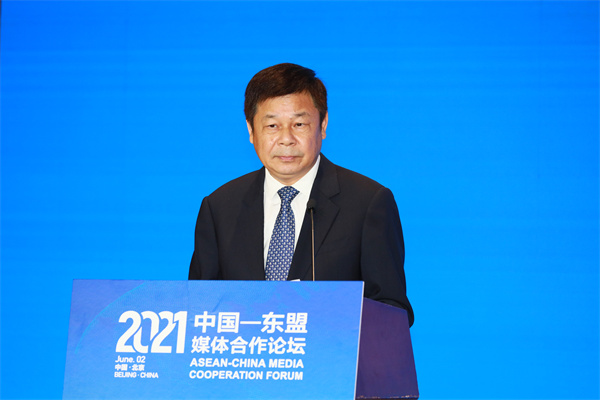 To mark the 30th anniversary of China-ASEAN dialogue relations and the China-ASEAN Year of Sustainable Development Cooperation, the 2021 ASEAN-China Media Cooperation Forum was held in Beijing on June 2 under the theme "Thirty Years On: A New Chapter for ASEAN-China Win-Win Cooperation."

The forum was guided by the State Council Information Office (SCIO) and the Ministry of Foreign Affairs of the People's Republic of China, co-sponsored by China International Publishing Group (CIPG) and the ASEAN-China Centre (ACC), and organized by China Report Press.

In-person attendees included Indonesian Ambassador to China Djauhari Oratmangun, Malaysian Ambassador to China Raja Nushirwan Z. A., Vietnamese Ambassador to China Pham Sao Mai, Liu Chunxiang, deputy director-general of the International Liaison Bureau of SCIO, Fang Hong, deputy director-general of the Asian Affairs Department of the Ministry of Foreign Affairs of China, Chen Shi, deputy editor-in-chief of CIPG and president of China Report Press, and Guo Jinshi, director of the Information Office of Gansu Provincial Government. They were joined by nearly a hundred representatives from media and think tanks at the venue in Beijing.

Tang Heng, deputy secretary-general of the Publicity Department of the CPC Central Committee, stated that with increased cultural and people-to-people exchanges between China and ASEAN, media cooperation between the two sides has been constantly promoted at multiple levels, through multiple channels, and in diverse forms. It is hoped that the media of both sides will continue to help policy synergy, gather consensus from all sides, advocate pragmatic cooperation, convey confidence and positive energy, focus on sustainable development, and consolidate the public opinion foundation for friendly cooperation, so as to create a favorable public opinion environment for the development of China-ASEAN cooperation.

Kung Phoak, deputy secretary-general of ASEAN, said that despite the impact of the COVID-19 pandemic, the partnership between ASEAN and China remains strong and vibrant. He stressed that this year is significant for both sides as 2021 marks the ASEAN-China Year of Sustainable Development Cooperation, which will provide fresh momentum to bilateral strategic partnership. The pandemic has led to a surge in internet traffic, bringing more opportunities for media cooperation, especially in the area of new media. Strengthening media cooperation will help the two sides make new and greater progress in the future.

Khamphao Ernthavanh, Lao Ambassador to China, noted that ASEAN and Chinese media, as the main communication channels and sources of information for both sides, have played an important role in social, economic, cultural, public health, livelihood and other aspects. The media should leverage the existing effective mechanisms to contribute to writing a new chapter of economic development of ASEAN and China, especially the post-pandemic cooperation, she opined.

Jusan Vincent L. Arcena, assistant secretary of Presidential Communication Operations Office of the Philippines, remarked that strengthening media cooperation is in the common interest of both sides and conducive to peace, common prosperity, stability, and development in the region. Despite difficulties in economic and trade cooperation due to COVID-19, he said, the two sides are using technology as much as possible to promote the new normal, share new initiatives, and explore new modes of cooperation, which will strengthen two-way economic cooperation between ASEAN and China, promote common interests, and enhance regional peace and stability.

ACC Secretary General Chen Dehai remarked that the new round of technological revolution and industrial transformation is profoundly changing the way people live and work, endowing the media industry with new connotation of the times and more room for development, and putting forward new and higher requirements for content creation and communication methods in the media sector. He expressed hope that media from both sides will tell more amazing stories about China-ASEAN win-win cooperation, promote policy communication and strategic alignment, and further deepen and expand media cooperation.

Representatives from Chinese and ASEAN media also participated in sessions of the forum themed "New Prospects for Regional Economic and Trade Cooperation under the RCEP" and "New Media Trends in the New Technological Revolution," during which they discussed hot issues, looked to the future, and shared suggestions for sustainable development of China-ASEAN media cooperation.

On the sidelines of the forum, Yu Yunquan, president of the Academy of Contemporary China and World Studies, released the bilingual book Keywords to Understand China: Foreign Affairs in the New Era (Chinese-English). Chinese and ASEAN guests also visited the photo exhibition "Mogao Caves Meet Angkor Wat" prior to the opening ceremony.