A New Day for Red Movies and TV 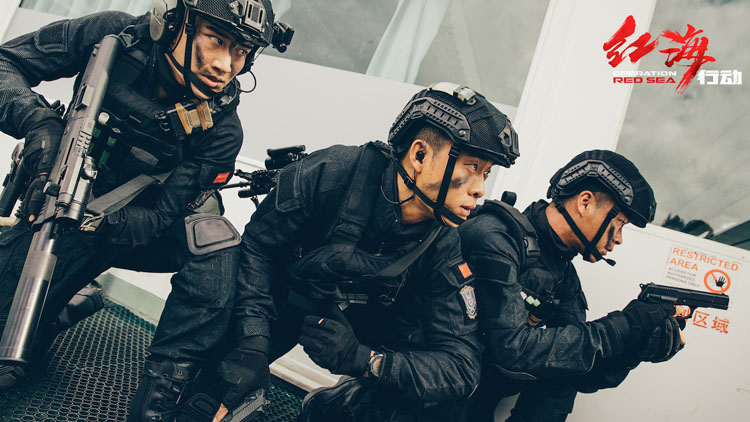 A still from Operation Red Sea. The film tells the story of the Chinese Navy’s elite special force, Jiaolong Assault Team, who save Chinese and foreign nationals from an African country at war and foil a terrorist plot to obtain nuclear materials to make dirty bombs. courtesy of Douban Movie

Before the founding of the People’s Republic of China (PRC) in 1949, it was hard to find a film screening outside large cities such as Shanghai and Beijing. But the eight major film studios established in Beijing, Shanghai, and other places around 1949 laid a solid foundation for the film industry to grow in China. Eventually, film distribution companies were paired with administrations at all levels across China until every corner of the country was covered. Grassroots film projection teams ventured into the most remote areas to give locals the chance to see a film, thus widening access to cinema across China.

In 1959, the film Five Golden Flowers was produced and released by Changchun Film Studio on the 10th anniversary of the founding of the PRC. The production sought to depict the life changes of ethnic minorities across a 10-year period after the founding of New China. Ah Peng from the Bai ethnic group falls in love at first sight with Jin Hua (a common Chinese female name) on Sanyue Street in Dali City, Yunnan Province. The next year, Ah Peng travels across the Cangshan Mountain and around Erhai Lake in search of Jin Hua. After finding several other girls with the same name, Ah Peng finally locates the girl he looks for, and they fall in love. The comedy got rid of crude gimmicks. Employing a relatively simple technique, it emphasized the delicate personalities and mental activities of the characters. And superb cinematography captured the stunning sunrise and sunset, green mountains, and clear waters of Cangshan Mountain and Erhai Lake. The film was broadly popular and screened in 46 countries, a record for Chinese films going abroad at that time. In 1960, at the Second Asian-African Film Festival in Cairo, Egypt, the film’s director Wang Jiayi won the Silver Eagle Award for Best Director.

However, red films are not produced only for such occasions. Red movies and TV series have managed to reach out more broadly in recent years. And the process of marketization and industrialization of Chinese cinema has pushed red movies to move forward significantly.

From the 1980s to the 1990s, the official modes of developing, shooting, producing, and distributing red films, including relatively conservative narrative structures, began to fade. In 1989, to celebrate the 40th anniversary of the founding of the PRC, the film The Birth of New China was released. The film adopted documentary techniques to trace the history spanning from the CPC’s victories in three major battles against the Kuomintang to the founding ceremony of the PRC in Beijing on October 1, 1949. The film combined historical facts with profound interpretations of history thanks to creative editors and cinematographers. A series of red films and TV series including The Birth of New China explored marketization and industrialization of the film industry in many ways, resulting in more diverse narratives of the history of Chinese revolution. In the 1990s, a wave of excellent films with artistic appeal emerged in China, such as Red River Valley (1996) about the Tibetan people’s struggles against British invaders in the early 20th century and The Long March (1996) depicting the strategic transfer of the Red Army in the 1930s.

And red movies and TV series including A Dream of Youth (a 2007 miniseries depicting a group of outstanding young people including Mao Zedong) and Beginning of the Great Revival (a 2011 movie set in the period from the Revolution of 1911 to the First National Congress of the CPC in 1921) were more market-oriented and industrialized than in the past. They also began to embrace Hollywood elements more boldly. Although every movie is different, many have attempted to localize existing Hollywood movie genres. Notable successful films that embraced marketization and industrialization and were rewarded with handsome box office returns include Operation Mekong, a 2016 film based on a real incident in which five Chinese sailors were killed and depicting a Chinese anti-drug task operating in the Golden Triangle area, and The Wandering Earth, a 2016 sci-fi epic adapted from Liu Cixin’s novel of the same name. The film is set in 2075: The sun is about to diminish, making the solar system no longer viable to support life. In such desperation, mankind launches the “Wandering Earth” project as an attempt to propel the earth out of the solar system to a new habitable home.

This year marks the 100th anniversary of the founding of the CPC. A hundred years ago, when China was poor and weak, various projections of revolution and evolution circulated. The founding of the CPC turned the page on a new chapter of China’s self-salvation. The TV series Awakening Age was released in February this year to great acclaim. The series follows key figures in the critical period after the collapse of China’s last feudal dynasty, the Qing Dynasty (1644-1911), and shifts in ideology from the 1910s to the 1920s—the early phase of the spread of Marxism in China. Instead of boring preaching, the series is all about “thoughts and life.” “Alongside key revolutionary moments, it depicted the everyday lives and personalities of famous historical figures.” Founders of the CPC, represented by Chen Duxiu, dared to challenge authority and propel the evolution of Chinese culture and public awareness. The film was rated 9.3 points out of 10 on the Chinese film and TV review platform Douban, and proved popular with the younger generation of viewers.

The majority of Chinese cinema audience is youth aged 18 to 29 who grew up with the internet. They are the major consumers in broader cultural and entertainment sectors such as games and movies, including red films. Their recognition of the mainstream of ethics flavoring red films and TV series evidences the genre’s breakthroughs and innovation, which has enjoyed comprehensive improvement in authenticity, depth of thought, and artistry.

The author is an associate research fellow at the Chinese National Academy of Arts.