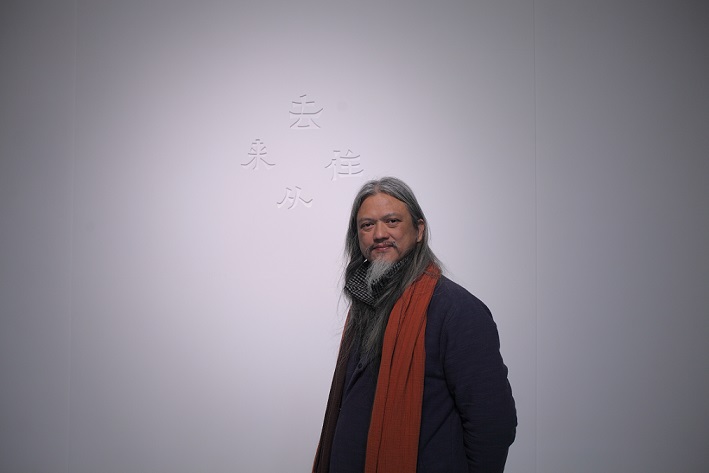 He Yong, a sculptor with the Shanghai Oil Painting & Sculpture Institute, works as the curator and project sponsor of the third exhibition of “An Odyssey between Past and Present.”

In January 2021, the third exhibition of “An Odyssey between Past and Present” kicked off at the art museum of the Shanghai Oil Painting & Sculpture Institute. I am honored to be the curator. With the theme of “sculptural intension and calligraphic extension,” the exhibition invited established experts in sculpture, calligraphy and seal cutting as well as some young artists as participants.

This exhibition was a novel attempt. The definition of “calligraphy” I refer to here covers Chinese ideographs, handwriting, and seal cutting. This was the first time we exhibited works of sculpture and calligraphy, two forms of art greatly contrasting with each other in their background and form, side by side for interaction and comparative studies.

Why to put together these two strikingly different forms of art in the same exhibition? To answer the question, we need to go back to the name of the exhibition, “An Odyssey between Past and Present.” “Odyssey” means a long wandering or voyage usually marked by notable experiences and hardships. Thus, I believe the exhibition could go beyond just an art exhibition or an academic activity, but rather an exploration trying to face and solve problems of the two forms of art. The exhibition traversed time and space, showcased the trend of contemporary Chinese art, and served as a journey to search and experience the traditional Chinese spiritual world.

The discussions on the relationship between traditional Chinese culture and its core spirit, as well as the relationship between traditional Chinese culture and its evolution in modern times, are nothing new. However, when we place the discussions in today’s circumstances against a new backdrop, they have new premises and are supposed to address different issues. Compared with brilliant ancient Chinese sculpture, modern and contemporary Chinese sculpture art started in the turbulent years of the early 20th century, when Western culture and learning were introduced into China. Now, after more than a century of development, modern and contemporary Chinese sculpture has not separated itself from the core of Chinese culture. In the realm of sculpture, there is no end of the discussion of traditional culture and the current zeitgeist as it relates to sculpture. However, in a time when modern Western civilization remains dominant in the world as a result of historical development, the studies of traditional Chinese culture and art as well as their modern evolution have yet to achieve systematic results and built-in mechanisms, despite unremitting efforts over several generations.

The discussion on “an odyssey between past and present” is based on the need for Chinese sculpture’s own development, and the demands of Chinese ideographs in modern times. Chinese calligraphic art boasts a time-honored history and profound culture, exhibits a complete set of world views and values, and carries the powerful cultural genes of the Chinese nation. At the same time, contemporary Chinese sculpture has always been based on Western sculpture. How to connect the ideas, cultures, and histories behind the two in order to reshape contemporary Chinese sculpture is a question open for academic discussion.

Although sculpture and calligraphy are two different fields, the integration of arts has offered expanded artistic possibilities. Sculptors and calligraphers who only focus on their respective fields may run out of inspiration. At this time, stimulation from other art forms can help artists with their creative endeavors.

At present, whether from the perspective of Western theory or the angle of traditional Chinese thinking, both Chinese calligraphy and sculpture need to address the problems we are facing today and undertake the task of rebuilding themselves. The ultimate goal of doing this must be achieved through a deeper understanding of and in-depth studies on Chinese culture, history, thought, and life philosophy, as well as a thorough knowledge of ancient and modern China and the Western world. What we talk about here is not only about the building of art and culture in the new era, but also about our society and our everyday lives.