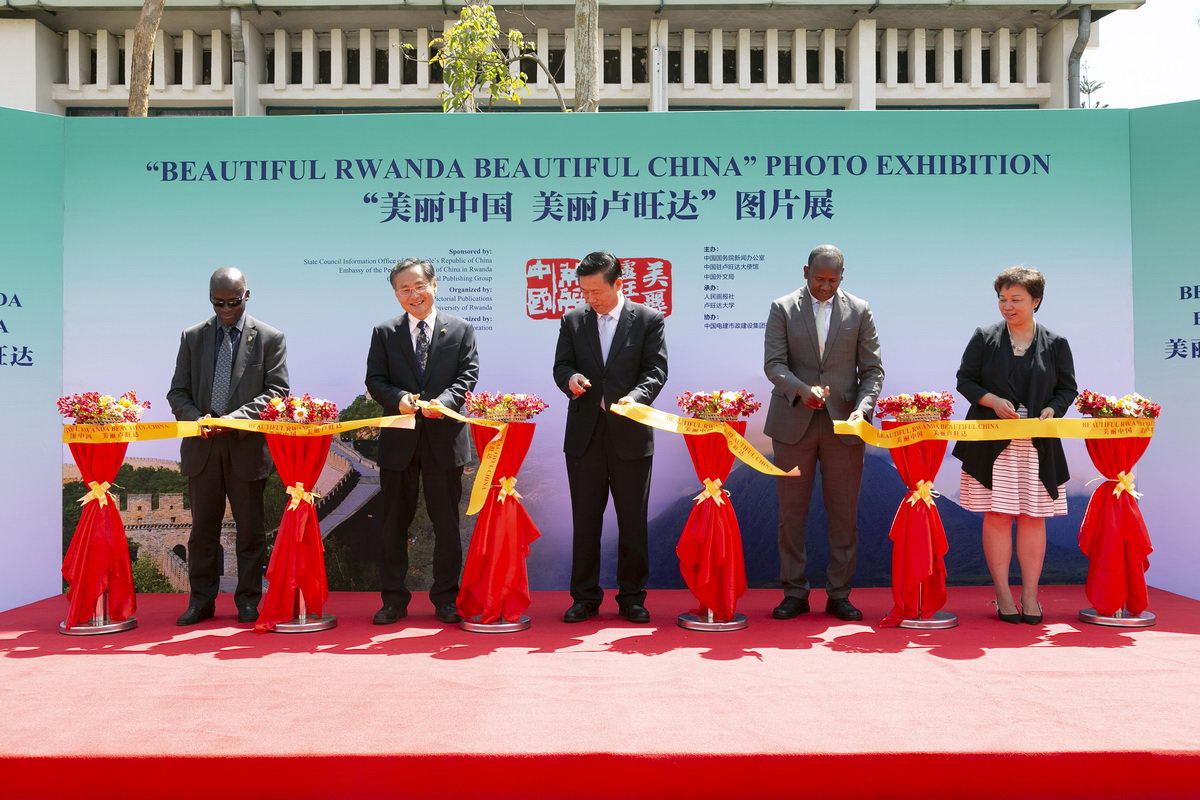 On July 6, 2018, the opening ceremony of the “Beautiful Rwanda, Beautiful China” Photo Exhibition, jointly sponsored by the State Council Information Office of China, the Chinese Embassy in Rwanda, and China International Publishing Group (CIPG), organized by China Pictorial Publications and the University of Rwanda and co-organized STECOL Corporation, was held at the University of Rwanda in Kigali, capital of Rwanda.

Themed “Beautiful Rwanda, Beautiful China,” the exhibition displayed over 80 images of picturesque landscapes and cultural customs of the two countries as well as fruitful achievements of China-Rwanda friendship and China-Africa cooperation.

In his address at the opening ceremony, Guo Weimin, vice minister of the State Council Information Office of China, noted that since the two countries established diplomatic ties, based on mutual understanding and sincere cooperation, China and Rwanda have increasingly strengthened political trust, economic cooperation and cultural exchange. He pointed out that although Rwanda and China are far from each other, Rwanda has traditionally been friendly to China. Since the establishment of diplomatic ties 47 years ago, the two countries have been committed to sincerity, friendliness, treating each other as equals and respecting each other’s choice of development path. Both countries understand and accommodate each other’s core interests and major concerns, and the bilateral relations have enjoyed steady development.

“We gather here for the ‘Beautiful Rwanda, Beautiful China’ Photo Exhibition,” Mr. Guo added. “It is hoped that this photo exhibition will help audience from both countries to experience the beauty of Rwanda and China as well as their long history, review the traditional friendship between the two countries, and look ahead into new chapters of bilateral cooperation.”

Mr. John Ntigengwa, permanent secretary of the Ministry of Sports and Culture of the Republic of Rwanda, said in his speech at the opening ceremony, “it is an honor for me on behalf of the Hon. Minister of Sports and Culture, to be here this morning to celebrate yet another milestone in the China-Rwanda relations.This photo exhibition comes at a time when our bilateral ties are getting stronger and especially in sharing our cultural friendship. A word of appreciation goes to the organizers of this photo exhibition themed ‘Beautiful Rwanda, Beautiful China’ through which I believe visitors will come to see and enjoy some of the similarities of our two nations. It is my hope that everyone will very much enjoy this exhibition and experience the beauty of Rwanda and the beauty of China.”

Chinese ambassador to Rwanda Rao Hongwei pointed out that China-Rwanda cooperation and development are facing unprecedented historic opportunity. The China-proposed Belt and Road Initiative is injecting vitality into the connectivity and coordinated development of African countries. The Initiative has won enthusiastic acclaim from Rwandans of all walks of life. China and Rwanda are eternal friends that share happiness and sadness. China supports Rwandan people actively exploring a development path fit for the country’s national conditions. China is excited to work together with Rwanda to build a community with a shared future for humanity featuring mutual respect and win-win cooperation. The “Beautiful Rwanda, Beautiful China” Photo Exhibition is just one vivid example of China-Rwanda friendship.

“In recent years, increasing numbers of Chinese and Rwandan youngsters have visited each other’s country. More and more Rwandan students have chosen to study in China,” said Ambassador Rao Hongwei. “Meanwhile, institutions like the Confucius Institutes are introducing traditional Chinese culture and art to Rwandan people.”

Distinguished guests from the State Council Information Office of China, CIPG, the Ministry of Sports and Culture of the Republic of Rwanda, the University of Rwanda, Chinese enterprises in Rwanda and other organizations attended the opening ceremony of the photo exhibition. The opening ceremony was presided over by Ms. Li Xia, editor-in-chief of China Pictorial Publications under CIPG.

A press agency dedicated to introducing China to foreign countries through books, magazines and websites, CIPG is the country’s oldest and largest professional international communication organization. It was founded under the sincere care and direct leadership of proletarian revolutionaries of the older generation such as Mao Zedong, Zhou Enlai and Chen Yi. Its predecessor was the International Press Bureau of the General Press Administration of the Central People’s Government of China established in October 1949. Currently, CIPG oversees 20 subsidiaries including seven publishing houses, five magazines, China.org.cn, China International Book Trading Corporation, Center for International Communication Studies and Center of China Aptitude Test for Translators and Interpreters. Moreover, it manages 22 overseas branches located in 14 countries and regions including the United States, Canada, Britain, Germany, France, Belgium, Russia, Egypt, South Africa, Mexico, Peru, Turkey, Japan and Hong Kong. CIPG has formed a conglomerate covering translation, publishing, printing, circulation, internet and multimedia services, theoretical research and social projects. Each year, it publishes more than 5,000 books in over 40 languages and periodicals in over 30 languages that circulate in more than 180 countries and regions and operates more than 30 multilingual websites that attract internet users from around the world.