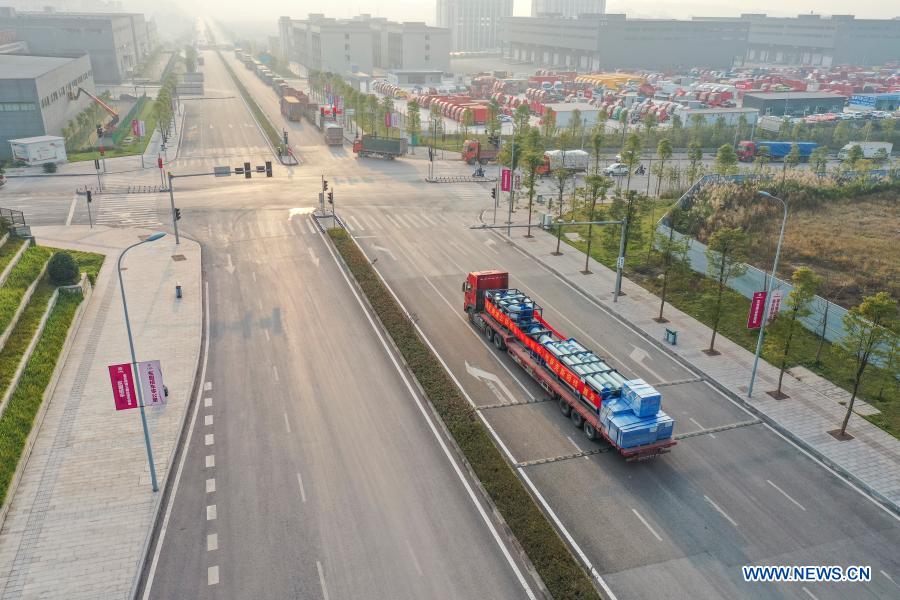 Aerial photo taken on Nov. 17, 2020 shows a cross-border highway regular lorry for Kazakhstan leaving the Nanpeng Highway Bonded Logistics Center in southwest China's Chongqing Municipality. The logistics center sent its first cross-border highway regular lorry for Kazakhstan on Tuesday. To date, several road freight transportation routes, including Chongqing-Singapore, Chongqing-Myanmar, and Chongqing-Vietnam services, have been made available. Cargos with a total worth of 1.158 billion yuan (about 176 million U.S. dollars) have been delivered through these highway lorries so far this year. (Xinhua/Huang Wei)

Thanks to its reform and opening up after 1978, China has become an economic powerhouse and a diplomatic giant. The nation has targeted development of agriculture, industry, science and technology, and defense as the instrument to transform the country’s economic and strategic structure and make China a leading global player in the international system.

Indeed, measures to “open up” China to foreign investment and international trade have proved central to its development which now appears spectacularly successful.

Over the past 40 years, China’s gross domestic production (GDP) has grown at an annual average of around 9.5 percent and totaled about 99.1 trillion yuan (about US$14.89 trillion) in 2019, the largest GDP in the world based on Purchasing Power Parity (PPP). The per capita GDP of China reached US$10,276, surpassing the 10,000-dollar mark for the first time. Its foreign trade has increasingly expanded and surpassed that of the United States in 2012. Over 960,000 foreign-invested enterprises had been set up in China by the end of 2018, with accumulated foreign direct investment exceeding US$2.1 trillion.

Chinese President Xi Jinping called the country’s reform and opening up the “great new revolution” in the third volume of Xi Jinping: The Governance of China. China has lifted more than 700 million rural residents out of poverty over the past 40 years. In Xi’s view, reforms towards “openness” were indispensable instruments to make “socialism with Chinese characteristics” possible andbuild Chinainto a “great modern socialist country.”

The Chinese nation has been feeling out its place in the international order. China has played a critical role in strategic forums such as the United Nations Security Council, Shanghai Cooperation Organization, BRICS, G20, and APEC and now leads the construction of new global financial architecture represented by the Asian Infrastructure Investment Bank (AIIB) and the New Development Bank. It seeks peaceful diplomacy based on a broad agenda of manifold interests and is making endeavors to this end as a key contributor to the stability of global political and economic order. Furthermore, China maintains strong cultural ties with countries across continents, especially through Confucius Institutes.

China has shown confidence in its future and its model’s power to further national development. In stark contrast to increased protectionism and unilateralism advocacy globally, the Chinese have sought greater participation in the most important international institutions to promote globalization and further liberalization of trade based on their own successful experience with “openness.” And through the Belt and Road Initiative, which promotes construction of integrated infrastructure in Eurasia and broad maritime connections across the Indian Ocean and the Red Sea, China has been investing heavily in openness through win-win cooperation that produces benefits for all. China is building a global community with a shared future without forgetting common responsibilities and security alongside prosperity.

The world is witnessing China’s peaceful development, which has benefited the world greatly and continues to do so in forms such as wider prosperity, better global governance, and reinforced multilateralism.

The author is a researcher at the Brazilian Naval War College and the Global South Institute and a Ph.D. candidate at the Federal University of Rio de Janeiro.