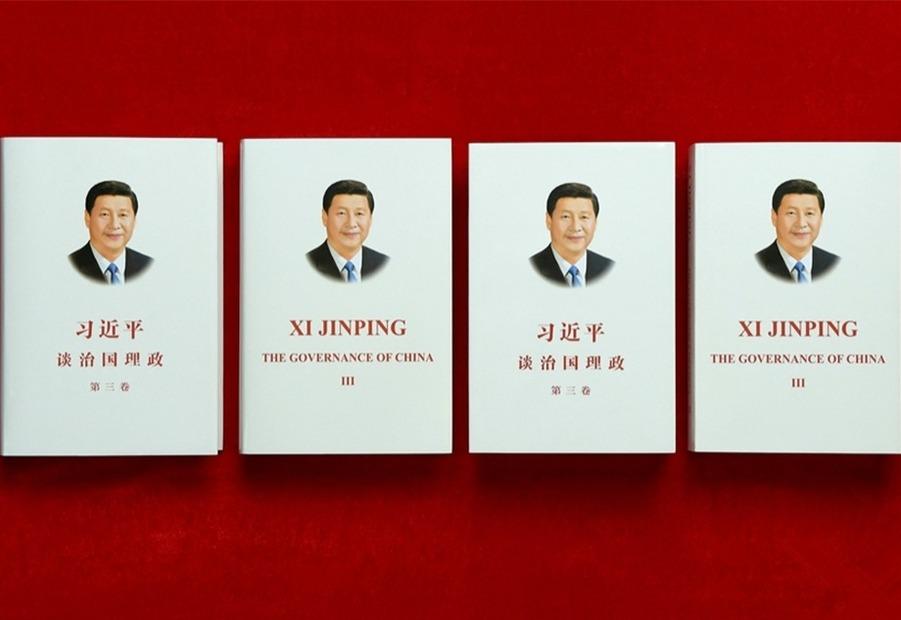 In order to conduct a comprehensive study on China, it will need to study books and information published from both abroad and within. so that one can conclude the facts that are reflecting the most possible truth. Thus I always try to pursue a comprehensive and balanced approach when I study about developments of China.

Per kind favour of my Chinese friends, I have received a copy of The Governance of China (Volume III) by Xi Jinping, the president of the PRC. I myself had involved in translation of his previous two volumes.

The reason for translating those books is that-since president Xi happens to be the most responsible person in China, his books of compiling his speeches are reflecting the stands and objectives of the country in various sectors including politics, economy, defense and foreign relations. Thus, scholars can study and guess through these books: what are the positions of China in specific issues, what is it doing and what will it do in the future.

This book has 20 chapters and more than 600 pages. The very first chapter is the report to the 19th National Congress of the Communist Party of China submitted by Party General Secretary Xi Jinping, which is the largest and most important part of the book with more than 80 pages. This report evaluated the outcome of past five years’ works and highlighted next five-year programs. And it is found in next chapters that he has been implementing and saying in accordance with these guidelines. I would say the report is the main script and what described in next chapters are practical acts. It might be a bit difficult to understand for ordinary readers because of rather complicated political terms but for the veteran scholars the essence can be clearly comprehended.

In politics and governance, the ideology of Socialism with Chinese Characteristics for a New Era is assumed to be held steadfastly, while implementing policies may be flexible in line with changing situations. Nevertheless, strong leadership of the CPC would be persistently developed. Regarding governance, capacity of government agencies in new era would be enhanced in order to gain public support by fulfilling their desires.

In defense and security sector, while the PLA is well under the political guidance of the CPC, it is encouraged to build modern military command system and defense modernization with momentum. That is assumed to be a countermeasure against growing military activities under American Indo-Pacific strategy during Trump administration period.

Regarding reform and opening up, the current momentum will be continued to accelerate despite whatever problems occur on the way. An interesting thing is that the economic development model will be transformed into a technology-based one and urban centered development communities will be established geographically. Generally, it is understood that well developed industrial urban areas of the Pacific coast will lead adjacent cities to further development by grouping city clusters.

In social and cultural sector, priorities have been made on the rule of law, human rights, promotion of Chinese national character, media development and public relations in cyber age and political education for younger generation. It may be an effort to strengthen defending power in cultural and public relations fronts.

With regard to Hongkong, Macao and foreign relations sector, it is obvious that the determination of two SARs to ever be indivisible parts of the mainland is strongly anchored. That determination is deepened by an arrangement of organizing both SARs into larger part of Bay Area Development Zone including Shanghai and Shenzhen from Chinese mainland.

In diplomatic relations, China will take the role of a “major country” inferring the equal power relationship in strategic level. Still, Xi’s words of “shared future for mankind” is expected to be the beacon for relations with other nations. China may take a leading role in terms of global economic and trade within the BRICS group of emerging economies. With developing countries, more Asian and African countries under the priority consideration of China may be seen in the links of the BRI expansion.

Eminent point in CPC affairs would be the internal party reform. It is interesting that how a party of proletariats will reform itself to cope with a new era as a leading party of newly rich and powerful nation. The usual maladies of corruption, abuse of power and red-tape bureaucracy might be the priority targets to be tackled seriously when a country is achieving power and prosperity.

To wind up, this book depicts limited duration between 2017 and 2019. But it reflects crucial events for the major turning point to build a developed global power in 2050, which is the national goal of China. It changed development model, conducted military modernization, expanded foreign relations, and solidified internal unity. Now China is marching well on the track of a major power.

However, there will be challenges and problems ahead in its way. The wounds of 2019-2020 trade war in Trump era, the effects of COVID-19 have to be treated properly. Business cannot reach normalcy as long as the market is not stable due to the pandemic although China can control it very well. Besides, there will still be strategic rivalry in other means between US and China under the new US administration and it will be interesting to observe what will be seen in the future.

U Ko Ko Hlaing, Co-founder of the Center for Strategic and International Studies, Myanmar

This article is reposted from China Report.