China beefs up action against novel coronavirus as cases increase 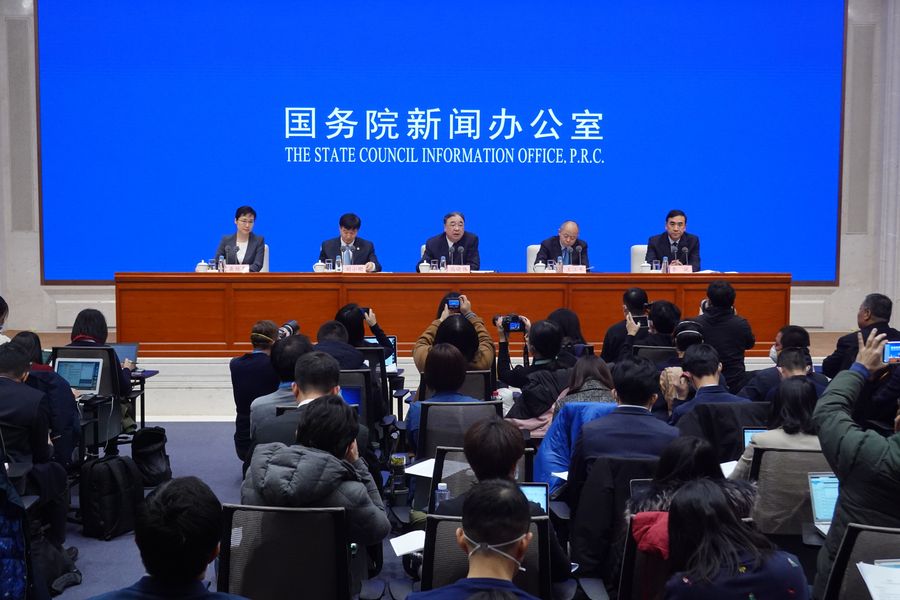 A press conference on the prevention and control of the novel coronavirus outbreak is held by the State Council Information Office in Beijing, capital of China, on Jan. 26, 2020. (Xinhua/Cai Yang)

WUHAN, Jan. 26 (Xinhua) -- Doctors and nurses rush to Wuhan, the center of the novel coronavirus (2019-nCoV) outbreak. Medical materials are also on their way to this city. Despite the Spring Festival holiday, factories race against time to produce the needed masks and protective clothing.

China is beefing up nationwide action to contain the new pneumonia epidemic as 30 provincial-level regions reporting cases of novel coronavirus had all activated first-level public health emergency response mechanism as of Saturday.

A meeting of the Communist Party of China leadership on Saturday demanded all-out efforts to treat infected patients, speed up the augmentation of medical personnel and coordinate civilian and military medical resources.

More than half a million medical staff have joined the epidemic prevention, control and treatment of patients in Hubei, said Li Tao, an official with the Hubei Provincial Health Commission.

Meanwhile, five medical teams with a combined number of 686 doctors and nurses dispatched by Shanghai, Guangdong, Hunan, Sichuan and Zhejiang, have joined the treatment efforts in Hubei, the provincial commission said.

China will send an additional 12 teams of more than 1,600 medical staff to areas hit hard by the novel coronavirus outbreak in Hubei Province, Ma Xiaowei, director of the National Health Commission, said at a press conference on Sunday.

"We have also brought a large number of medical treatment materials. We believe our participation will add to the medical force and increase the confidence to overcome the epidemic," said Zhang Mingming, a member of the Shanghai medical team at the Wuhan Jinyintan Hospital.

"I have no doubt that with all the concerted efforts from across the country, we will contain the epidemic situation," said Song Liqiang, 50, deputy head of the Xijing Hospital's Respiratory and ICU Department in Xi'an, capital of Shaanxi Province. Song has experience working in the ICU during the SARS outbreak in 2003.

By the end of Saturday, the province reported 1,052 cumulative confirmed cases of pneumonia, with 52 deaths and 129 cases in severe condition.

Experts say the geographical distribution of Wuhan's infection cases which were first reported in late December, indicated a close relationship between the epidemic and a local seafood market.

"We've mobilized all the workers left in Wuhan to work in shifts to ensure round-the-clock construction," said Zhang Chongxi, general manager of the road and bridge company of Wuhan Construction.

Zhu Tingxuan, a nurse at the Renmin Hospital of Wuhan University, volunteered to join the battle when her hospital issued a notice of recruitment on Jan. 7. With a sense of mission, she began to work in shifts at the Wuhan Jinyintan Hospital the next day.

"I am very lucky that I do not sweat easily. Some colleagues took off their protective clothing after work, and they were completely soaked with sweat," the girl in her 20s said.

On Saturday, she was replaced by a new batch of colleagues so that she could get some rest. "But if needed, I will surely return. I feel obligated to help the sick and share the pressure of my colleagues," she added.

On Saturday, 13 provincial-level regions, including Xinjiang, Qinghai, Gansu, Henan and Shandong, joined 17 others to activate first-level public health emergency response to the epidemic situation, with government employees in the health sector canceling their Spring Festival holiday and returning to their posts.

Beijing's Badaling Great Wall tourist site closed temporarily on Saturday. Temple fairs and other large-scale gatherings celebrating the Spring Festival were also canceled. Shanghai Disney Resort has temporarily closed due to the epidemic. Many other tourist spots and museums nationwide have closed for the time being.

Beijing's education authorities said Sunday kindergartens, primary, middle schools and universities in the city will postpone the opening of the spring semester.

The China Development Bank, one of the country's major policy banks, offered emergency loans worth 2 billion yuan (about 288.3 million U.S. dollars) Friday to Wuhan for prevention and control of the novel coronavirus.

The country's finance ministry Thursday allocated 1 billion yuan to support Hubei's battle against the disease. Over 2 million masks and related products are set to be provided for Wuhan, according to the Ministry of Commerce.

As of Saturday, Hubei has allocated 1.03 billion yuan to guarantee the rescue and treatment of the patients.

"Many of our employees have volunteered to postpone their Spring Festival vacation and the factory is running at full capacity," said He Zhenhua, general manager of a protective products factory in Wuhan.

Ten plants in Guangdong Province have resumed production of masks.

In an unprecedented move on Jan. 23, all of Wuhan's public transportation, including city buses, subways, ferries and long-distance coaches as well as outbound channels at airports and railway stations, were suspended to contain the spread of the virus. Other Hubei cities such as Jingzhou, Huanggang, Ezhou, Xiaogan and Yichang also imposed transport restrictions.

Measures have also been taken in rural areas nationwide to prevent the disease. Many citizens canceled their trips home. In some regions, visiting relatives, a tradition of the Spring Festival, is not encouraged this year. Large banquets for weddings were canceled or postponed.