China: Offering Something for Everyone 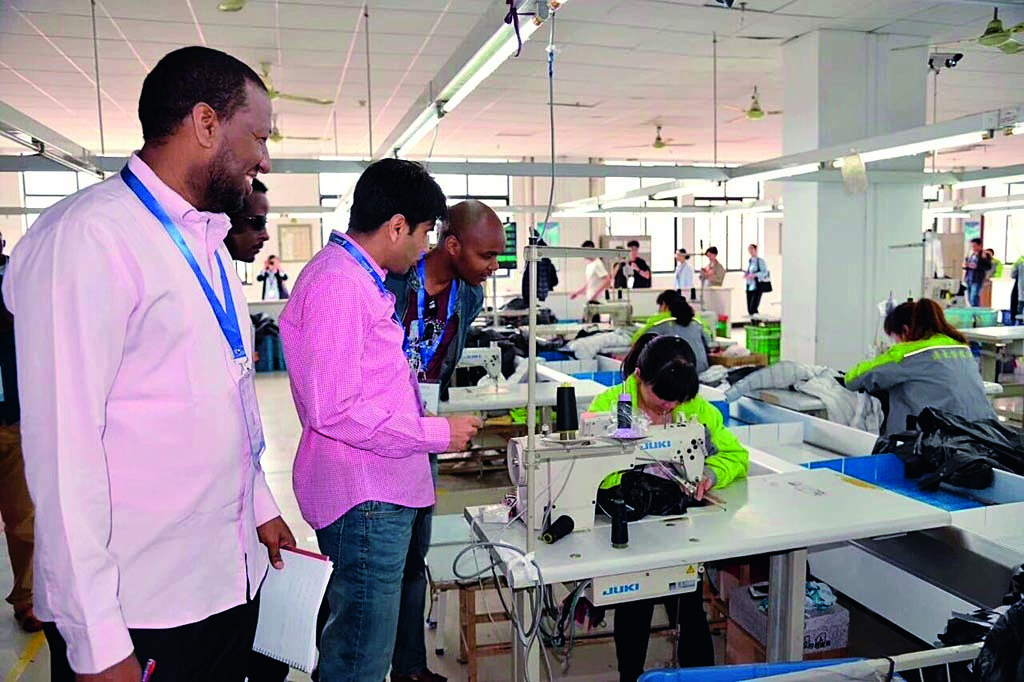 May 8, 2019: Students from the Emerging Markets Institute (EMI) of Beijing Normal University visit a garment factory in Jiaxing, Zhejiang Province.  by Li Pengpeng

China: Offering Something for Everyone
Scan with wechat to share

“Jiaxing is a good place for us to see what China is doing and how far China has gone,” declared Samuel Korsah, a student from Ghana enrolled at the Emerging Markets Institute (EMI) of Beijing Normal University.

Situated in China’s prosperous Yangtze River Delta, the city of Jiaxing in Zhejiang Province is among the most developed areas in China. It recently welcomed 53 students from 31 developing countries to witness some of the drivers behind China’s development as part of a field study of an international MBA program of the EMI.

It has been five years since the EMI began enrolling international MBA students from developing countries. With renowned politicians and economists from around the world delivering in-depth lectures on subjects such as governance, economics and management as well as field trips and strict schedules, the international MBA program has produced hundreds of excellent graduates. “The program is designed to cultivate students who can play a lead role upon returning to their home countries,” said Hu Biliang, dean of the EMI.

The trip to Jiaxing was only a snapshot of the things EMI students have learned and seen in China. After spending 10 months in China, they have all developed unique opinions about China and how the country’s experience might provide clues for the development of their own countries.

China’s efforts in forestry and horticulture won praise from those students. “It surprised me to discover that this area (Jiaxing) is more beautiful than Beijing,” revealed Samuel Korsah, who supports planting more trees to prevent the environment from further degrading. Citing the ongoing International Horticultural Exhibition in Beijing, he noted that China has attached great importance to planting trees to improve the environment. As climate change has become a major challenge of our times, “China is looking for ways and means to control it.”

“China’s cashless payments are already beyond my imagination,” exclaimed Bagus Abimanyu from Indonesia. He also paid special attention to China’s infrastructure. “I haven’t been to western and rural areas of China, but in the eastern and coastal places I have visited, all the infrastructure has been well-developed, not only bridges and roads, but also schools and universities.”

Instead of going back home after graduation, Abimanyu wants to stay in China to work for a few years. “China has a giant economy and most of the world’s leading companies have branches in China,” he explained. “I want to get experience and knowledge that I cannot get in my country.”

“The Chinese are really hard-working people,” opined Abimanyu. Many EMI students were impressed by the diligence of Chinese people.

Deng Mareng Akuei Ajou from South Sudan found admiration for Chinese culture. “Chinese people are respectful,” he stated. “And once you respect each other you can do many things together. I will take back the modesty of the Chinese people to my country.” He also praised the patience of Chinese people, saying that they seldom rush to do things. “When I went to a bank in China, I was amazed that so many people were waiting in line without making noise.”

“China now feels like my second home,” he beamed. “Even after I return to my home country upon graduation, I’ll return to China often. I also welcome more Chinese people to visit my country.”

Students from the EMI are also finding the Belt and Road Initiative creating opportunities in their home countries.

Shonelle Nadia Clement worked for the Ministry of Education of Grenada before coming to China. She thinks her country should learn from China in secondary school education. She is especially concerned about the agriculture of her country, which contributes a major share of the world’s nutmeg production. But the industry is vulnerable to constant natural disasters such as cyclones due to the country’s geographical location. She hopes the Belt and Road Initiative will help her country introduce cutting-edge technologies to make its agricultural industry more resistant to natural disasters.

Abdelmoneim Ahmed Abdelwhab Mohmmed used to work for the Central Bank of Sudan. He welcomes Chinese enterprises to invest and set up factories in his country as the Belt and Road Initiative is implemented. “We have natural resources and China has capital,” he declared.

He said that the affordable labor and abundant raw materials make Sudan an ideal place for Chinese companies as they face rising domestic costs and tariffs on exports. “Sudan borders several African countries. We have free trade agreements with our neighbors. When Chinese companies produce something in Sudan, the products will have a big market.”

Bounnam Chittanavong hopes that the Belt and Road Initiative would help transform his country, Laos, “from a landlocked country to a land-linked country.” In this regard, the most important project between China and Laos under the Belt and Road Initiative is a high-speed railway that will stretch from the border of China and Laos to the Laotian capital.

“The project will create considerable benefits for both countries,” he predicted. “Infrastructure on Laos’ side is very poor and because of our many mountains, it is very difficult to travel even from my hometown in the north to the capital city. When the railway is finished, Chinese products can more easily be transported to Laos. The project is also important for Laos to further open up to China and other bordering countries. And the improved infrastructure will attract more investment and tourists to Laos.”