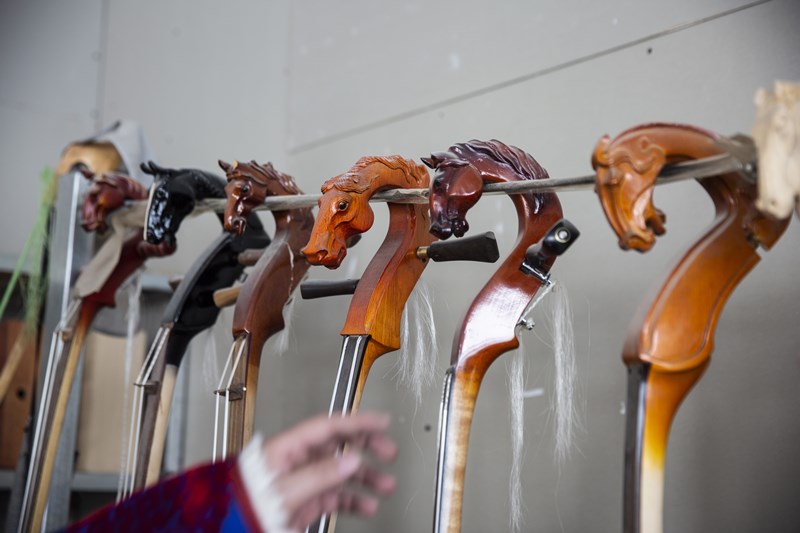 Heads of matouqin with different styles. Thon Ruge shared that observing the dynamic moments of real horses can bring inspiration to the creation of matouqin.

Chahar Right Rear Banner is a unique administrative division of Ulanqab City in northern China’s Inner Mongolia Autonomous Region, equivalent to a county. This May, many of its people were busy with spring farming and agricultural production. Employees of Chagan Aobao Ethnic Arts and Crafts Production Company were right there with them.

Some workers set up yurts in front of the company. A matouqin (a kind of bowed stringed instrument with a scroll carved like a horse’s head), some Mongolian traditional furniture, and other handcraft commodities were displayed on the front desk. Technicians trimmed timber and polished furniture in the workshop.

“The company was founded out of nowhere at what happened to be the perfect time,” beamed Thon Ruge, founder and technical consultant of the company established two years ago.

Lifting Hometown Out of Poverty

Thon Ruge is a native of Chahar Right Rear Banner, where most locals were engaged in livestock husbandry and corn planting. However, he has been enthusiastic about painting since childhood. After graduating from the Fine Arts Department of Ulanqab Teachers College in 2001, he embarked on a completely different path from his ancestors.

In 2013, the banner invested in an ethnic cultural industry street covering more than 4,000 square meters. The same year, Thon Ruge was granted a free space in the street by the local government to produce matouqin. Then, he started his own business.

“Making a good matouqin requires specific materials and high-level carving skills to complete the horse head so it captures the unique vigor and strength of Mongolian horses,” Thon Ruge noted. Because of his excellent craftsmanship, Tong gradually gained some fame over the years.

“The local government has given us a lot of support,” Thon explained. “In the first two years, the village invested 1.3 million yuan (about US$182,000) in our company. We used this funding to purchase equipment and expand the plant, which increased our company’s turnover to more than 300,000 yuan (about US$42,000). We plan to pay off the government funding in installments over three years. We have already begun dispersing a dividend of 150,000 yuan (about US$21,000) to help poverty-stricken households in the village.”

To further help eliminate poverty, the company recruits poverty-stricken villagers directly. “In the first year, we hired seven poor villagers and paid them an average annual wage of 6,500 yuan (about US$912) to lift a whole family out of poverty by employing one person,” he added.

Thanks to their fame and experience after years of hard entrepreneurial work, in early 2019, Thon Ruge and two of his colleagues were respectively named the inheritor of Mongolian ethnic furniture, matouqin, and Mongolian yurt production by Chahar Right Rear Banner, as noted on the sixth batch of banner-level intangible cultural heritage protection projects and inheritors list.

“Our company has good sales numbers on matouqin, yurts and ethnic furniture,” he noted, with eyes on the future. “This year, we want to establish an ethnic craft training base and a cultural research base in Ulanqab, which will be completed by June. And we plan to do training and provide accommodations in yurts. In this way, students can get a more intimate experience with Mongolian culture, and we will better integrate traditional culture with modern industry.”

His plan earned support from the local government. “When the two projects were proposed, the government was very supportive and provided 200,000 yuan (about US$28,063) as a subsidy,” he said. “After the bases are completed, poverty-stricken villagers, unemployed people, and young herders can learn a skill here to help them earn more income.”

“This is also a platform for the inheritance and development of intangible cultural heritage,” he beamed. “I hope it will bring more income to villagers, and improve the living environment and cultural atmosphere of the whole village.”