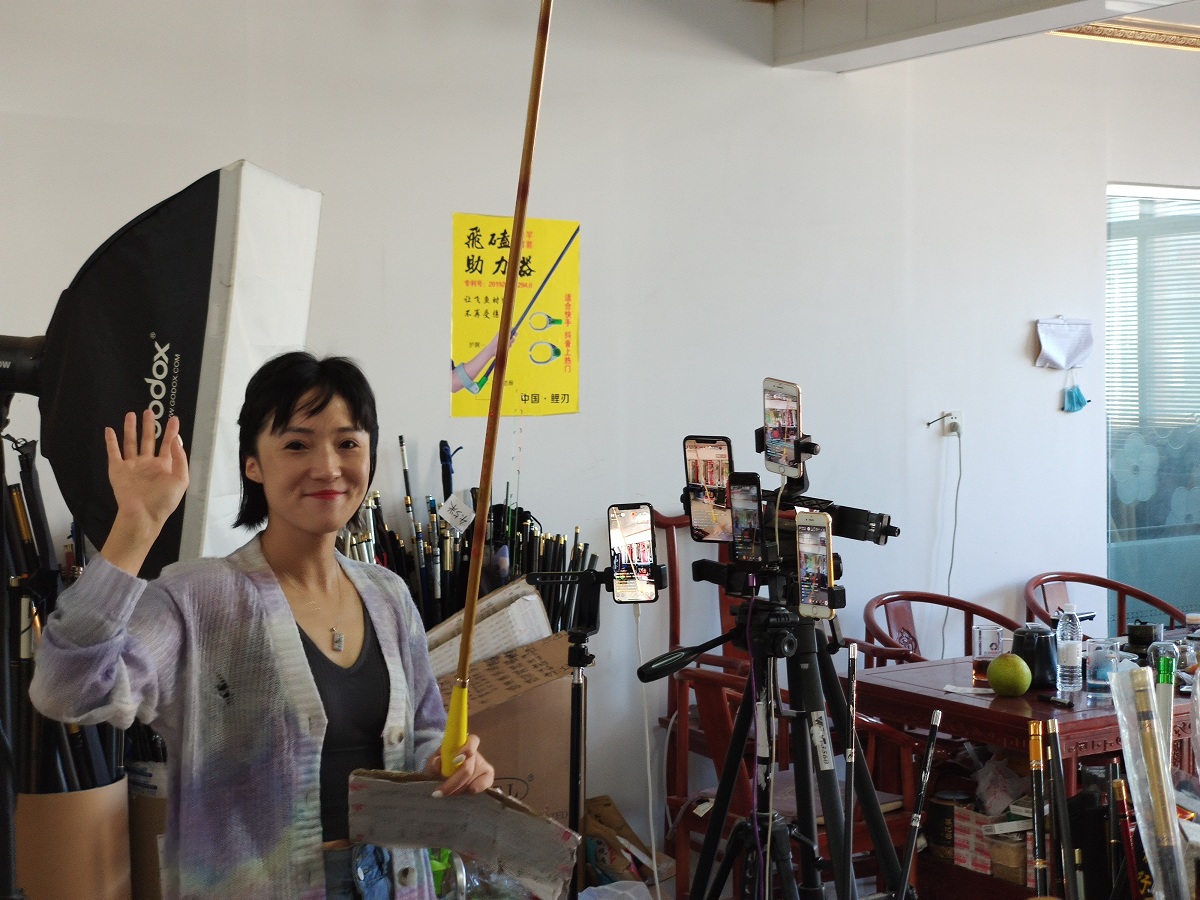 The livestreaming setup in Chen Lei’s workshop in Suning County. Each mobile phone shares the livestream to a different e-commerce platform.

In Suning County, Hebei Province, near Beijing, e-commerce is driving economic development that lays the foundation for cultural progress. Suning County has been an agricultural area for centuries. Modern consumer economies require farmers to transition to wage-earning jobs, but these are in cities far away, and so it separates wage earners from their families for months and even years. E-commerce puts the logistics in place to allow for more distributed opportunities and save people from having to crowd into cities.

When people move away from the countryside for wage labor in cities, they are dislocated from family relationships and real human connections with their neighbors. “Culture” isn’t just what you go to experience at the ballet; it’s what people develop within their families and neighborhoods. Developments in Suning County show modern economics and community preservation working together. It’s not charity coming in from the outside;it’s locals building themselves up, using their own strength and creativity. They receive assistance from the outside in the form of loans and training, but they are the ones who ultimately make it work.

Cities bring businesses and potential customers together. They have done this for millennia. Chen Lei,Party secretary of Xiqianbo village in Suning County, has been one of the people who migrated to cities for opportunities. He spent more than 10 years in Beijing, working in various capacities. In 1997, he returned to his village to start various enterprises, and in 2012 he turned to e-commerce to sell fishing poles. When the turn to e-commerce came, Chen had already built up business experience and skill. In 2014 he was elected the village’s Party secretary, and so his focus broadened to helping others around him, not just running his own businesses.

Education and training have been key to Chen’s efforts in encouraging e-commerce. His neighbors previously sought to gather wealth through saving, but he has encouraged them to invest and open small businesses. Chen invited experts from Alibaba to come to the village to train locals how to do business online. The advent of e-commerce and the current trend of livestreaming have made markets across China more accessible to local businesses of Suning County. In 2016, Xiqianbo was named a “Taobao Village” due to the progress of its e-commerce ventures.

Another effort Chen showed off was the cultivation of pears. For Suning County, they do not need to send out for agricultural laborers. They themselves are farmers. Changing from growing staple crops to cash crops is a smaller adjustment for farmers than moving away to work in factories. At home, they are the boss; in a factory, their bosses are only managers for owners who may not even be on the same continent. E-commerce allows farmers direct access to China’s national market, allowing them to sell their fruit and vegetables at a premium and not just the grocery prices they would receive, taking their fruit into cities to sell onroadsides.

Efforts like those of Chen allow farmers to make smaller adjustments to their lives but still meet the demands of a modern consumption economy. A further dimension that Chen revealed was the support that e-commerce provides to farmers seeking business development loans. Farmers can take crops from the countryside to cities and make a good profit, but there are no papers to prove their good business sense. E-commerce helps record transaction history based on what village entrepreneurs have already accomplished, which can be taken to the bank as evidence to support loan applications if they need.

Culture grows when people are in charge of their own lives and they know it. None of what was discussed in this article was really cultural, but economic development decisions are human decisions. “Market forces” are not the authority that tells people how to live. People like Chen Lei who have attained prosperity outside of their home villages can come back and help their neighbors bridge the transition from farming to consumer economy-supporting small business operations. Small business owners work hard because they know that success or failure lies with them. They support local development because they are personally and financially invested in where they live. With a bed of support like that, culture can grow.

Most people don’t want to take over the world; they just want to have control over their little corner of it. Culture is a thing that grows slowly when people have the space to be themselves: literally, when they’re not crammed by necessity into urban high-rises; figuratively, when they are not forced to go wherever the jobs are. E-commerce lets small businesses communicate with potential customers, and modern logistics takes delivery out of the hands of small-time operators, allowing them to focus on what they do best. Culture demands people who can receive it, carry it, and transmit it. In Suning County, the ground is being prepared for culture to thrive.