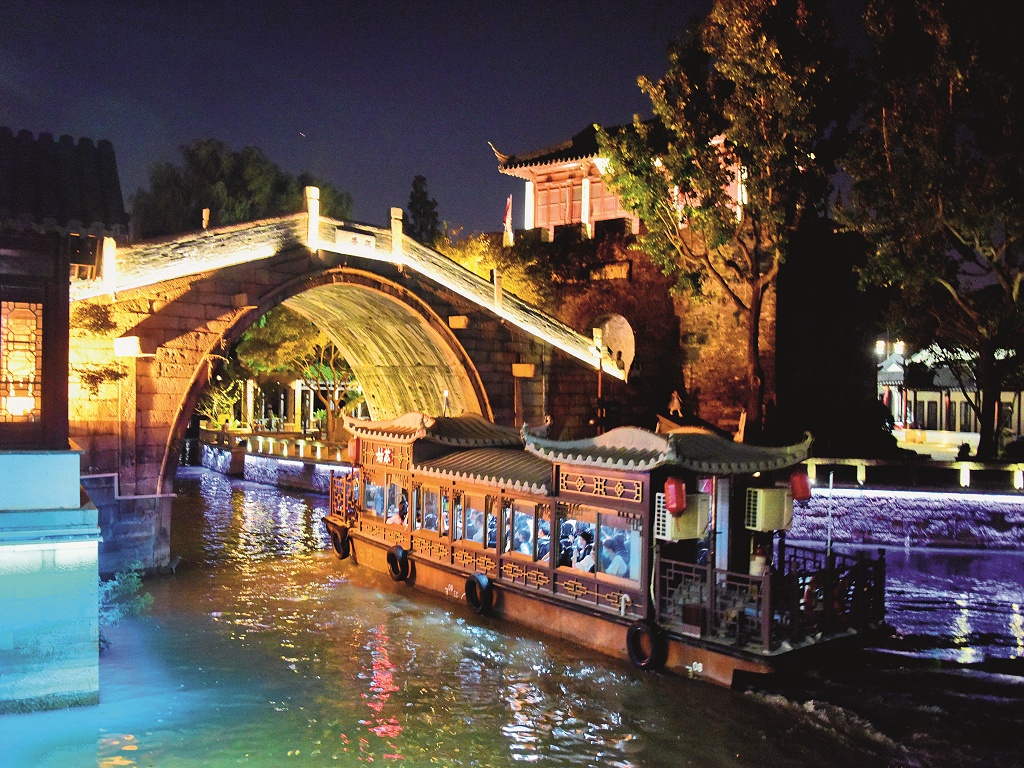 A night boat tour around the Feng Qiao scenic spot in Suzhou, Jiangsu Province, where the poem Night Mooring by Maple Bridge was written. VCG

As neither a speaker nor writer of Chinese, I might seem like a surprising candidate to occasionally translate Chinese poetry. My explanation? Chinese is completely different from English in structure. Reading Chinese certainly helps you appreciate the beauty of Chinese poetry, but I’m not sure it helps translation. You need to know the words poets use, understand the intended meaning, and find a way to deploy the best words possible to communicate the meaning while retaining the sense of poetry…

In a book about the city of Suzhou, I was working on a section on Hanshan Temple. Among the reasons for its fame is that the temple is the setting of one of China’s best-known poems– Feng Qiao Ye Bo (Night Mooring by Maple Bridge) by poet Zhang Ji of the Tang Dynasty (618-907). I decided to produce an English version for the poem, which you can read at the end of this article.

The first line writes itself because it translates almost directly. It is beautifully evocative – even a non-Chinese speaker gets the sense of the poem in its original form from these two metaphorical images and one event. The only question to be answered was “Wu” should be translated as “Crow” or “Raven.” On the face of it, crow was the better choice. “Wu” on its own should probably be translated as “Crow.” “Raven” has different characters. But I chose “Raven” for the image. The crow is a coarse and common scavenger; the raven an altogether grander bird. What would you call a beautiful woman with black hair? Crow-haired? Never! So…

“The Moon falls, a raven calls, frost fills the sky…”

In the second line, I could not find any way of fitting in the references to both “Feng” and “Jiang” or thinking of anything that came close to scanning. I couldn’t abandon “Feng” as it is integral to the title of the poem, so “Jiang” had to go. “Maple boughs” sounds nicer than “Maple trees” or “Maple Bridge.” In the book version it’s “Maple boughs and a fisherman’s lamp,” but I’ve now taken out the word “and.” The two images are not logically connected, and a comma slows the line down and creates a slightly better sense of random associations of thoughts on the part of the melancholy scholar.

“Maple boughs, a fisherman’s lamp; sleepless in sorrow I lie…”

“Outside the Gusu City wall” pretty much writes itself. With the second half of the line, there is a decision to be made. Should it be “Cold Mountain Temple” or “Hanshan Temple?” “Gusu” is the Chinese word and the ancient name of Suzhou City, so for balance “Hanshan,” the Chinese word and the name of the monk who founded the temple, should be too. How great a word is “knell!” For a start, it rhymes with “bells.” And it works as a noun or a verb, so it gave me options. Best of all, it’s the right word. “Peal” is the wrong word. Carillons of bells peal on happy occasions. “Knelling” is a much more melancholic word.

“Outside the Gusu City wall, from Hanshan Temple knells…”

Moving on to the last line, I made it a barge rather than a boat for scansion –“barge’s” gave me two syllables – and also because to navigate the canal, the scholar’s craft would surely have had a shallow draft and little or no keel – what we would call a barge rather than a boat. The last decision I had to make was “bell” or “bells.” “Bells” is obviously a perfect rhyme. But I was pretty sure that there would have been only one bell at Hanshan Temple. After all, after the Japanese intrusion, wasn’t the temple left with none? Which would have resonated more with my melancholy scholar – the chiming of a peal of bells, or a single mournful tolling? There was no doubt in my mind as to the answer to that question.

“Forth to my barge’s mooring post, the toll of the midnight bell…”

Zhang Ji of the Tang Dynasty

The Moon falls, a raven calls,

lamp; sleepless in sorrow I lie.

Outside the Gusu City wall,

Forth to my barge’s mooring