Finally Back in China 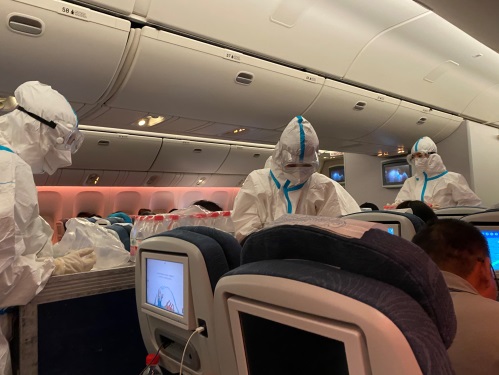 Air China crew on board distributing water and food.

Finally Back in China
Scan with wechat to share

I returned to China on September 17 after nearly eight months abroad. I have been calling China home since 2014, but I left in 2017 to take care of my family back in France, and came back in 2018 before finally settling in China by the end of 2019.

Just before the 2020 Chinese New Year, I started to hear about the new coronavirus hitting Wuhan. My family urged me to leave China. I went back to France on February 2 with a heavy heart and then spent time in Morocco. On March 14, two days before I was scheduled to board a plane heading back to Beijing, Morocco went on a complete lockdown with immediate effect. Two weeks later, on March 28, China temporarily suspended entry of most foreigners, in a bid to cut the spread of the virus. For me, the subsequent months brought a mix of sadness, introspection, hope, and despair as no light at the end of the tunnel ever appeared.

By mid-July, Morocco’s air space reopened temporarily, and I was lucky enough to catch one of the few flights to France where I spent the next two months.

On September 10, China finally reopened to foreigners who were still holding a valid residence permit, and I was luckily to be among the happy few. I got an appointment at the China visa center for a new visa that would allow me to reenter China, and on September 16, I boarded an Air China plane from Paris to Tianjin. Flights from Europe are currently forbidden from landing in Beijing and most are rerouted in Tianjin, a nearby city, where arrivals must quarantine in designated locations for two weeks before passage to Beijing.

I had really no idea of what to expect, and it ended up being quite an experience! I had to get a lab COVID-19 test dated less than three days before the flight’s departure date, which was quite a hassle in Paris. To maximize my chances of success, I made appointments with two different labs. Fortunately, I received both results on time and both were negative.

When I arrived at the airport, I started spotting people in hazmat suits and thought they were all staff. The queue for checking in was the longest I had ever seen in my life, and I have traveled quite a lot. Before arriving at the check-in counter, a staffer in a hazmat suit checked my lab test results.

I succeeded in checking-in and then moved to the boarding area where I started seeing even more hazmat suits. It started to feel like a real sci-fi movie! All the Air China crew, alongside many of the passengers, were wrapped in protective suits as if it were the new standard dress code for international travel.

The flight also had sci-fi flair, but I still slept for most of it. I woke up for breakfast which just like dinner was all packaged to avoid risk of contamination. I was a bit nervous about how the arrival process would play out, but ultimately impressed by China’s management of the situation. All passengers had two temperature checks during the flight, the second just before landing. We were handed a green paper with a bar code to collect our personal information and shown a QR code to scan with the WeChat app to identify us.

We disembarked in groups and navigated several steps. First, we had to show the green paper at a counter to a person who recorded our temperatures, and then someone at a second counter confirmed we correctly registered on WeChat’s customs app and completed another section on the green paper. Then, we went on live chat video for the interview and to display documents to an agent. Then was the health check. We were subjected to an array of tests including nose and throat lab tests and a finger prick for an antibody blood test.

We followed the designated procession and I was grouped with a few other people. Staff explained that someone near us in the plane was coughing, so we had to wait to be cleared. We waited for maybe 20 to 30 minutes in a designated area where I was the only foreigner. Few foreigners were on the plane at all. Most of the passengers were Chinese returning home. When they cleared us, we all left together on a bus. The bus stopped in an area where our luggage had been placed, and we claimed it and placed it in the bus. We then continued in the bus to a quarantine hotel in Binhai area near the airport.

When we arrived, we had to stay in the bus as our luggage was disinfected. We were then allowed to deboard. We were disinfected as well, and the staff around us as well as a few passengers were still wearing the entire protective suits like everyone involved in air travel. I was then assigned a room. The room was modern and nice, with a great view.

Everything was extremely well organized throughout the room. We were provided a two-week supply of thermometers, explanatory reading materials, bottled water, toiletries, trash bags, and paper towels. On one paper in the room featured three QR codes: one to pay quarantine fees, one to pay catering fees and one to join a WeChat group with all the people on the same hotel floor. Three times a day, meals were placed in front of our doors, and we communicated with the staff through the WeChat group. All the staffers are very nice and caring. We had to provide temperatures twice a day through a mini app on WeChat and were required to pass additional lab tests to receive quarantine release papers.

This is where I have arrived so far in the journey. I contacted my neighborhood committee in Beijing, and I was told that I would need to self-isolate for another week after arriving in Beijing. I will see how that goes, but despite that lonely quarantine feeling, I feel really happy to be back on Chinese soil.