Generation Z’s “A Thousand Miles of Rivers and Mountains” 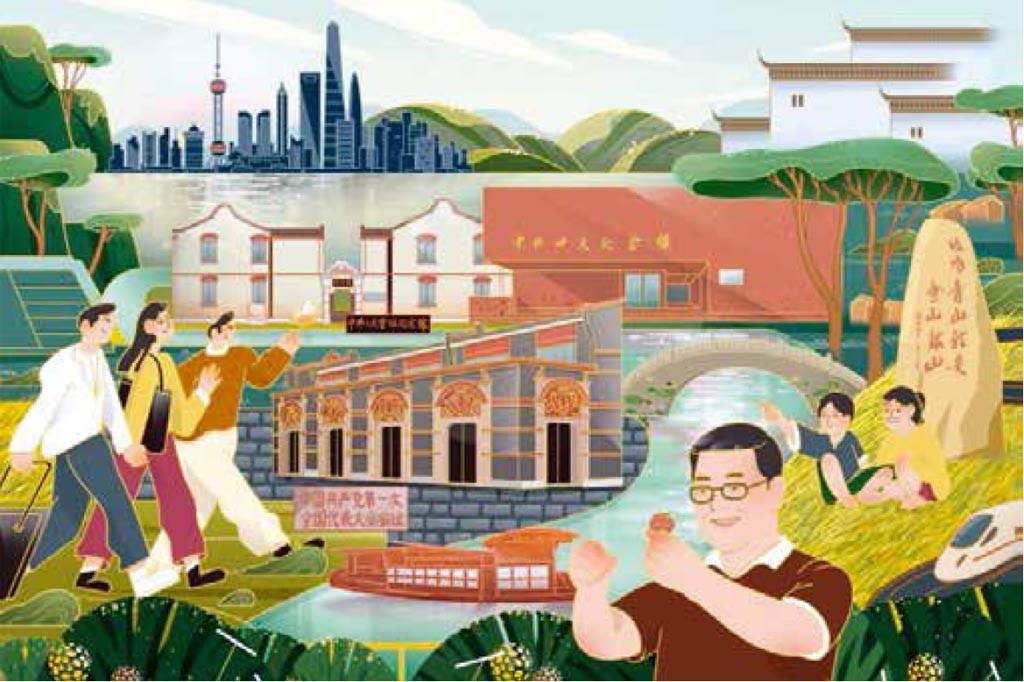 More than 1,000 years ago in the Northern Song Dynasty (960-1127), Wang Ximeng, an 18-year-old talented boy, spent half a year drawing a famous landscape scroll: A Thousand Miles of Rivers and Mountains. This 12 meters long and 0.5 meter high long precious work depicts running rivers covered with fog with the background of rolling mountains in distance. In the painting, there are not only facilities such as fishing villages, pavilions and grass houses, but also persons such as fishermen drifting in the river, sellers and buyers in a crowded market. With gorgeous brushstrokes, the artist demonstrated Chinese people’s love for life, their home and the country.

Today, more than a thousand years later, a group of young people of Generation Z (referring to those who were born after 1995), who are about the same age as Wang Ximeng, have created a scroll of a illustration with the name of Leaving No One Behind: Treasure Hunt in A Long Scroll. With pride in the achievements China has made in development, they reproduced in the new era pictures of the mountains and rivers in this country with modern science and technology such as motion graphs, animations, videos and H5 interactive games. The published works not only aroused great enthusiasm in China, but also received wide attention from the international community.

From July 2 to July 25, Treasure Hunt in A Long Scroll was launched on the platform of Bilili (www.bilibili.com), one of the base camps of youth culture in China. Twenty-four well-known uploaders on the networking platform were invited to act as “treasure guardians”, each of whom needed to select an illustration in the long scroll and post it in a motion graph form on his/her homepage. Every day, one of the 24 illustrations was unlocked and also forwarded by foreign uploaders through overseas social media platforms, presenting China’s poverty alleviation stories and beautiful scenes to the whole world. The microblog of Wenhui Newspaper headquartered in Shanghai also started a topic on Leaving No One Behind: Treasure Hunt in A Long Scroll, in which famous Tencent bloggers and ordinary netizens could discuss the scroll. Zhao Lijian, the spokesperson of the Chinese Ministry of Foreign Affairs also forwarded on his Twitter the video of the activity, which attracted the attention of foreign netizens. On Quora, a social Q&A platform, users said “this is the real China” after appreciating the scenes displayed in the scroll. When appreciating the long scroll, Generation Z who like playing games, could play the thematic games such as Guarding Treasure, Treasure Hunt and Egg Decryption.

Since its launch on July 2, this modern version painting of mountains and rivers has been posted on more than 60 websites at home and abroad, attracting more than 160 million online visitors. As of July 26, the total number of page views in Bilibili amounted to nearly 80 million, among which more than 6 million netizens participated in H5 interactive treasure hunt games. In addition, on Tencent Weibo, WeChat and short video platforms, more than 80 million related topics and articles have been read. Through immersive experience, Generation Z not only admires the development of China, but also is proud of being a Chinese.

The works of Generation Z show the Chinese culture

Treasure Hunt in A Long Scroll is a media-integrated work created by Fusion Era, a team of young entrepreneurs in Shanghai. The work was inspired by the painting scroll of A Thousand Miles of Rivers and Mountains. Visitors could drag slowly the digital scroll on a horizontal screen, just like opening a real scroll with their hands, experiencing the aesthetic feeling created by the combination of beauty of traditional ink painting and 3D modern art.

The digital scroll consists of 24 illustrations, each of which represents a region in China, vividly showing the work and life of the local people. The scroll starts from Shibadong Village, lived by the Miao ethnic group in Xiangxi Prefecture of Hunan Province, where the concept of targeted poverty alleviation was firstly put forth. It ends at the Beijing-Tianjin-Hebei region, where the Winter Olympics of 2022 will be held. It shows that 1.4 billion Chinese people are marching into the well-off era with pictures of expressways and high-speed railways, going across rivers and through mountains.

Visitors can immerse themselves in the natural scenery and cultural sites of China, and appreciate the magnificent mountains and rivers on a small screen, which could fully display the development and changes in China over the last decades.

The designers of Fusion Era try to showcase the rich Chinese traditional aesthetics, facilitated by modern communication technology. A new form of expression mainly based on interactive games was adopted in the scroll. With slow and relaxing background music, the scroll opens by itself, and the characters in it seem to come back to life. Sliding and clicking on the screen with fingers can trigger interactive games. With the blessing of emerging technologies, static images in old paintings were turned into moving scenes, and the one-way communication becomes interactive, bringing richer sensory and behavioral experience to audience all over the world. The scroll adopts the form of communication most popular among modern teenagers. New technology has not only saved traditional culture, but also made it alive. The perfect match between traditional aesthetics and modern expression shows Chinese culture in the way popular in Generation Z.

Keep a balance between informative and story-telling

In the beautiful picture of the scroll, there are poverty alleviation stories of Zhang Guimei, a rural teacher, committing herself to education in the mountains of Yunnan for decades, and the stories of Jiang Shikun, a Party secretary of a county, leading the local people to develop the mountain-based economy. These stories are highlights in the history of the Communist Party of China (CPC) in the past century, making the history of the Party more vivid and touching.

Zhang Lei, the deputy director and a researcher of the National Communication Innovation Research Center of the Communication University of China, believes that the scroll is valuable in providing information for readers and telling stories. When the CPC celebrates its centennial and a decisive victory was achieved in poverty alleviation in China in 2021, the scroll leads young people to re-experience the development and poverty alleviation in China, to remember the past and reaffirm their determination to forging ahead together for a better life. Through the introduction of famous mountains and rivers and cultural knowledge of China, the scroll of richness and harmony is a vivid portrayal of the unity of the Chinese nation. “Leaving no one behind” means everyone should be included in poverty reduction and building a well-off society, and no ethnic group in this country should be forgotten in safeguarding national unity. The scroll with delicate content design is just like a symphony of different ethnic groups living in harmony in the country.

From Wang Ximeng’s skillful ink painting to the novel and interactive media products of Fusion Era, a thousand years have passed. However, what remains unchanged is the deep love of the Chinese people towards their home and country, as well as their aspiration for a better life.