How China Got Greener 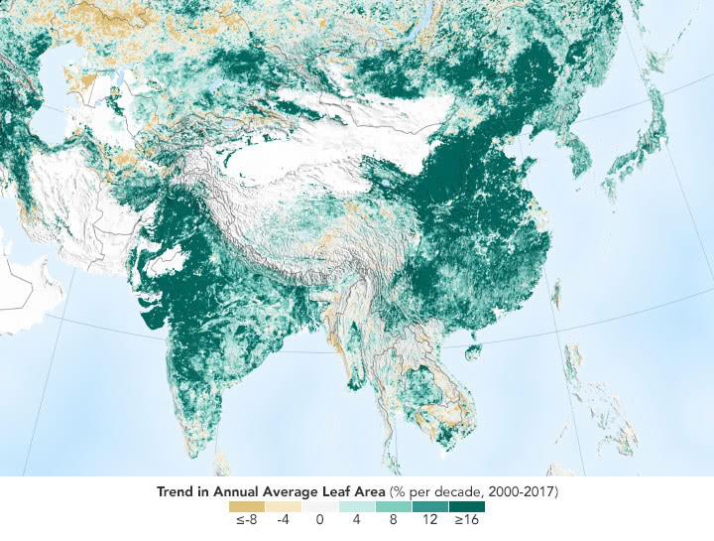 A NASA report released in February 2019 shows the world is literally a greener place because of China, together with India, greening our planet (NASA)

How China Got Greener
Scan with wechat to share

For those living in the Northern Hemisphere, now is the best season to plant a tree. On March 12, China's 40th annual Tree Planting Day, schools, families and work units organized greening rituals, with temperature climbing and the frozen ground thawing.

Awareness of the importance of tree planting growing over the past decades, it is no surprise that NASA released a report in February, announcing that the world is literally a greener place because of China, together with India, greening our planet. Based on its satellite imagery, the two countries are contributing to the largest increase in global green foliage. Data show that China alone accounts for 25 percent of the global net increase in green leaf area between 2000 and 2017.

Such a grand-scale achievement cannot have been made solely from endeavors on Tree Planting Day. It takes a nation to make such a green change, working all year round with unrelenting efforts. Greening initiatives against deforestation have been undertaken on many fronts since the People's Republic of China was founded in 1949. Many major ecological battles have been fought along the way in the quest to go green.

Since 1956, China has established 2,750 nature reserves, accounting for 15 percent of the national land area. These reserves aim to maintain the ecosystem and provide shelter for flora and fauna. The giant panda is the species that has benefited most from conservation efforts. The much-loved animal was removed from the endangered species list in 2016, while still retaining a vulnerable status. Decades of protection brought their numbers back from the brink of extinction. New ecological corridor programs are underway to restore and improve pandas' habitats, which were destroyed due to traffic patterns and human activity.

The year 1979 witnessed the birth of the Three-North Shelter Forest Program. Extending from the northeastern to the northwestern tip of the country, the project covers more than 40 percent of China's land area and will continue until 2050. The ambitious program has effectively decreased desertification of the land, reduced air pollution and mitigated the negative effect of climate change. More positive results are expected.

Chinese people once had to reclaim land from forests, grassland and the sea to provide food, but later realized that the price they had to pay was too high. Since 1999, a project to convert degraded farmland into forests and pastures has been underway. Farmers are given subsidies to give up degraded arable land for afforestation and grass plantation, and close certain mountains for forest rehabilitation.

In these battles to defend Mother Nature, being champions of Earth may seem to be a humble thing, yet the deeds of green heroes speak for themselves. Jia Wenqi and Jia Haixia, two physically challenged farmers in their 50s from Yeli Village, Shijiazhuang, in north China's Hebei Province, planted more than 10,000 trees on wastelands over 15 years. The former is blind and the latter lost both his arms, yet together the two men created a forest out of nothing. "He has eyes and I have arms. Who says we cannot do this?" said Jia Wenqi, when asked how they had managed to achieve such a feat.

Other unsung heroes may not have a tale to tell individually, but collectively they created one miracle after another. The Maowusu Desert in Shaanxi Province and Inner Mongolia Autonomous Region in the north, once one of the largest deserts in the country, has been greened by local farmers. Over 50 years, they have creatively fought against ferocious sandstorms and developed the area's agriculture and forestry. The hundreds of millions of trees they planted have turned yellow sand dunes into a green belt, thus reducing the annual soil erosion by millions of tons.

In the field of ecological conservation, enterprises have more resources and skills to practice their social responsibilities. The Elion Resource Group has been striving persistently and consistently for 30 years, transforming the 6,000-square-km Kubuqi Desert in Inner Mongolia into swathes of green, lifting more than 100,000 people out of poverty in the process. Elion's Chairman, Wang Wenbiao, became the first Chinese to receive the UN's highest environmental honor for his determination in making desertification a lifelong career.

The Saihanba Forest Farm also won UN recognition for inspiration and action. Three generations of locals in Saihanba in Hebei planted the largest artificial forest on Earth. The farm, covering an area of 200 square km, is called the Green Lung of the north. It serves as a gigantic windbreaker that shelters Beijing and its adjacent areas from wind and encroaching sand, just like the Wall against White Walkers in Game of Thrones.

People are the masters of their land who can conquer deserts and create forests. It is through painstaking efforts that China has become greener and leafier. On this journey full of hardships, a consensus has been reached that green mountains are mountains of gold and clear waters are streams of silver. They are the goal worth fighting for. They can be reached through each single greening action, so get your hands dirty and plant a tree.

This article is reprinted from Beijing Review.